The main problem with smartphones today is their autonomy and storage capacity. If autonomy can easily be increased (or renewed) thanks to a power bank, that’s another story for storage. Because apart from some Android smartphones which have a MicroSD slot, it is not necessarily easy to extend or easily renew the capacity of your smartphone and even less of your iPhone. ORICO Backuper is a new product developed by the manufacturer ORICO. It is not yet commercially available but it is a product that seems rather attractive since it is a backup system for mobile terminals. A practical product for easily backing up data from your terminal, including on the move, and thus freeing up space to be able to (re) take new pictures and new videos.

The Backuper is compatible with both Android devices (smartphones and tablets) and iOS devices (iPhone, iPad, iPod Touch). It works of course with any PC, MAC, etc. computer since it is a hard drive or an SSD all that is more classic that takes place inside the case. For the moment, the ORICO Backuper box is not yet marketed, but the manufacturer hopes that his project will materialize soon since the Kickstarter campaign that he has launched is not yet finished which the objective has now. already been achieved and even exceeded. More than $5,400 was raised of the $5,160 needed to fund the project. 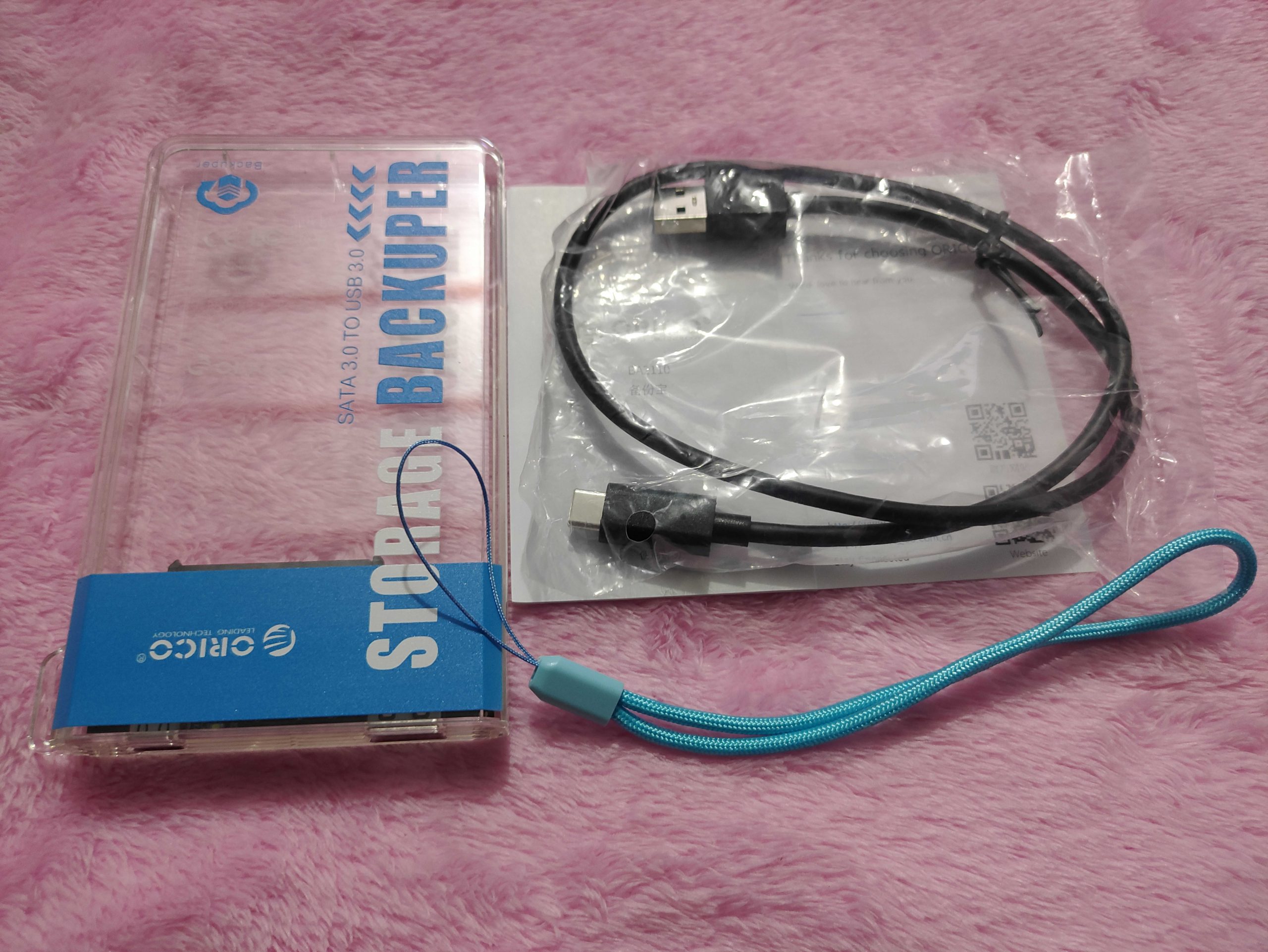 The box is delivered with a USB C to USB A cable which will serve both for powering the Backuper and for connecting it to a computer. This is how the data from the Backuper will pass to a PC or a MAC. Also included in the box are instructions for use and a wrist strap.

What’s in the box: 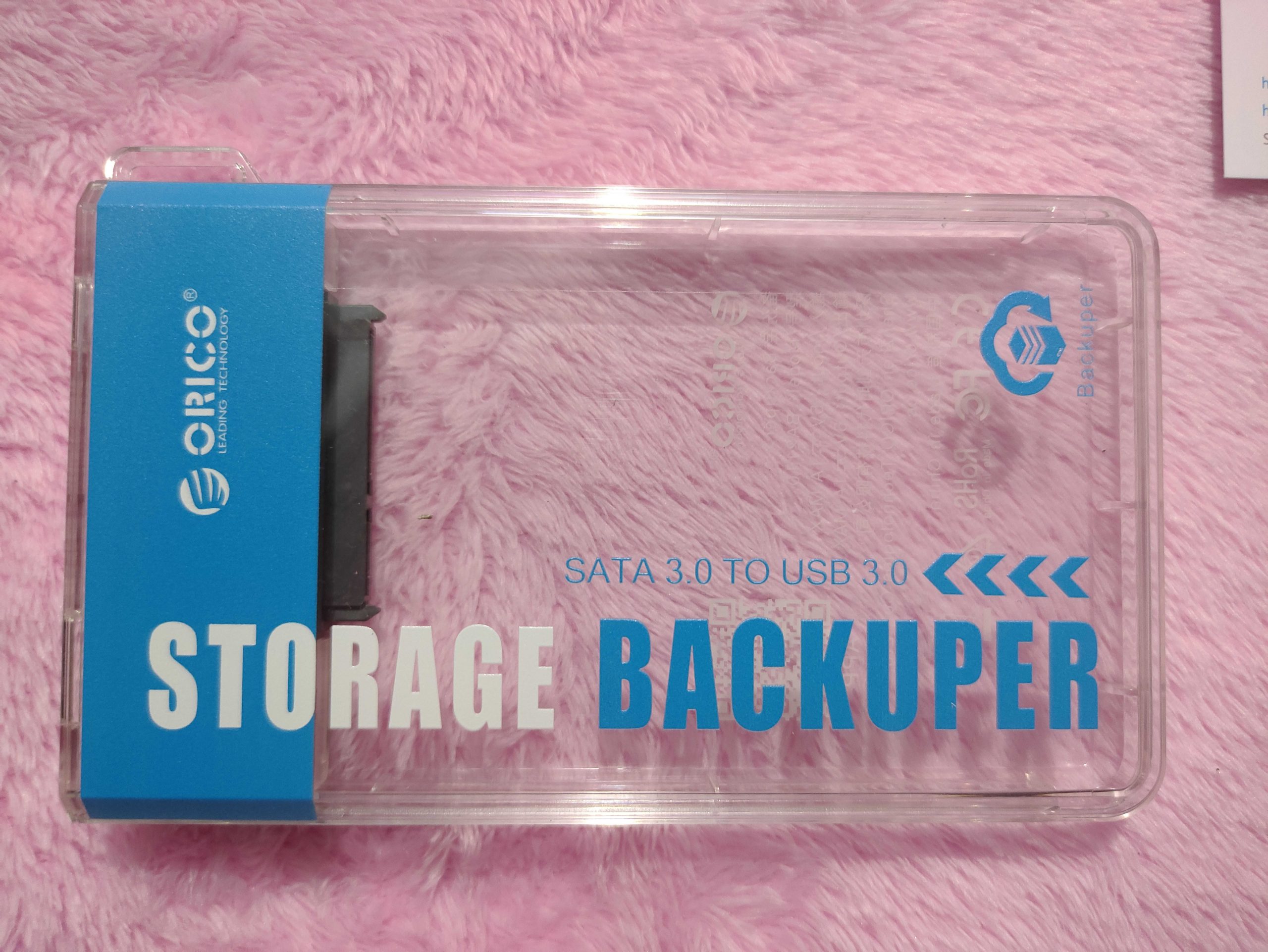 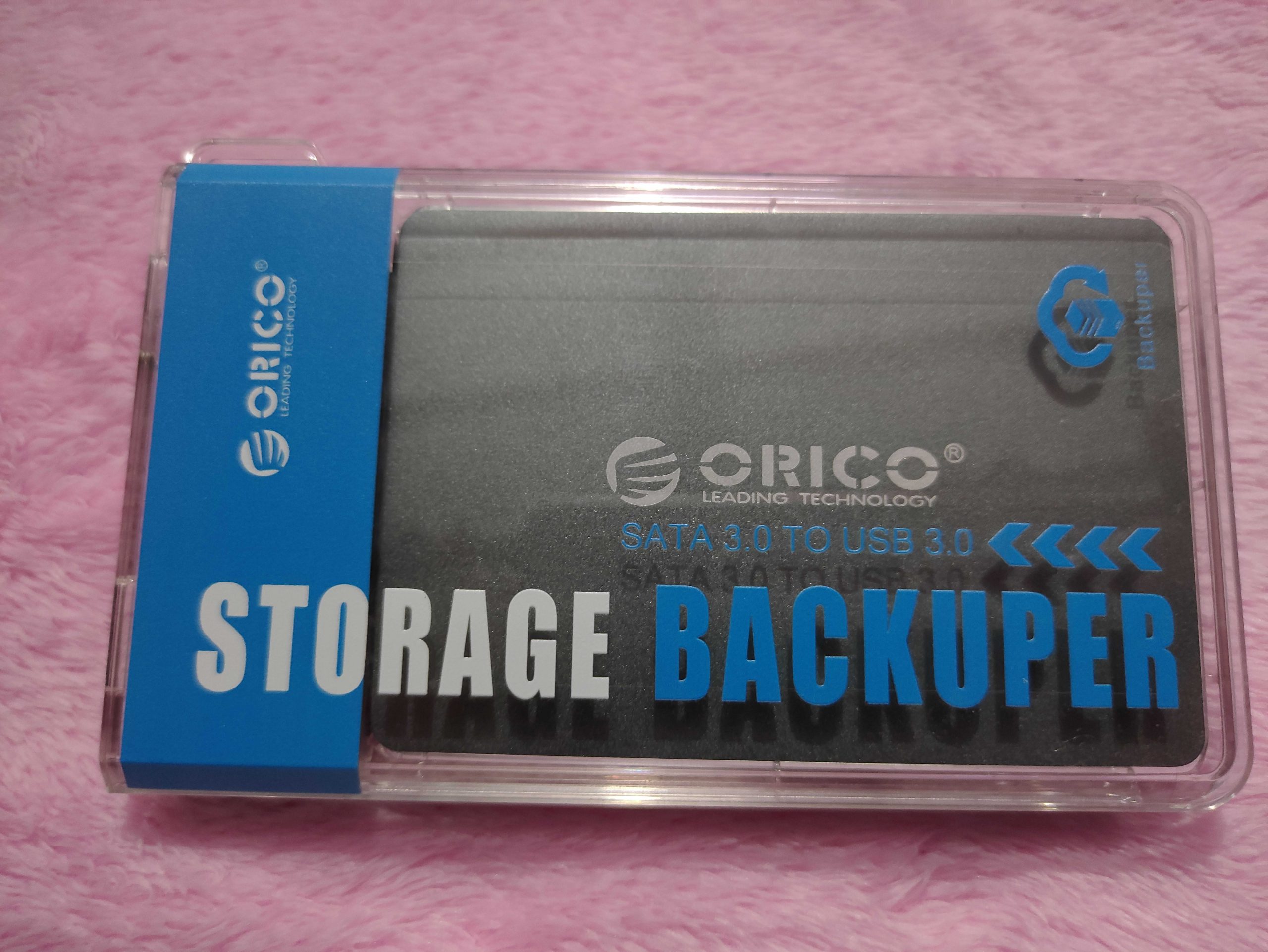 The appearance looks similar to the ordinary hard disk box, with transparent PC material and blue and white colour printing embellishment, it looks more fashionable and beautiful in appearance. In terms of functions, ORICO Backuper is more powerful than the hard disk box. Through APP software management, the pictures, videos, documents, address book and other data in the mobile phone can be backed up to the personal hard disk so that it can be stored and read quickly. The effect of one-click incremental backup.

In addition, in terms of structure, the installation and disassembly of the Orico Backuper are very convenient. The whole process is tool-free. It has a push-pull design. When opening the cover, press it slightly and then slide it along the guide rail. After opening the cover, Insert your 2.5-inch hard drive into the internal SATA port and close the lid. 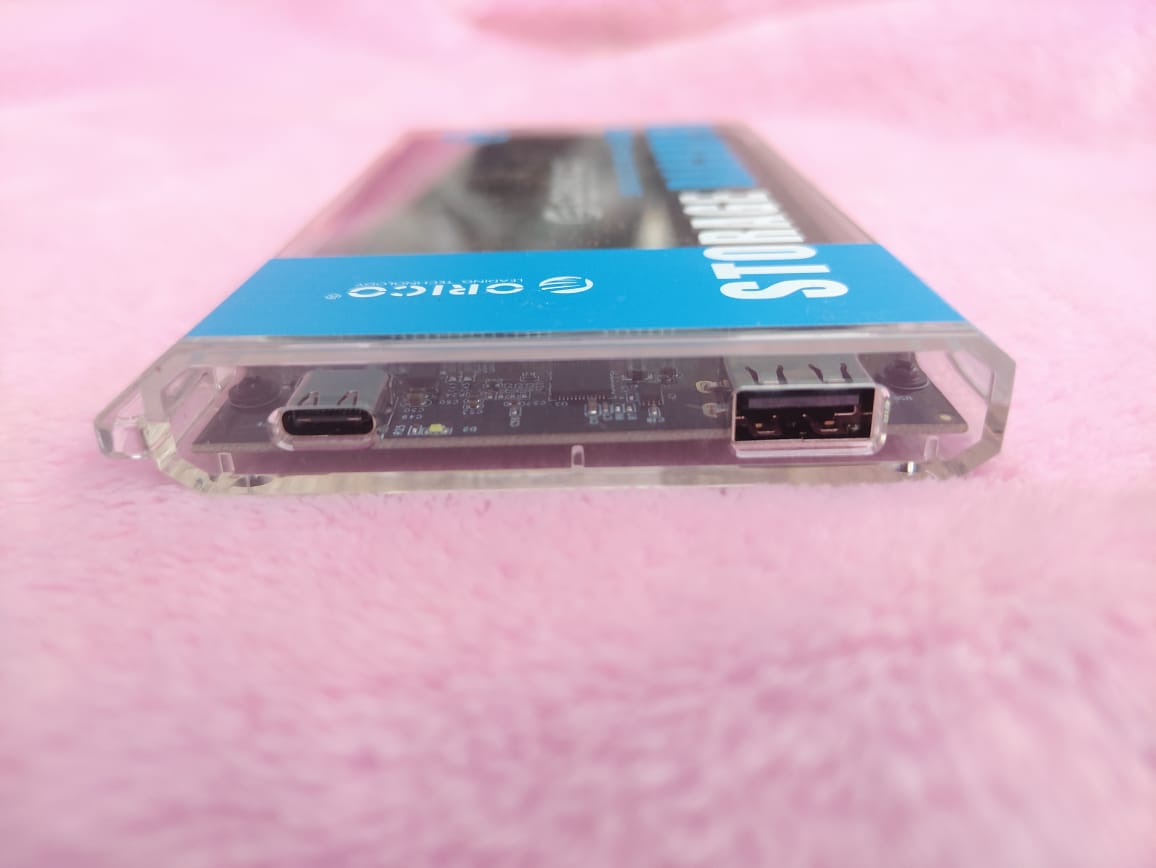 As you can see, there are two USB connectors on the other side. The first (left-most) is a USB Type C connector which is used for power. Just connect the USB C to USB A cable supplied with the Backuper to power the beast. Note however that no AC adapter is provided by the manufacturer. You will therefore have to use either your smartphone’s power adapter or connect it to your computer or use an external battery such as a power bank, which will allow you to use the Backuper on the go.

The second connector is a classic USB 3.0 (type A) port. This is used to connect the smartphone or tablet that you want to save Note that the cable is not provided there either. So you will need to use your own USB to Lightning cable to backup iPhone / iPad / iPod Touch and or your own USB to micro USB / micro USB C cable for your Android devices. 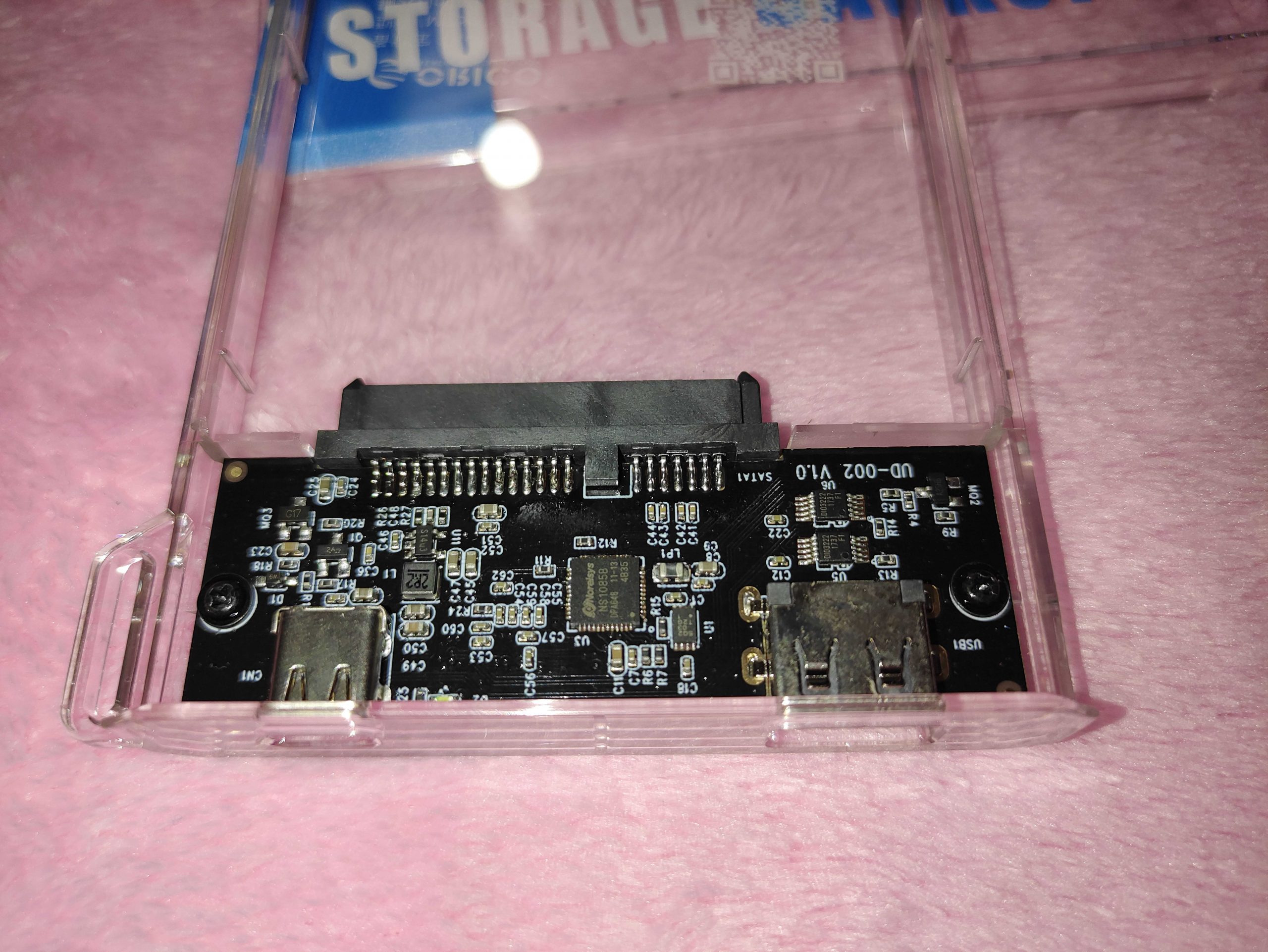 On the back of the Backuper, we discover some interesting information engraved directly on the hull. In addition to the brand and model of the product; we learn above all that to operate the Backuper requires a power supply capable of delivering; 5 Volts and a power of 1 Ampere. You can also see a QR Code which, once flashed; allows you to directly download the application necessary for the operation of the Backuper. 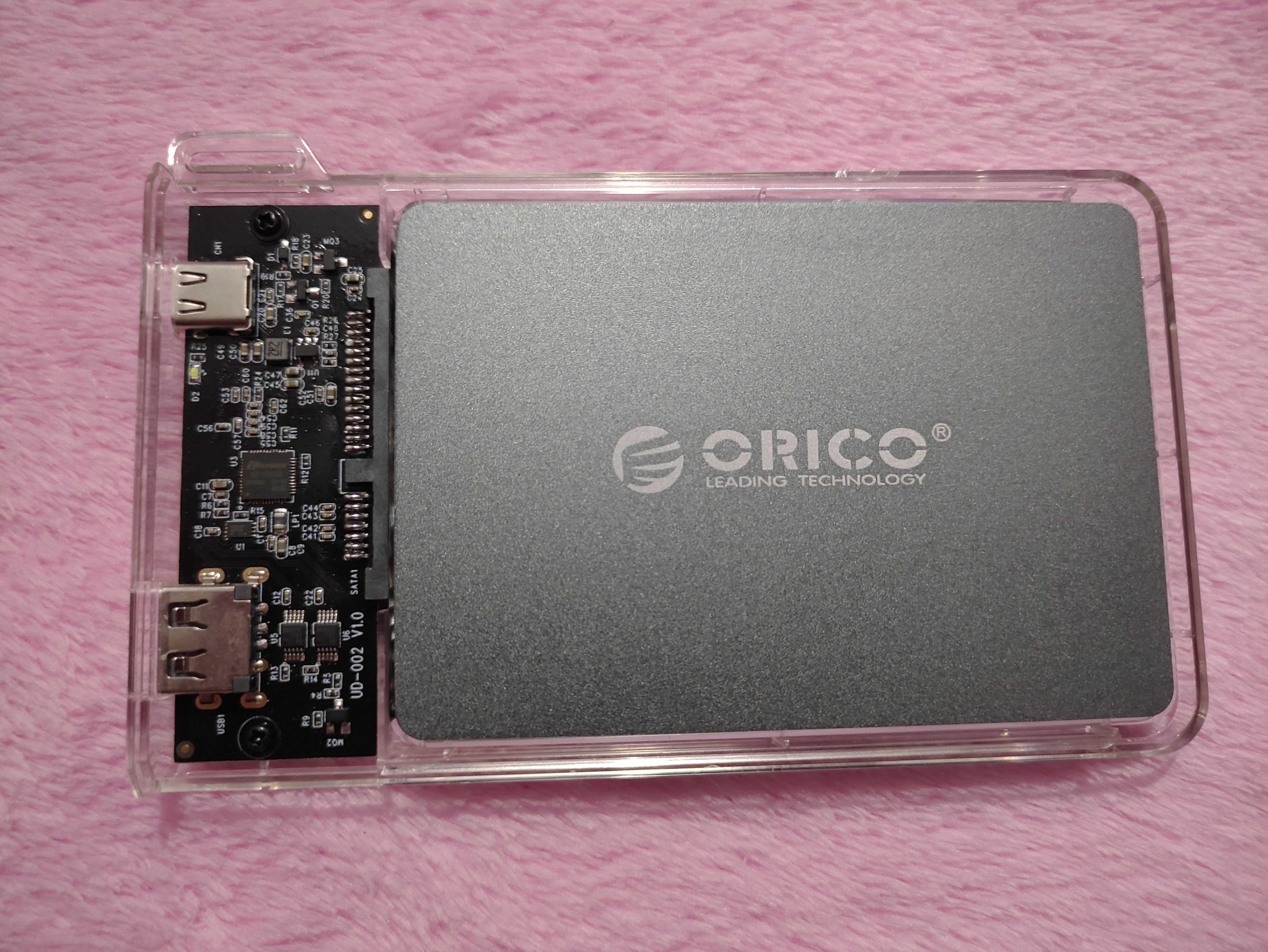 To use the ORICO Backuper, you will need to insert a disc inside the box. You can take the disk of your choice … As long as it is in the right format (SATA / 2.5 inches). According to the manufacturer, the Backuper supports SSDs and HDDs up to a capacity of 2 TB. Note that ORICO also sent us ORICO H100 (256GB) SSD 2.5″ disks with a 5-year warranty.  To install a hard drive or SSD inside the Backuper, nothing could be simpler! All you have to do is slide the chassis of the case a bit like the Orico 2588us3 case to have access to the SATA connection. Then just plug the hard drive (or SSD) into the connector And There you go! Nothing’s easier. 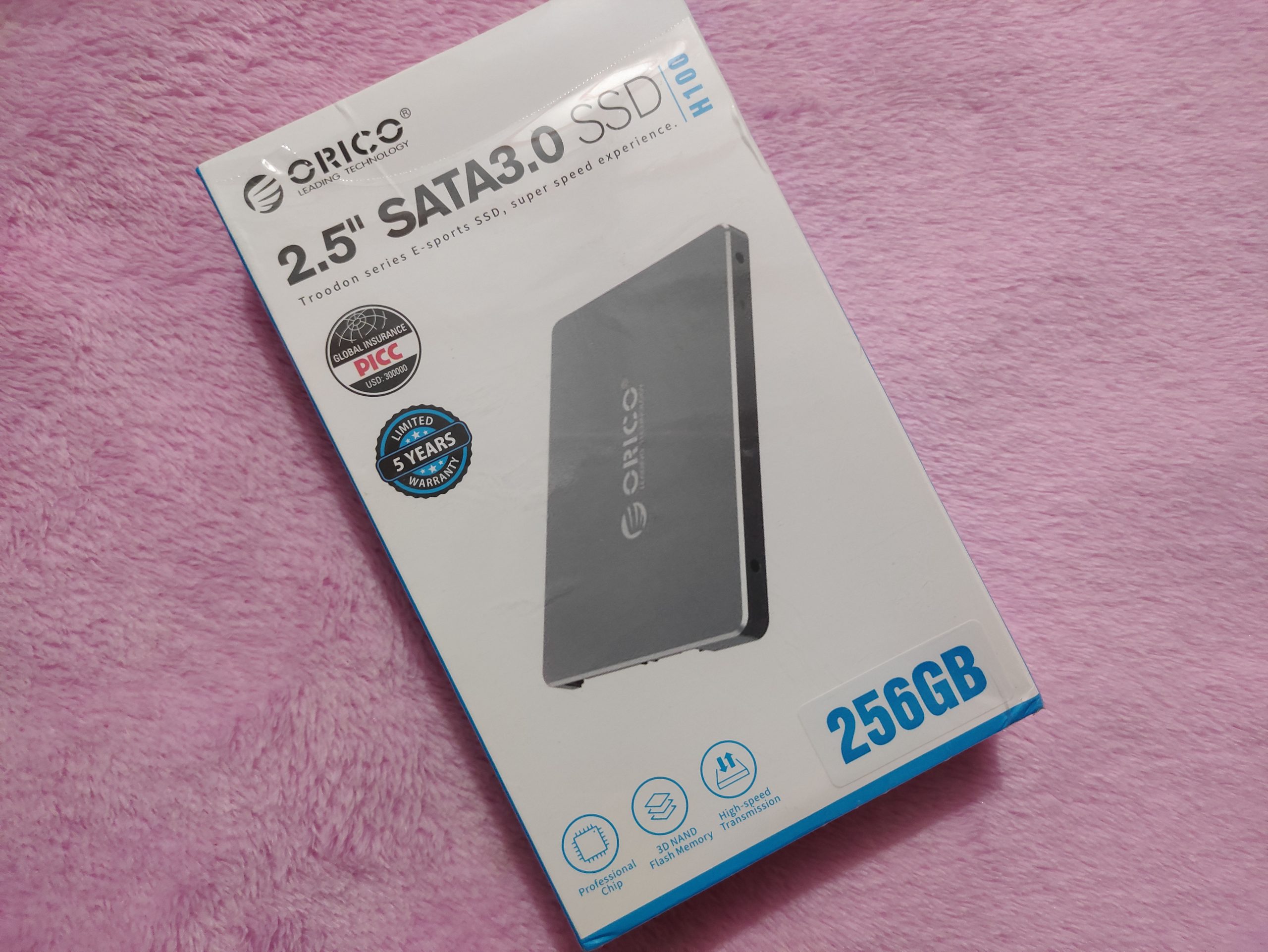 As an old domestic peripheral manufacturer, ORICO has been working hard in the field of solid-state drives since last year. It has successively launched a number of Athlon series of SSD solid-state drives, so this solid-state drive is basically the same as other products in terms of packaging style. Similarly, the concise outer packaging contains detailed descriptions of product pictures, features and specifications. 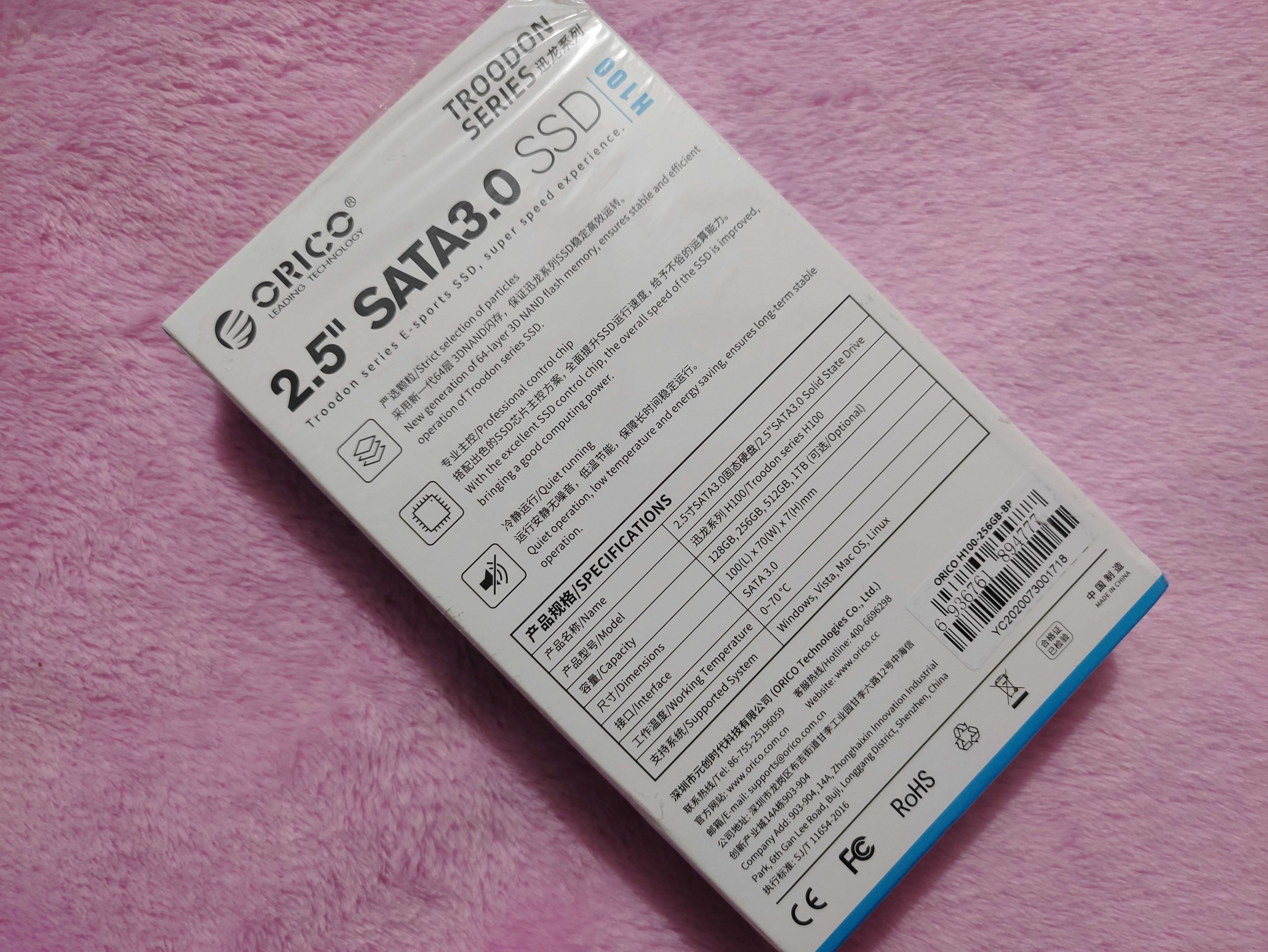 This Orico solid-state drive adopts DSM2258XT/SM2259XT master control solution, with SATA Revision 3.0 interface, 3D NAND flash memory particles, and has a theoretical 6Gbps rate. It also provides 128G/256G/512G and 1Tb storage capacity options, which can quickly upgrade the computer performance. Of course, the manufacturers do not promote their own hard drives. The compatibility of the ORICO Backuper is even more extended. It can be used with idle 2.5-inch machines and solid-state drives. 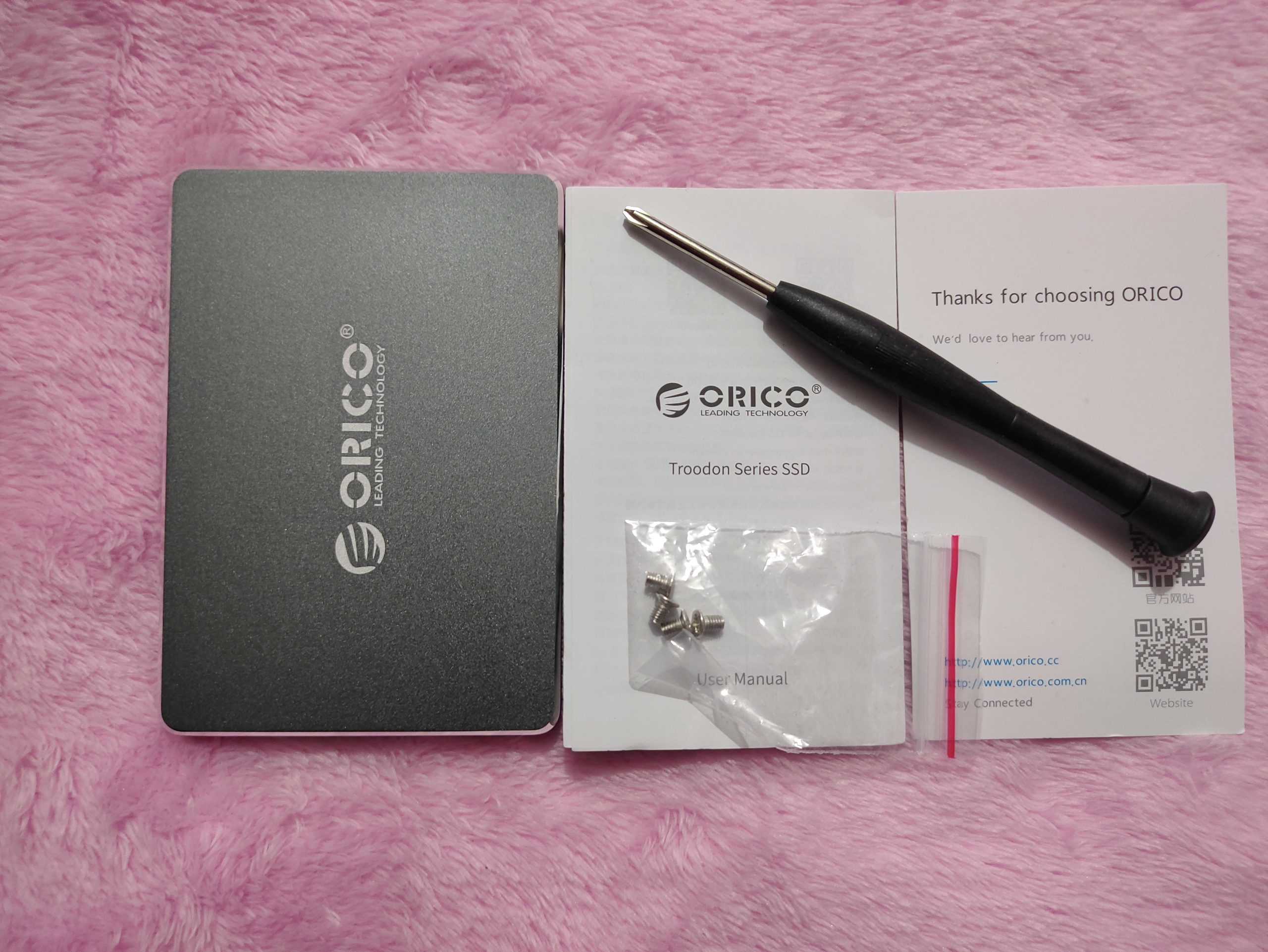 Here is just an ORICO H100 (256GB) solid-state hard drive out of the box. ORICO H100 solid-state drive has a strong Oreko style in design, simple atmosphere, the middle of Oreko LOGO and CNC trimming are full of texture. The label paper is affixed on the back, which explains in detail the product model, capacity, serial number, power consumption and so on. You can also check the authenticity and warranty by scanning the QR code and entering the serial number, which is very good for users. 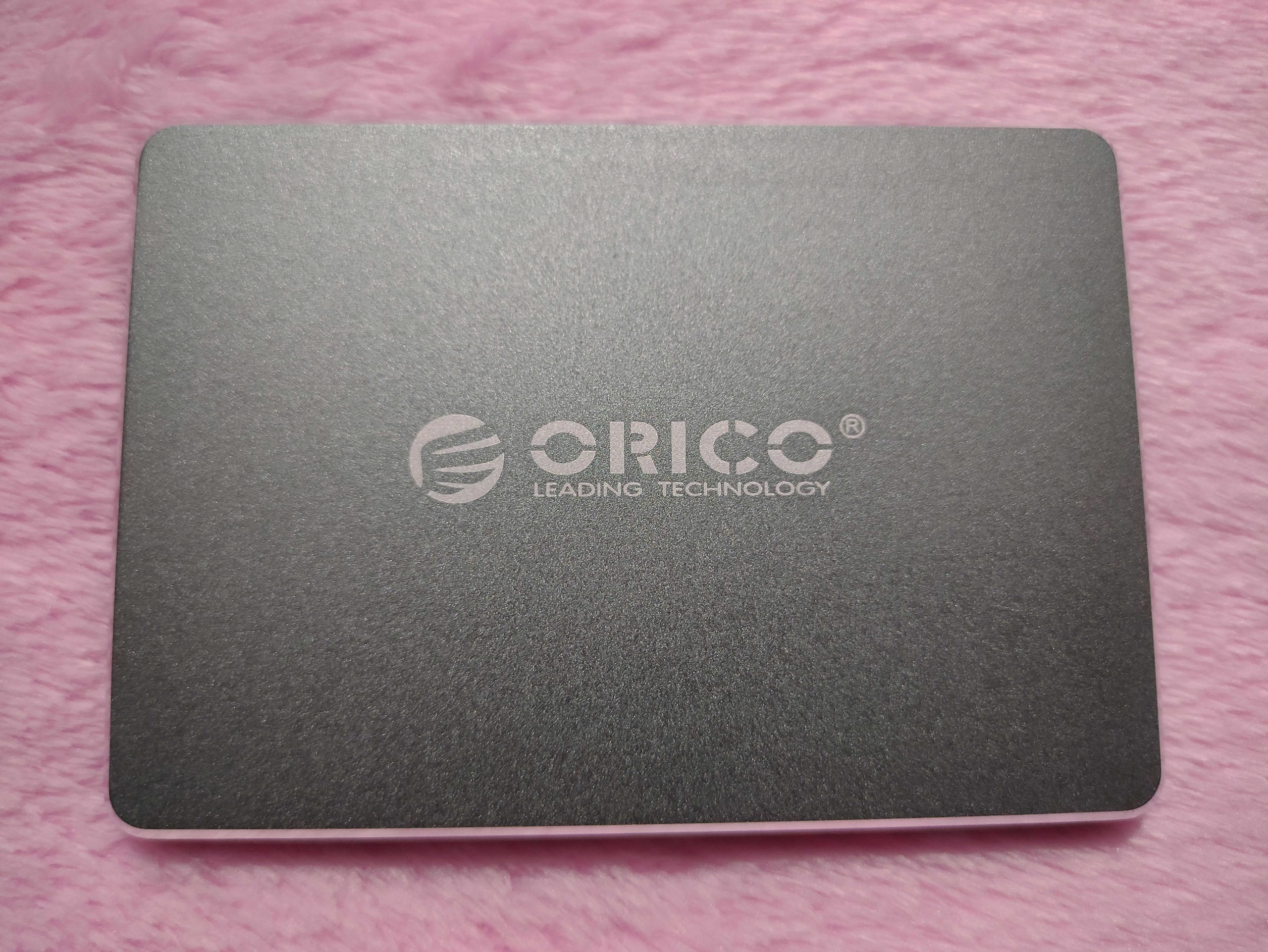 As for the interface, it is also the traditional SATA data interface and SATA power interface. Of course, in order to facilitate the installation of the ORICO H100 solid-state drive, there are screw holes in the bottom and screw holes in the frame to meet the needs of different consumers. 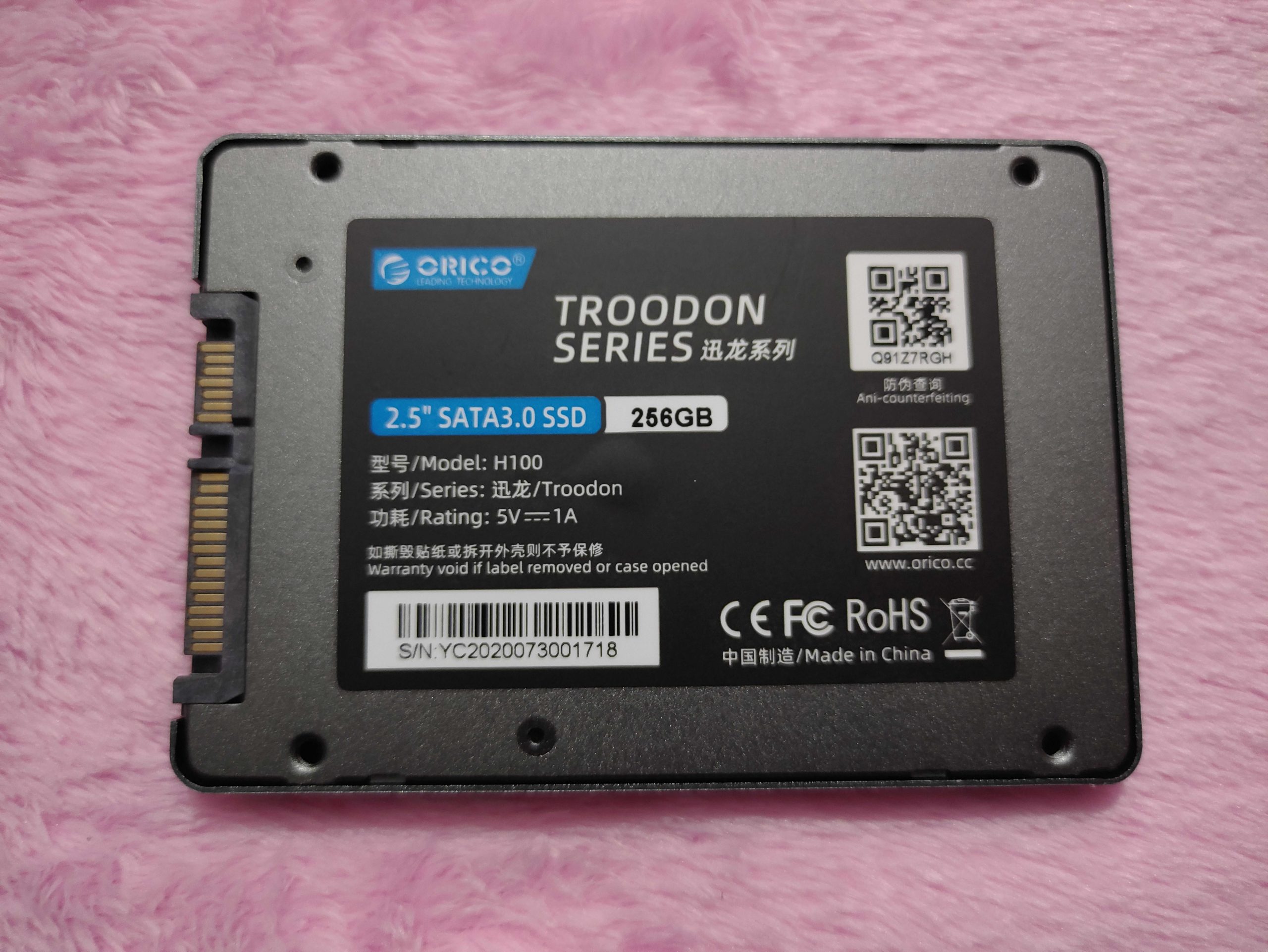 Before using it, understand that the ORICO Backuper has Type-A and Type-C two interfaces. The A port is connected to the mobile phone for transmission and backup, and the C port is connected to the charger or mobile power supply for power supply. It can also be used on the computer side. , As a port for connecting the ORICO Backuper to the computer. 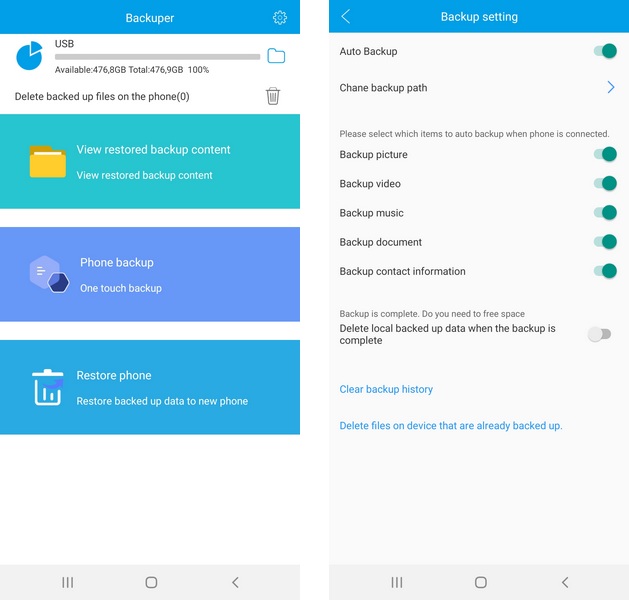 To save and synchronize data between the Backuper and a smartphone, it is necessary to use an app. For this, the manufacturer offers the “iStore Pro” application available on iOS and Android, which can automatically back up the data with one key, with a simple interface and simple operation. After the APP installation, connect the backuper to the phone, you can see that the indicator light is always on after the product is powered on, and the indicator light flashes when reading and writing data, the working status is clear at a glance, and the use is simple enough that the elderly and children can easily operate degree. 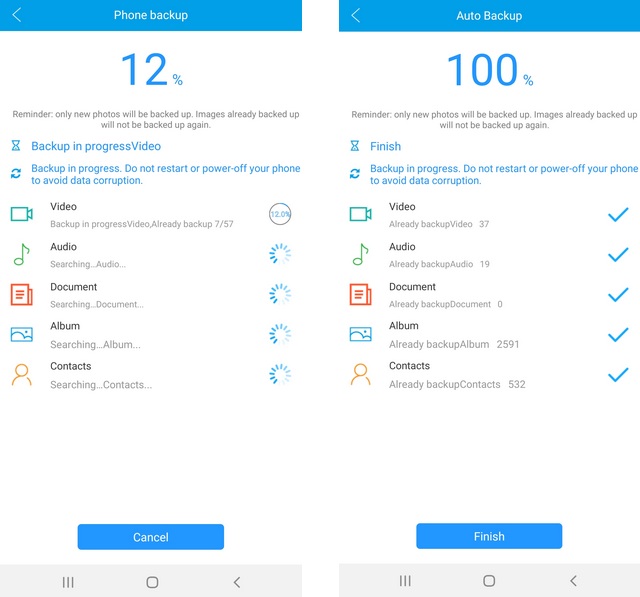 You can see that the contents of the backup, including pictures, videos, songs, files, and contacts, can be backed up to the hard disk so that the storage space of the phone can be freed up, and the “incremental recognition” is used to automatically retrieve the backup records, and completely say goodbye to the repetition. Backup. Support smart hibernation technology, enter the hibernation state after 10 minutes of inactivity, avoid the long-term operation of the device and increase the service life of the hard disk. 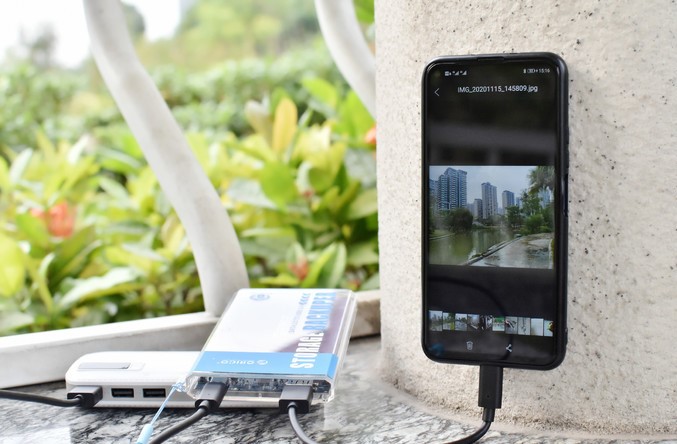 In use, the ORICO Backuper is a carrier of the hard disk, which is connected with the mobile phone APP through the data cable, and the storage content of the hard disk can be easily viewed and managed through the software. It supports one-click deletion of the backed up files on the mobile phone to instantly release the capacity space. The mobile phone data is stored in the personal hard drive. The ORICO Backuper is not only compact but also comes with a lanyard for easy carrying. Compared with the various troubles of using cloud backup, this one can be written in your hand. safe. 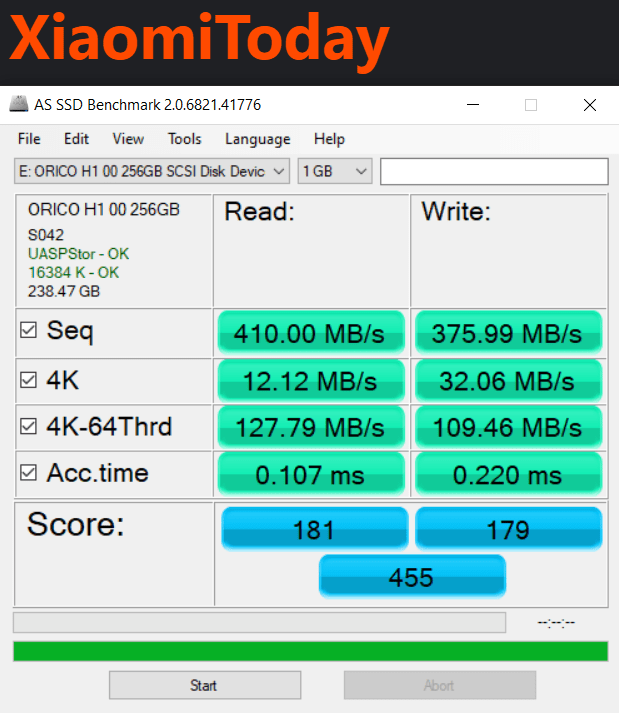 Through the speed of backing up data on the mobile phone; you can feel the high efficiency brought about by the cooperation of SATA 3.0 and the USAP acceleration protocol. In addition to being connected to the mobile phone; the ORICO Backuper can also be used as a mobile hard disk to connect to the computer. The reading and writing of the ORICO solid-state drive through the AS SSD Benchmark test on the computer is 410.00 MB/s and 375.99 MB/s; the speed of copying large files from the computer; to the backup, hard disk is also relatively fast, which can reach the speed of 1G second. But the transmission speed may vary due to equipment factors, so it is for reference only.

A brief summary through the experience, the product is embellished; with transparent PC material and colour inkjet style, compact and portable, and full of value; through the combination of mobile storage and mobile phone backup, you can easily back up photos; videos, music and documents from the mobile phone. Not only can easily cope with the lack of memory of mobile phone; users but also can browse the backup content anytime and anywhere on the mobile phone or computer, which is safe and worry-free.

We really liked that the case is completely tool-free, allowing you to change the storage unit wherever and whenever. Although it has a limited capacity of 2TB, as we can easily install any storage unit; its capacity is practically infinite. It works excellently for making backups from a smartphone; it connects to SmartTV without problems and the data transfer speed; with the SSD unit that we have put in is very good. The truth is that this ORICO Storage Backuper drive has a downside and it is the LED status indicator. This one, despite being very small, has a very strong shine and looks a lot. It would have been better to put a resistor before to reduce the intensity or opt for an LED diode that was of low brightness.

The ORICO Backuper is currently available on Kickstarter for around HKD $199, that’s USD $25, which isn’t reasonably priced. You can check out their Kickstarter page here.