We have become so addicted to technology that we look for perfection, specifically in smartphones, that apart from great features and a striking body are also at an affordable price, this being the concept, the CUBOT company takes the points, since In its extensive catalog we will find the right equipment for our needs, an example of this is the  CUBOT MAX 2 , which promises to guarantee hours of entertainment, but today we will focus our attention on its most recent release, the CUBOT Quest, a highly resistant terminal that comes to meet the ambitions of all-terrain users, which is worth knowing.

Buy The CUBOT Quest smartphone On Gearbest For $124.9964GB variant 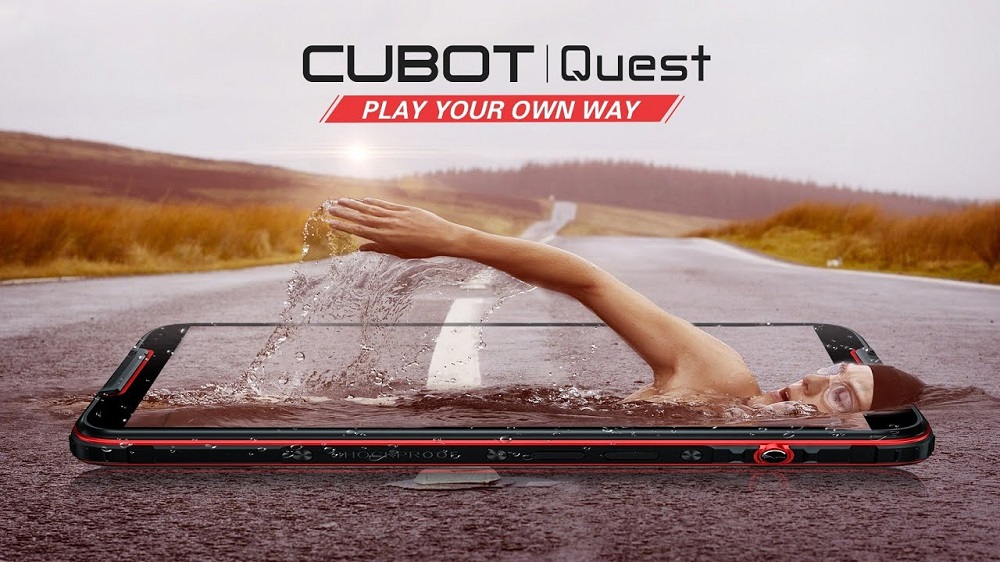 The CUBOT Quest comes in a simplistic and quite small package  , according to the size of our team, with a weight of:  0.35kg. Apart from that, we appreciate a very seductive image that uses a black background color plus some elements in orange, blue and yellow, while in the center we observe the name of the model in gold,  in this way it prepares us to discover the interior of our box, in which we will find:

Check Out The Banggood amazing summer prime sales. Don’t miss out on these amazing deals.

A device highly praised for its appearance is our CUBOT Quest, who rejoices in an image with strong character that denotes its endurance in extreme activities and that is combined with a refined body, being ideal for any occasion. At first glance, we can appreciate a stylized device  nothing heavy or bulky, if so, because despite being rugerized  is an ultra-thin design with a weight of:  180 grams  plus the following dimensions: 157 x 73.7 x 8.8 mm. 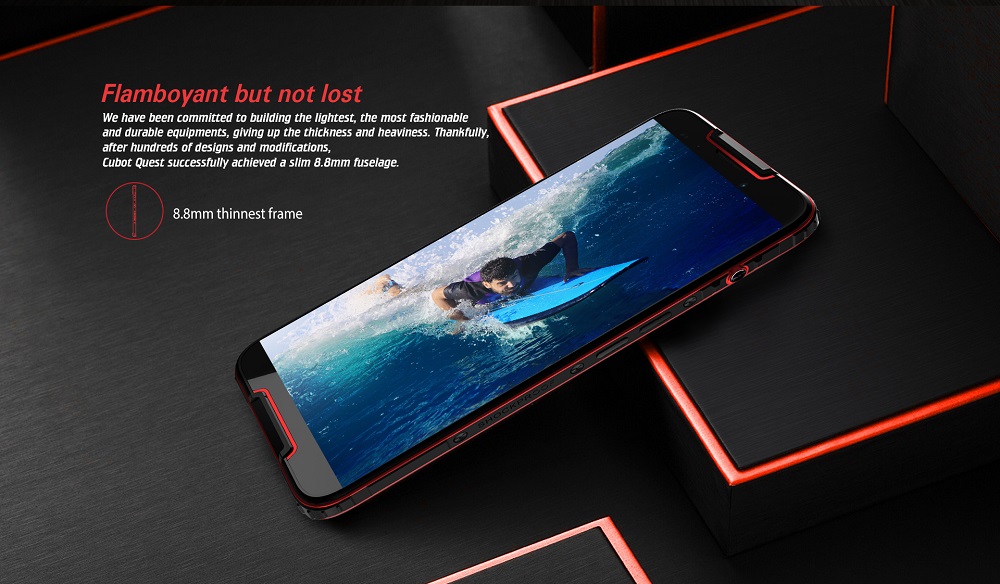 Continuing with its appearance, we have a combination of red and black that gives vitality to our mobile. For its construction, which has been praised by critics, has made it clear that its main objective is to be very durable and resistant to any inhospitable environment in which we find ourselves, using for its structure  polycarbonate and metal,  a combination that makes of the mobile a strong team before falls, scratches and even water, subject in which we will delve later, in turn, is covered with a rubber against impacts. 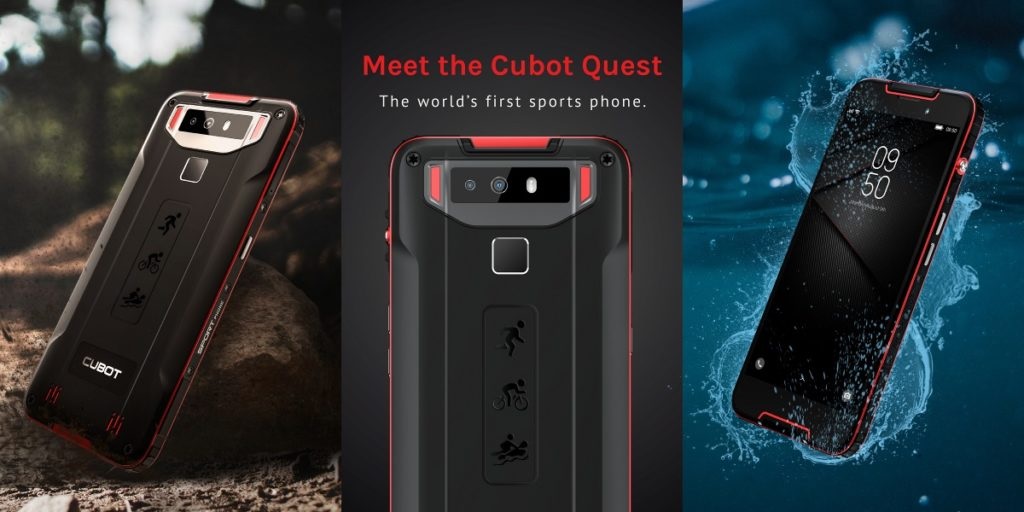 Going into details, we have the usual endowments, which are encapsulated in the metal edges to protect them from dust and water, so these elements are the following:  the speakers, the USB input port, the on / off buttons ,  the volume, slot for SIM cards, a 3.5 mm audio connector,  while on the back we will appreciate the dual cameraaccompanied by a  double LED flash and the fingerprint scanner,  finally we see in the middle an engraving with the activities that can be exhibited, for example: Running, cycling or swimming.

More and more smartphones that meet our basic needs, so when a team that bets high comes to the market completely falls in love with us, in this way the CUBOT Quest stands out for being a mobile for extreme activities or sports, ie circumstances to which we do not normally expose our phones. This model offers  IP68 certification. What does that mean? Well, it is designed to ensure that the product can withstand both water and dust, falls, bumps and even survive extreme temperatures, from -20ºC to + 55ºC and withstand up to -40 to +77 centigrade. 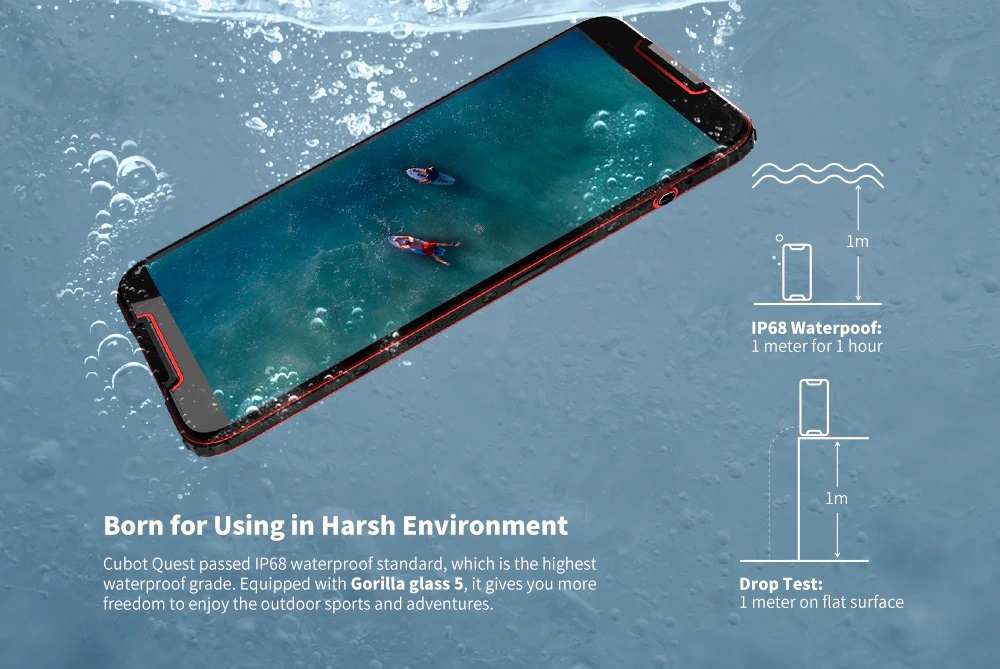 Finally, you can survive fall 1.2 meters high and submerge 1 meter in the water for 1 hour without suffering consequences

The CUBOT Quest offers a screen with IPS IPS technology   that has a size of 5.5 inches ,  with an aspect ratio of  18: 9, a pixel density of 293 PPI  and an HD + resolution  of 1440 x 720,  plus it is observed in its upper part the  front camera and the speaker . On the other hand, it has Corning  Gorilla Glass 5 protection  ,  which extends throughout the front panel, providing excellent visual performance and protection against scratches and / or bumps. If this seems like little to you, it also has sensitivity for touch , covers 90% of the NTSC color and has acontrast of 1300: 1. 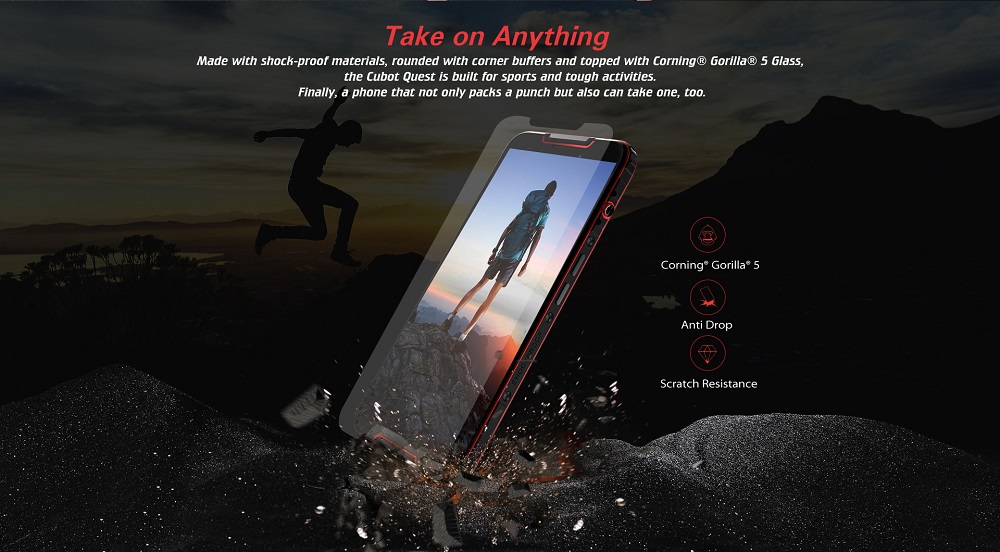 The CUBOT Quest without a doubt proves to be a perfect option for the lovers of the extreme, but that is worth a resistant aesthetic without a performance to the measure, for such reason, this device comes equipped with a  MediaTek MT6762 Helio P22 Octa Core processor  of Vanguard, with the new process of 12 nanometers  and working at a frequency of  2.0GHz  and added to this, we have a graphical unit  (GPU) PowerVR GE8320,  which works at a frequency 650MHz .

As for  RAM, it  comes with 4GB,  while for  ROM, it  has 64GB  and it is expandable by a micro SD card of up to 128GB. Extra points for being powerful enough to play massive games without getting stuck or generating too much heat. 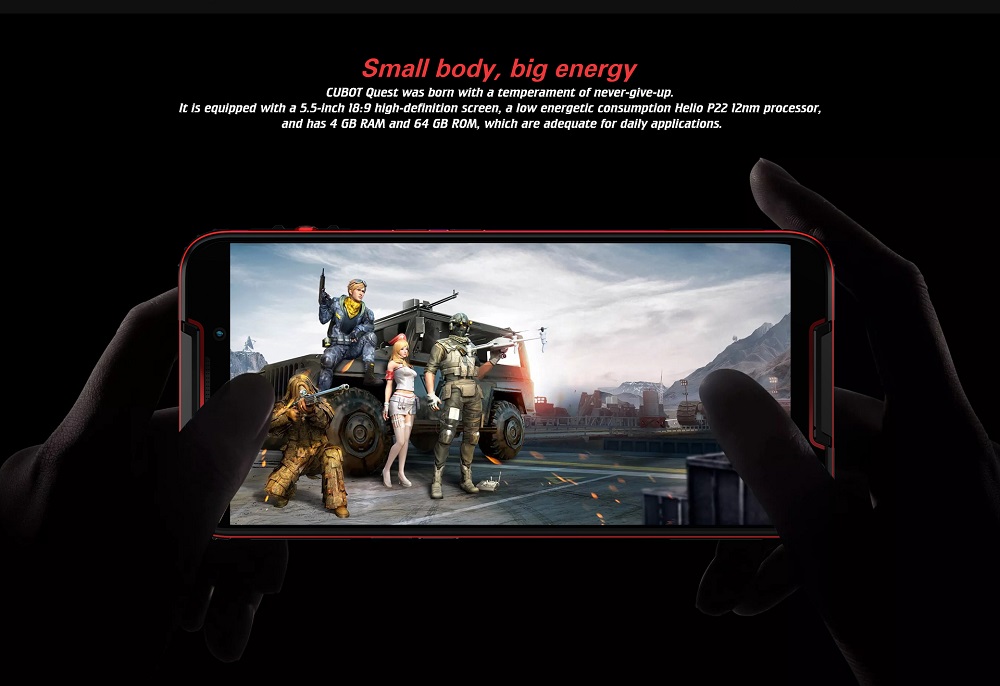 To complete, has an operating system widely recognized worldwide, we refer to  Android 9.0 Pie ,  which offers us a really smooth operation, delighting with extremely fast loading times and if this is not enough, smarter algorithms and better user experience in general.

While this section does not change much in each team, in this we want to highlight that it provides  NFC connectivity  to pay with Google Pay in countries that support this function, an option that some devices lack. As for the rest of the connections we have:  Wi-Fi Dual Band,  supporting standards  a, b, g, n and ac  more  Bluetooth version 5.0,  navigation  GPS / A-GPS / GLONASS  and support mobile networks  2G, 3G and 4G LTE that I could not miss.

In addition to this, it is complemented by a series of sensors, which are:

Regarding mobile networks, it supports the following: 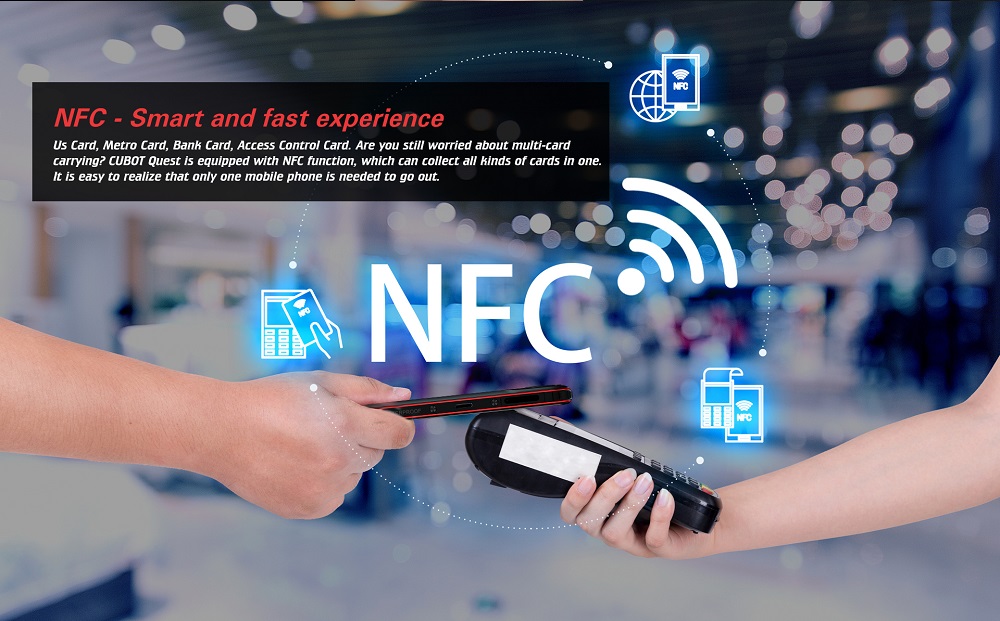 As for its photographic section, the CUBOT Quest does not depart from the concept of the  CUBOT MAX 2,  that is, it maintains 3 cameras, positioned one on the front and the rear dual camera, which is equipped with  Sony IMX 486 sensors and a lens 6 components of 12MP + 2MP  and aperture f / 1.8, in addition, offers us functions such as: Dual LED flash, PDAF function and with 1080p video recording. 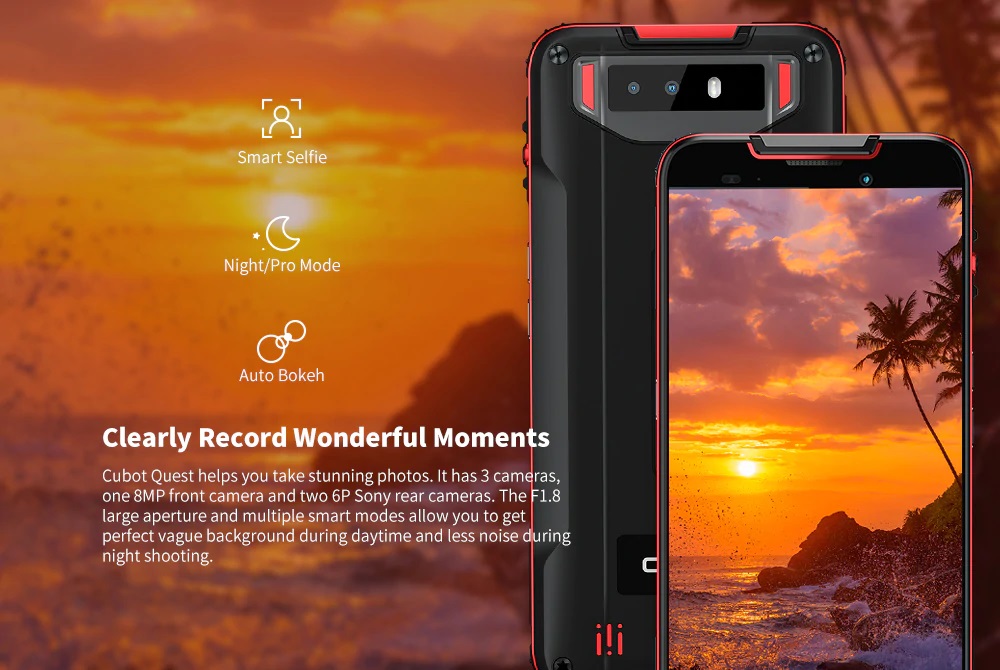 As for its front or sefies camera, it  comes with an 8.0 megapixels sensor, a 4-component lens  with aperture  f / 2.2and fixed focus function plus facial recognition, also, it is optimized in real time to improve your images, generating a professional touch

The CUBOT Quest guarantees us entertainment to the fullest with a performance capable of providing hours and hours of use, thanks to a  lithium-ion polymer battery  with a capacity of 4000mAh, which allows fast charging (5V / 2A) charging up to 100% in 2, 5 hours and offering up to 13 hours of work.

Where to buy it?

Currently, we can find the  CUBOT Quest on Gearbest with a discount of 26%,  remaining at a price of only  $139.99  and the change would be ( € 124), for that reason, if you want to enjoy this beauty do not delay in acquiring it. Then, we will leave the purchase link in case you are interested in this incredible device:

Buy The CUBOT Quest smartphone On Gearbest For $124.9964GB variant
Leave a Reply