If you are a Xiaomi Mi Band follower, you would agree that it’s over a year since the Xiaomi’s Mi Band 2 was launched, and while we anticipated a new sequel to the Mi Band 2, Xiaomi kept on dropping special editions. After the long wait, as per recent leaks that have surfaced through Bluetooth certifications, the Mi band 3 is definitely on its way to becoming a reality.

Earlier today, it was confirmed that the upcoming fitness tracker just got Bluetooth certified. Though this didn’t reveal its key specs, little important info can still be made out.The Mi Band 3 is expected to connect to your smartphone through Bluetooth 4.2, a low power technology, enabling a good battery backup just like his brothers the Mi Band 1, the Mi Band 2 and the HRX version. The Mi Band 3’s model number is listed as XMSH05HM and its production is still handled by Anhui Huami Information Technology Co. Ltd (Huami) which is a subsidiary of Xiaomi. 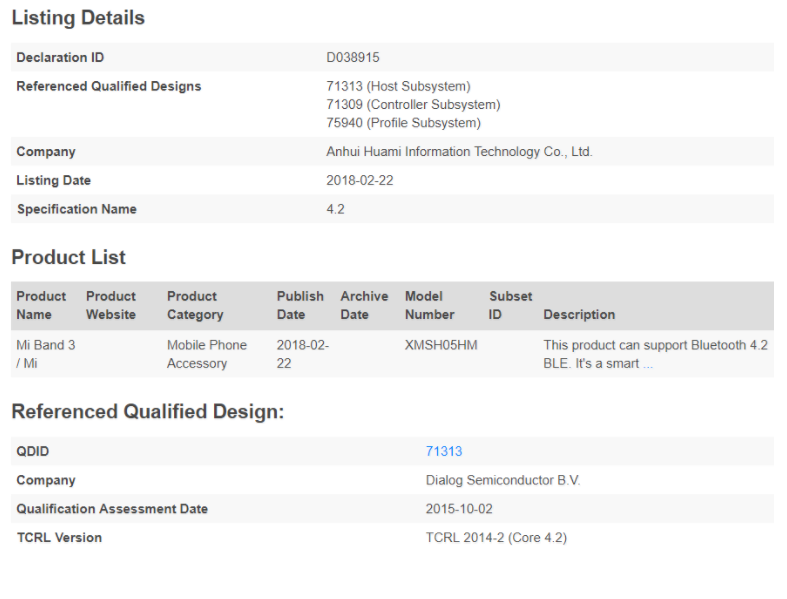 The Xiaomi Mi Band default features such as the heart rate sensor, pedometer, and calorie counter are some features the device is expected to come with as a lot about the design and specifications of the Mi band 3 are still unknown. It is belived that Xiaomi would work on the OLED screen issues on this variant  and  improve upon the heart sensor which worked only when placed really tight to the skin. Can this device manage to beat the success of the other Mi Bands? Stay tuned to find out