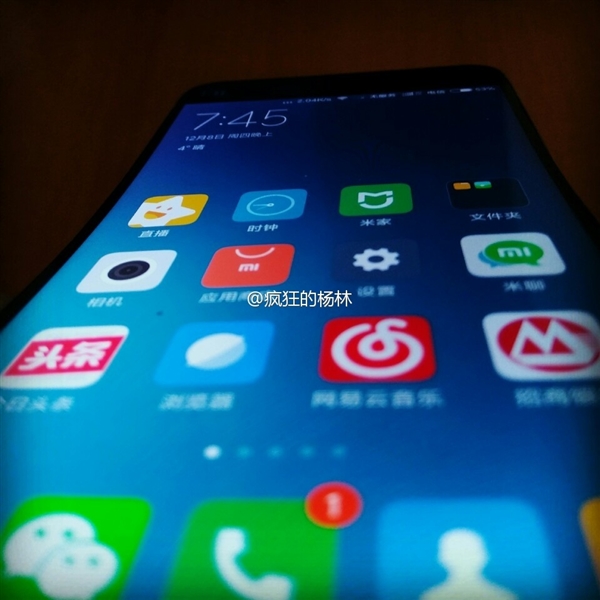 The above image was leaked on the Chinese micro-blogging platform by one of the personnel from Xiaomi, and it’s clear that the device is running on MIUI operating system which hints about an upcoming dual curved screen smartphone from Xiaomi is in works. 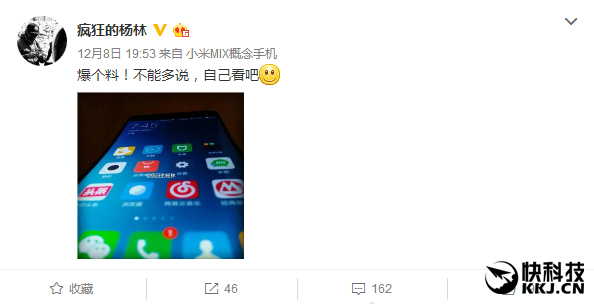 Xiaomi had also recently launched Mi Note 2 that features dual edge curved screen phone, so it totally makes sense and sounds believable that the company is working on another concept dual-edge device.

Talking about the features of the Mi Note 2, it sports a 5.7″ OLED screen with dual edge curve as mentioned earlier. It is powered by Qualcomm MSM8996 Snapdragon 821 quad-core processor coupled with 4 GB RAM and 64 GB internal storage or 6 GB RAM and 128 GB internal storage. Regarding camera on the phone, it sports a 22.5 MP rear camera with other common features like auto-focus, HDR modes, and dual-LED flash support. On the front, the Mi Note 2 features a 8 MP camera which should be decent enough for shooting selfies on the smartphone.

Many of you may ask what’s the point of having a dual edge screen on the front and the rear. During the launch of the G Flex, LG advertised the device like a phone that would be very handy and comfortable to use either with the single hand or double hand. Though it’s worth mentioning that the phone didn’t take off well and the brand had to stop manufacturing the same.

It is to be seen whether Xiaomi succeeds to take off with the sales of this new concept phone if at all it becomes a reality.

Do let us know what you think about this concept of a curved screen on the front and rear of the device.