The Samsung Galaxy S8 is the logical successor to the existing Galaxy S7 flagship, and a Weibo leak has revealed details on the Galaxy S8. It looks like this upcoming flagship device carries some pretty mean looking hardware specifications as you can see in the Weibo leak below. 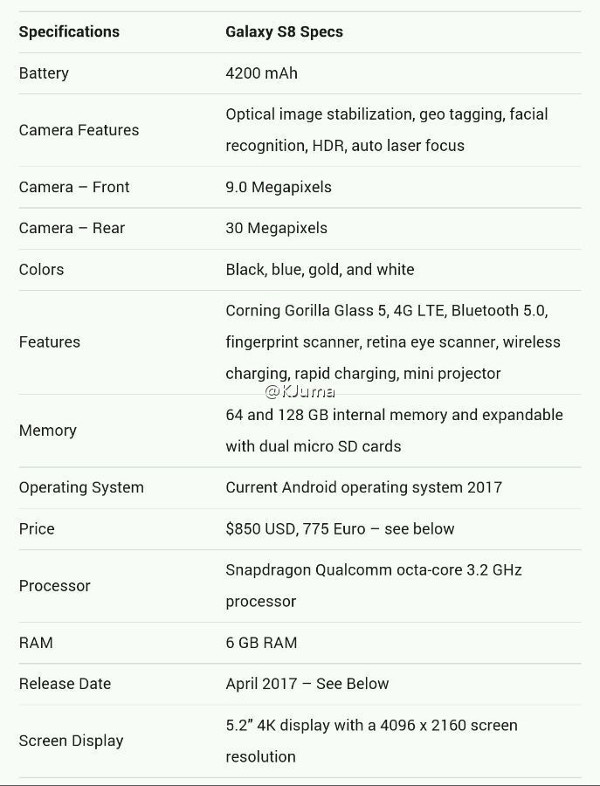 There are a couple of ways to look at rumors of the Galaxy S8 right now. Firstly, it might be a red herring, drawing away the attention of the masses from Samsung’s Galaxy Note 7 worldwide recall due to exploding batteries that has certainly dented consumer confidence in the South Korean brand. The other might be a pre-emptive strike, hoping that an early release of the Samsung Galaxy S8 might help make up for the loss in Galaxy Note 7 sales. Hopefully there will be no hardware issues with subsequent Samsung devices, especially in the flagship segment.

What are some of the crazy hardware specifications touted for the Galaxy S8? We are looking at an outrageous 5.2-inch 4K (4096 x 2160 pixels resolution) display, with a 3.2GHz octa-core Qualcomm Snapdragon processor, 6GB of RAM, a choice of either 64GB or 128GB of internal memory, dual micro SD memory card slots, a 30-megapixel shooter at the back with a 9-megapixel front-facing camera for selfies.

There should be Corning’s Gorilla Glass 5.0 keeping it tough and steady, alongside a fingerprint sensor thrown into the mix. Just in case all of that is not secure enough, an iris scanner is also part of the deal for added peace of mind. Wireless charging with rapid charging capabilities will be the norm with the Galaxy S8. More outrageously, there will be an integrated mini projector — an idea that Samsung toyed with a couple of years ago with the Galaxy Beam 2.

Surely all of these are great on paper, but will the alleged 4,200 mAh battery be able to keep up with all that power-sapping features? There is also no mention of a waterproof or water-resistant capability with the Galaxy S8, which might point to a lack of truth in this leak. Surely cramming all these features into the chassis is going to be a challenge.

With Android 7.0 Nougat being recently unveiled, it should not surprise us at all that the Galaxy S8, if it were to be released next April, will also come with Nougat in tow.

We will take everything that has been written about the Galaxy S8 with a liberal pinch of salt at the moment. It simply sounds too good to be true, and if that is the case with news and rumors online, then it probably is. After all, the estimated April 2017 release date for the Galaxy S8 might be a wee bit too rushed, especially when Samsung needs to tread very carefully from now on in making sure that their new smartphone releases will not suffer from any kind of hardware calamity with unstable, exploding batteries that will result in a massive erosion of confidence in the brand.

Will the rumored $850 asking price for the Galaxy S8 suit your budget, or are you expecting a different price point? Surely when there is a Galaxy S8 in the pipeline, a Galaxy S8 edge should be right behind it.