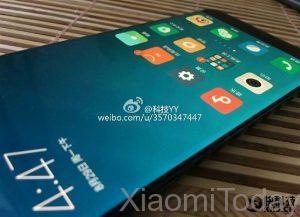 Xiaomi Mi Note 2: A New Flagship To Be Reckoned With?

Just what kind of hardware can we look forward to where the Xiaomi Mi Note 2 is concerned? For starters, there is a 5.7” display at 2K resolution which is truly something else. This double curved display will certainly place it on a pedestal — the Samsung Galaxy S7 edge, anyone?

Expect Qualcomm’s Snapdragon 820 processor to get the job done, where there should be a couple of variants that is in line with Xiaomi’s modus operandi. We can expect a Xiaomi Mi Note 2 that will sport 4GB of RAM, while another model will carry 6GB of RAM. Not only that, internal storage should max out at 128GB, while a microSD memory card slot is there to further augment its storage capability.

Shutterbugs should not find the Xiaomi Mi Note 2 wanting at all, as it comes with a 13MP camera in front for super detailed selfies, while at the back lies another similar 13MP camera. Security is enhanced with the presence of a fingerprint sensor for you to unlock and presumably to access certain apps in your device. As for its working endurance, the 3,500 mAh capacity battery might not do it justice due to the screen size, so it would be prudent to ensure you have a power bank to go along with it.

With a rumored starting price of 2,999 yuan (US$450) depending on the hardware configuration that you decide upon, the Xiaomi Mi Note 2 is certainly not going to be cheap. It has been positioned to chip away at the flagship devices of other makes such as the Galaxy S7 and S7 edge, and who knows, also to steal some thunder away from the upcoming iPhone 7 (or whatever that it is going to be called then).