The Chinese multinational telecom and consumer giant, Huawei has mostly had a rear-mounted fingerprint in most of its models. But things could potentially change perhaps from next year. Insiders @Mocha Social workers claims that Huawei is looking to bring in the front fingerprint design. Huawei has long been known for experimenting innovative designs and features . Although Huawei has been able to pull the volumes with help of Honor brand, P-series continues to be its premium flagship line as far as smartphones are concerned.And if that is the case,  Huawei P10 could potentially be Huawei’s first mobile with front fingerprint design.
The question now would be about the shape and size of the fingerprint identification key that Huawei is planning to bring about. There are many reports stating it could be embedded in home button of the cellphone.Could we see a big difference in Huawei P10, the successor to P9. 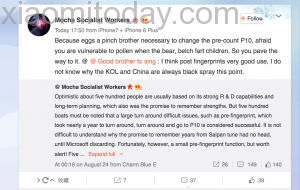