With Xiaomi releasing their new handsets tomorrow, Meizu Technology has decided to join the party and is set to release their new U10 and U20 smartphones on 28 August.

The U20 has a 1080P 5.5 inch screen which covers the entire face of the phone and provides an excellent visual experience. Its eight-core processor will facilitate having multiple applications running in the background without slowing down the user experience. Memory options are 2GB or 3GB of memory and 16GB or 32GB high-speed flash memory. The battery size will be 3260mAh. Data processing should be quick and smooth under any configuration.

The U10 has a smaller IPS 5.0 inch screen, and also houses an eight core processor and the same storage options: 2GB or 3GB of memory, 16GB or 32GB of flash memory. However, the smaller model uses a 2760 mAh battery to reflect its lower power consumption.

The U10 and U20 screens will use double-sided 2.5D curved glass and will be available in four colors to suit most tastes: moonlight white, sky black, champagne gold and rose gold. Both models will have a 13 million pixel front camera and a 5 million pixel rear camera, and will be coupled with intelligent processing for beautifying face shots and light exposure maximization to take photos that on par with users’ needs. The new models will also include mTouch 2.1 technology which allows quick fingerprint access to Alipay, stores using Flyme fingerprint payment as well as Flyme fingerprint encryption technology.

Both models are well equipped for fast wireless internet access and support major 4G networks from China Mobile, China Unicom and China Telecom. There will be two sim slots, and the primary sim card will access the high-speed 4G network, whilst the secondary card will allow calls on the 2G network. 5G Wi-Fi networks will also be supported.

In terms of operating system, the U10 and U20 run Flyme powered by YunOS system. The strong security features of YunOS will prevent third-party monitoring, eliminating any privacy risks during payment transactions. The data on the handsets can be recovered from a cloud backup, thereby quickly restoring data and other key applications and functions. 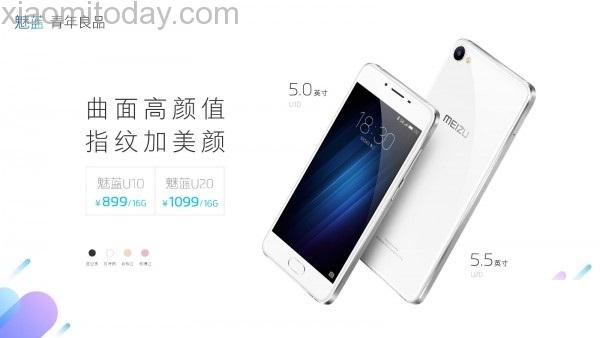