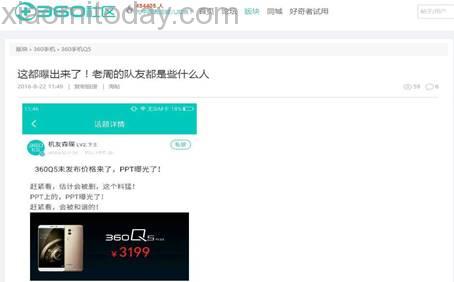 On August 23rd, will launch their 360 Q5 and Q5 Plus smartphone. However, due to leaks by the staff, a lot of information has been leaked. We see the price for both these smartphones starting at a premium 3199RMB ($480USD) price, which is quite high for a Chinese smartphone. However, the specs do match up to the price, with both phones utilizing a Snapdragon 820 processor, 4GB of RAM, and 128GB of storage. Both phones will also feature fast charging as well as three 13MP cameras, and a safety chip that is supposedly very secure and has passed the highest standards of certifications. The Q5 will use a 5.5” full HD AMOLED display while the Q5 Plus will sport a 6” full HD AMOLED Display. See the full specs down below:

It will have dual cameras, similar to what the Xiaomi Redmi Pro currently has, and should provide some pretty fine bokeh in images, we are looking forward to seeing how the camera does. In addition, it only has 4GB of RAM compared to the Oneplus 3’s 6GB, however 4GB of RAM is plenty for a smartphone, even 3GB is enough for most people. 128GB of storage should appeal to many who install huge games or high quality music, and it should be much more difficult filling up 128GB of storage than it will 16GB. Currently, the phone is not officially released and there has been no word from 360 officially, so we are guessing that this was not an intended leak. Stay tuned for more information on the new 360 Q5, with what looks to be a direct competitor to the Oneplus 3!