As we edge closer to the mi6’s release, expected in July 2016, rumors about it are surfacing all over the internet. We have seen leaked specification and an array of “leaked” photos purporting to show the phone’s design. In this article we will share with you, the latest leaks and rumors based on reliable sources, regarding Xiaomi Mi6.

Screen
As compared to previous generations, Xiaomi Mi6 is rumored to have a larger screen. Based on the current market trends we reckon that it will be a 5.2-inch panel with an amazing resolution of 4096 x 2160. If the latest rumors are true, Xiaomi Mi6 may have a screen with a PPI nearing 700. 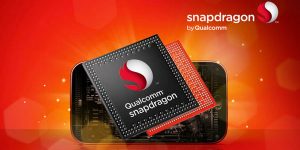 A Qualcomm snapdragon 820 will power the Xiaomi Mi6. This beast of a processor is built on 10nm manufacturing process. Apart from that, the Snapdragon 823 is expected to come with 64 Bit, Kryo processor clocked at 2.2Ghz (Quad core), which marks a 20% increase over its predecessor’s CPU. The Adreno GPU alongside the SD 823 will be clocked at 720Mhz and we might see a same design for the former as well. 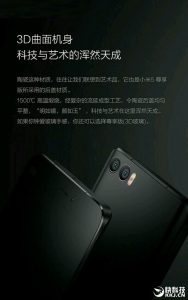 If you’re looking for phone with a good camera, then the Xiaomi Mi6 will not disappoint you. Both the front facing and rear facing cameras will surely be getting an upgrade. Leaks suggest a dual lensed rear facing camera with a 1/1.7in sensor and a f/1.4 aperture, with a resolution of between 18 and 24 megapixels, most probably manufactured by Sony, accompanied by a 7 MP secondary shooter.

It is believed that a face-lit is proposed in the new design. The phone’s exterior is going to have a metal unibody design. Rumors are that Xiaomi will be looking for a more of a premium finish. Xiaomi may be adding a touch of glass to the rear of the phone. 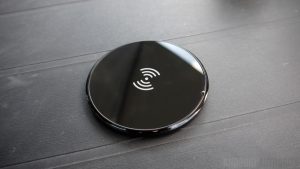 There are also leaks that confirm integrated wireless charging, and improved rapid charging feature. As the consumers are becoming more dependent on mobile technology, making the smart phone’s battery more efficient and quicker to charge is the need of the future.
So you can charge your Xiaomi Mi6 by just palcing it in the charging pad. Competitors charging pad will be compatible, and will charge up the phone to 30% in just 20 minutes. The improved quick charging feature will give you half the charge in as little as 30 minutes, provide that you use the supplied rapid charger.

Memory
According to rumors, the new beast is going to come with a number of memory options. A Micro SD card slot will also be available for expending the storage. This will give consumers up to an extra 128 GB. The three internal memory options of 32, 64, and 128 GB will be inherited by Xiaomi Mi6. 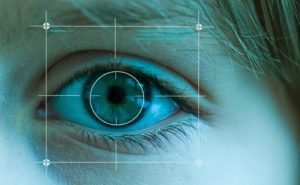 Price
The good people at Xiaomi are rumored to launch this phone for a price tag of $399, which will translate to only 2012 Yuan. The first day price in other countries including UK, Germany, South Korea and India are all rumored to be the same.

There are Never Enough Features
Gorilla Glass 4, new sensors and apps related to health will make their way to the Xiaomi’s next big thing. Returning will be waterproofing and all of the typical sensors including barometer, compass, gyro etc. 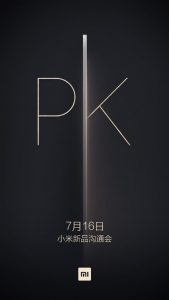 As with the previous Xiaomi releases, the projected July 2016 release date is expected to hold true. This release should be followed by the India, Japan and Korea release. If rumors hold true, preorders will begin 2 weeks before release.

Conclusion
Each year Xiaomi launches a new phone which is folds better than the previous model, and the rumored Xiaomi Mi6 will surely not break this trend. With these rumored improvements that will meet the needs types users alike, the release of Xiaomi Mi6 is expected to live up to the hype. If you want to make some thumbnails like we do, then visit Photo Collage Maker App for doing the exact? 😀

To upgrade your phone to MIUI 8 please read this post.