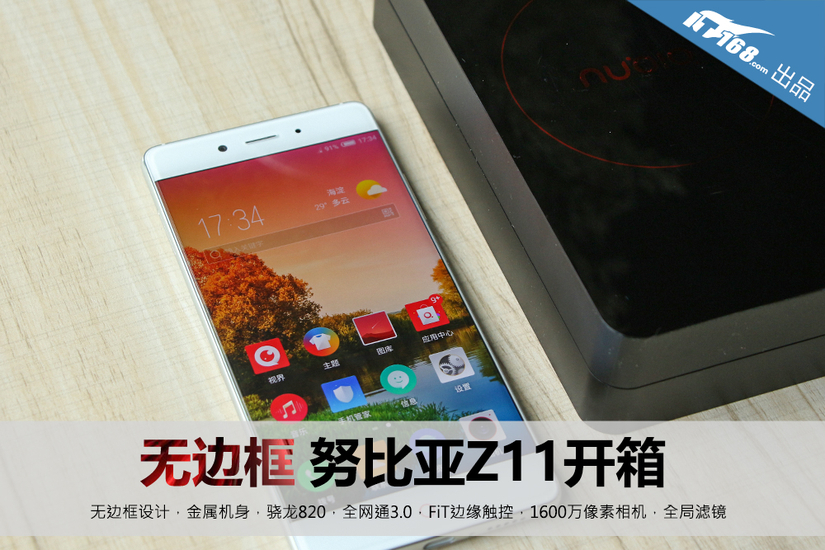 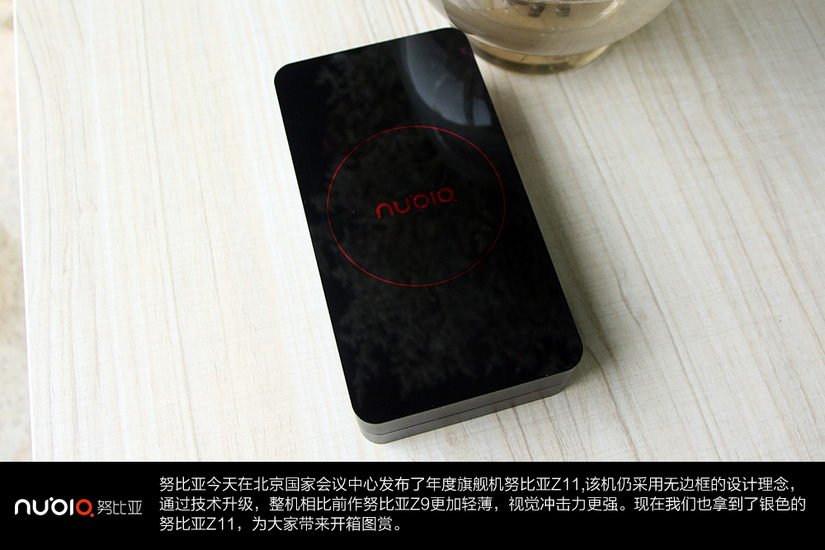 Nubia released its annual flagship Nubia Z11 at the Beijing National Convention Center, the phone still use borderless design, through technological upgrading, the whole compared to before Nubia Z9 slimmer, stronger visual impact. Now we have got the Silver Nubian Z11, as we bring the unboxing diagram tour. 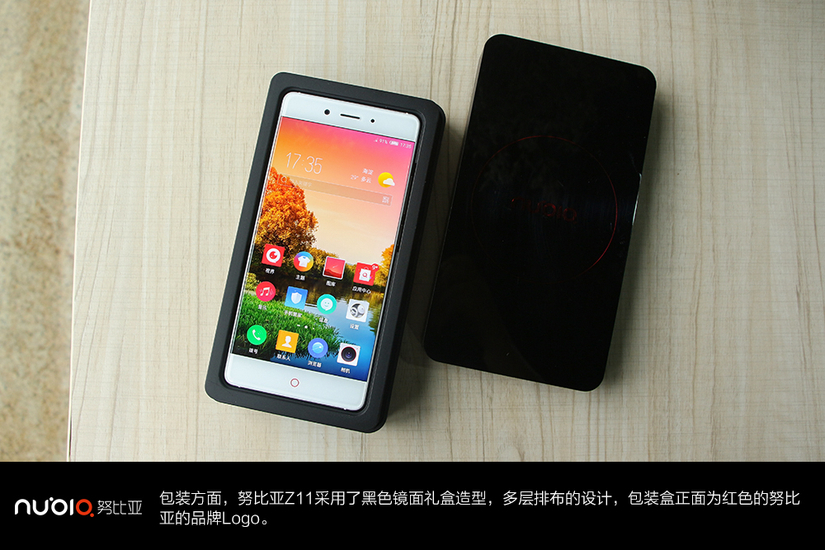 In the part of packaging, Nubian Z11 take a black glossy gift box shape, the design of multi-layer arrangement, front of the box has the red Nubia brand Logo. 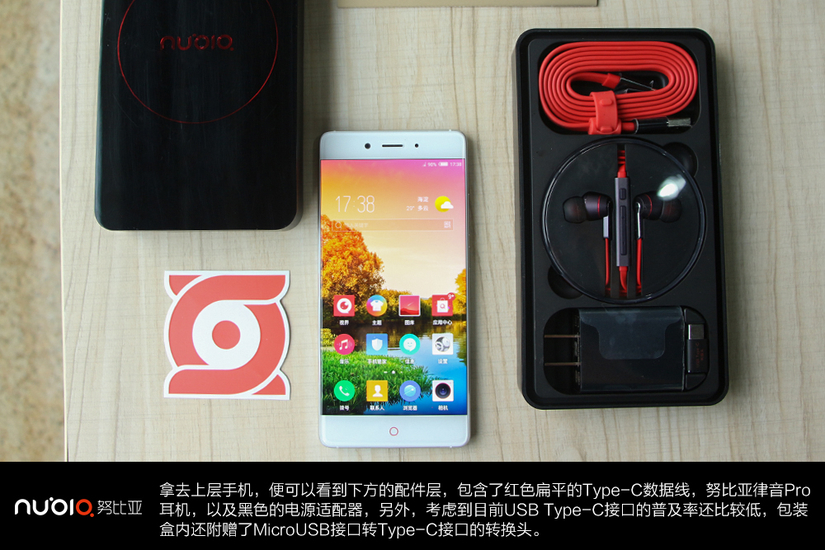 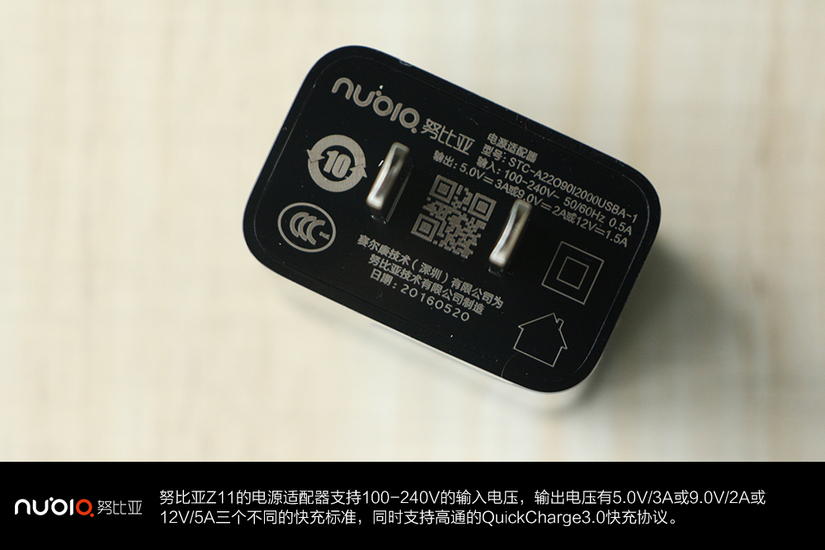 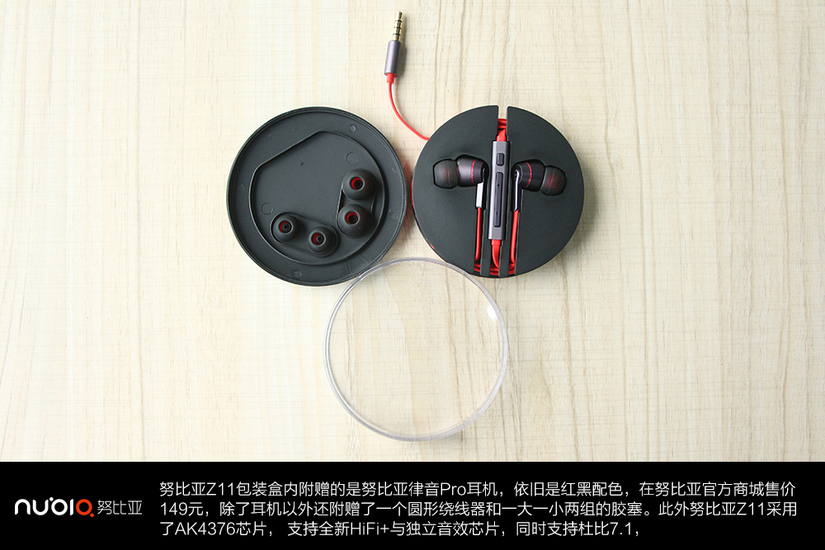 Nubia Z11 comes with the box is a Nubia rhythm tone Pro headphones, still red and black color, in a Nubia store official price of 149 yuan, in addition to the headset also comes with a round winder and one large and two small rubber plug. In addition Nubia Z11 uses the AK4376 chip, supports the new HiFi + with independent audio chip, and support Dolby 7.1. 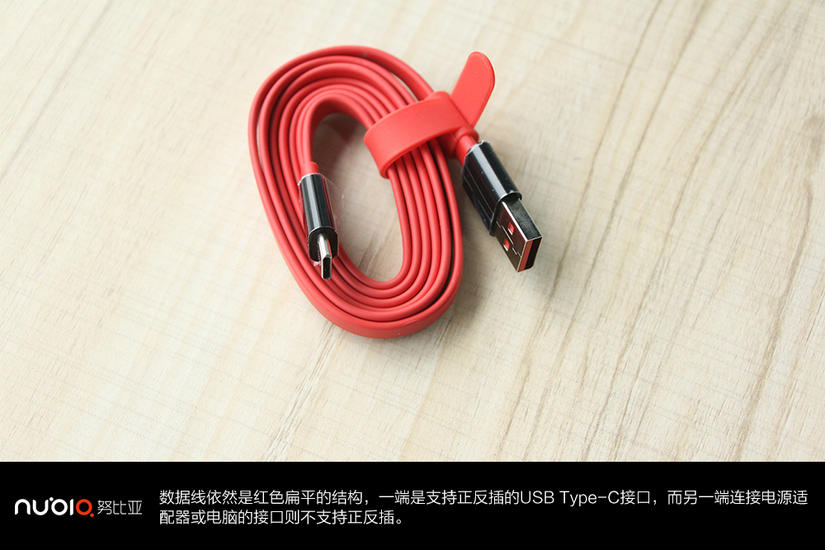 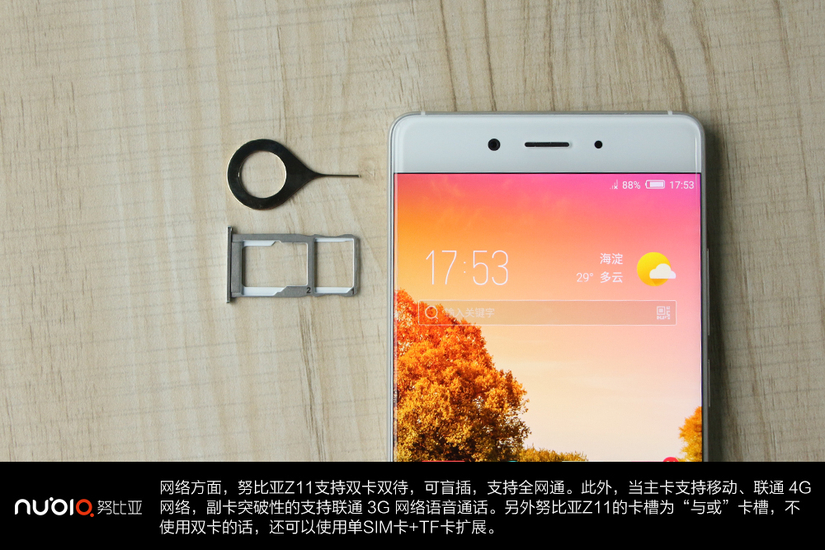 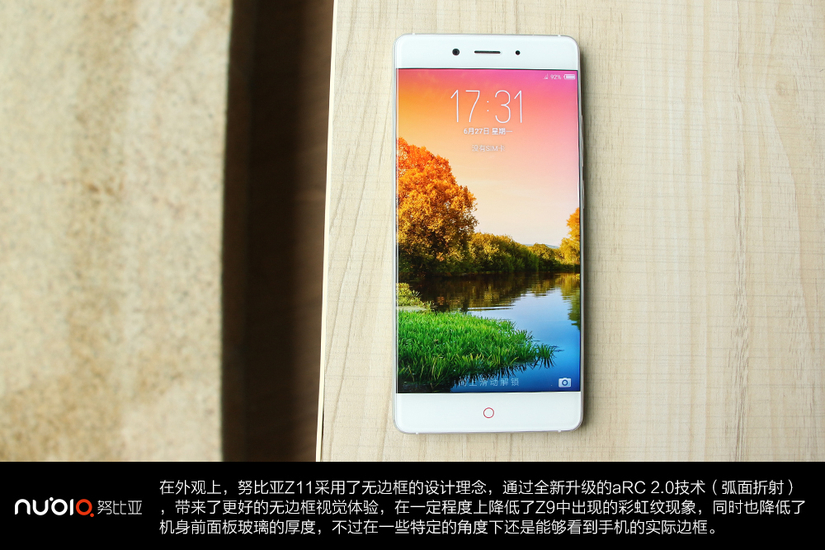 In appearance, the Nubia Z11 uses a borderless design concept, through new upgrade aRC 2.0 technology (arc refraction), brings a better visual experience without borders, to a certain extent, reduce the Z9 appearing rainbow pattern phenomenon, but also reduces the thickness of the body in front of the plate glass, but at certain angles can still see the actual frame of the phone. 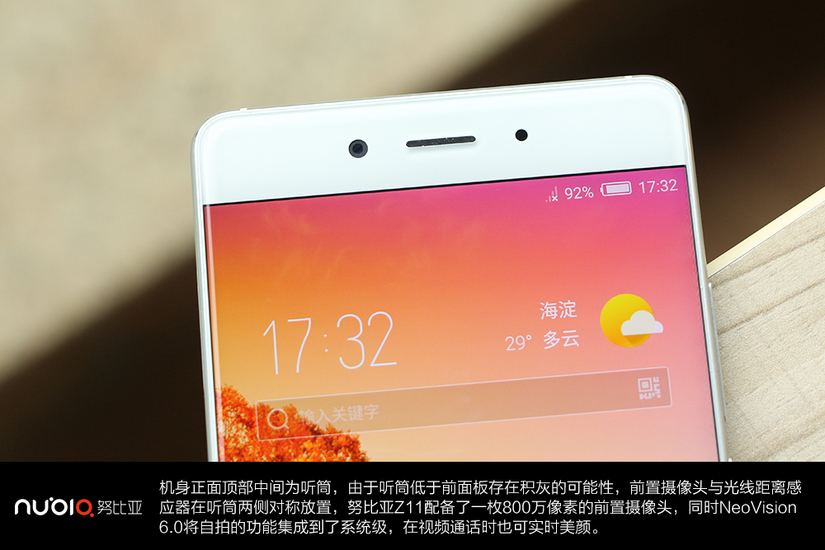 Body top middle is the handset, due to the presence of the handset is lower than the front panel possibility of fouling, front camera and light proximity sensor placed symmetrically on both sides of the handset, Nubia Z11 is equipped with a 800-megapixel front camera, and the self-NeoVision 6.0 features integrated into the system level, in the video call can also be real-time beauty. 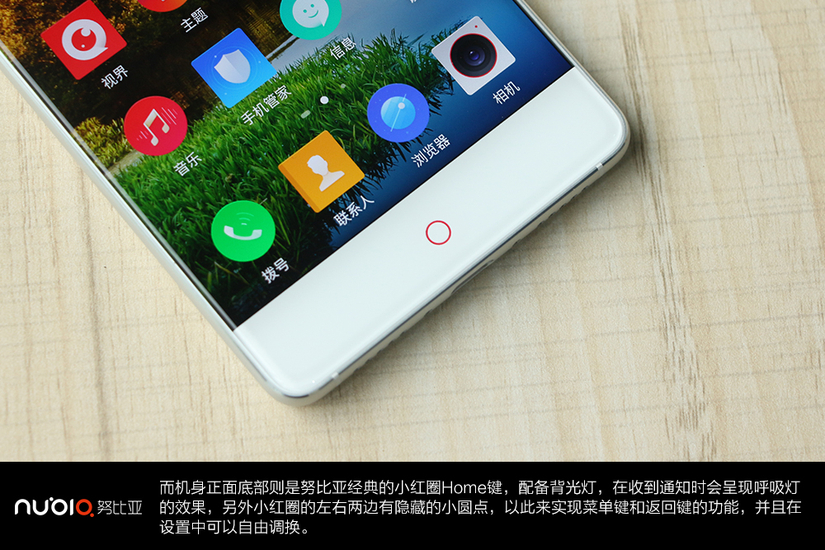 The bottom of thebody front is the classic red circle Nubia Home key, with backlight, upon receipt of the notification will show the effect of breathing light, in addition to left and right sides of the red ring hidden dots, as to achieve the menu key and back key functions and settings can be freely exchanged. 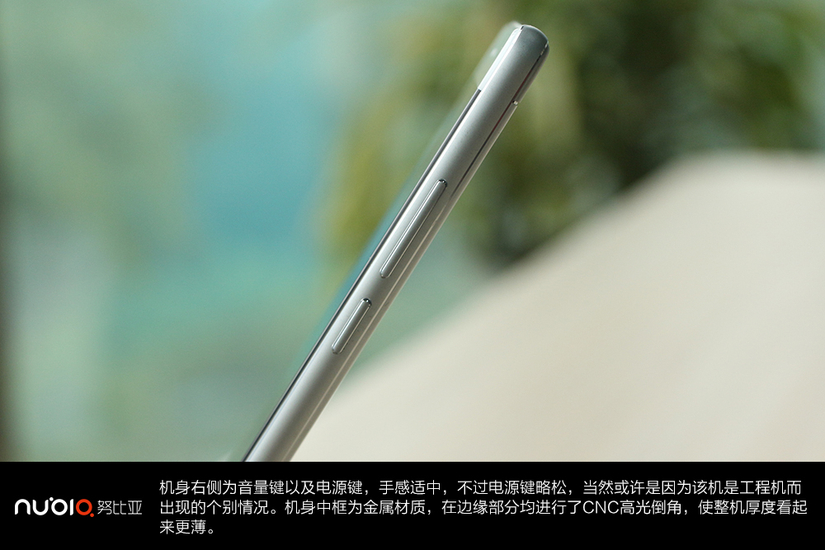 The right side of the body is the volume keys and power button, feel moderate, but power button slightly loose, of course, perhaps because this machine is individual circumstances and the emergence of machine engineering. The body frame is made of metal, the edge portions are made CNC high light chamfering, the whole body thickness looks thinner. 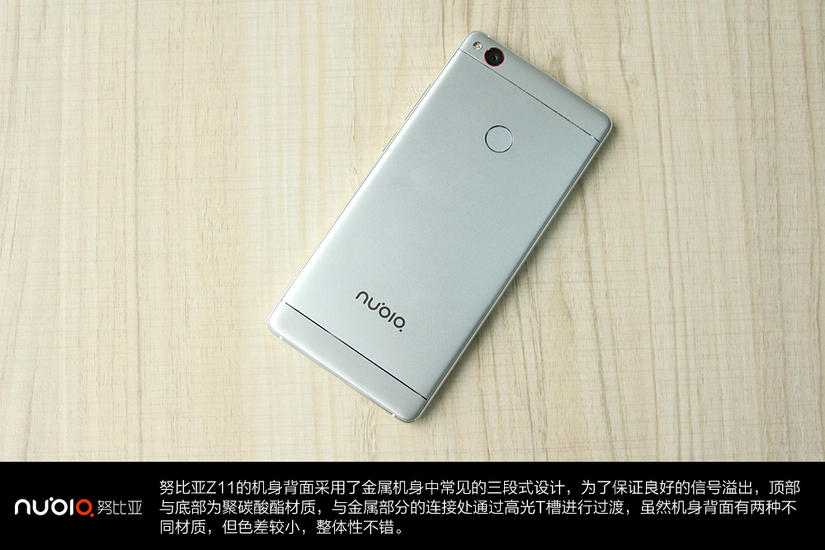 Nubia Z11 back body take a metal body in a common three-stage design, in order to ensure good signal overflow, the top and bottom made of a polycarbonate material, the connection of the metal parts processed by high light T-slot transition, although the back of the body there has are two different materials, but the color is small, overall good. 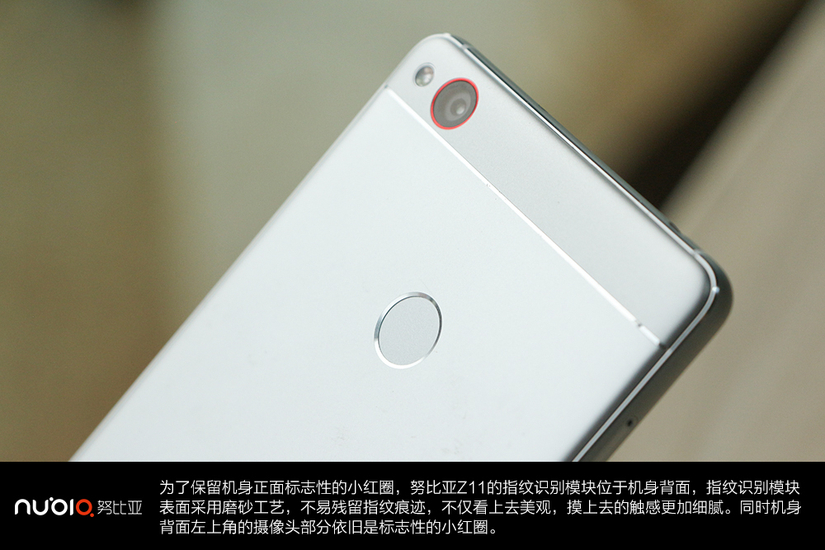 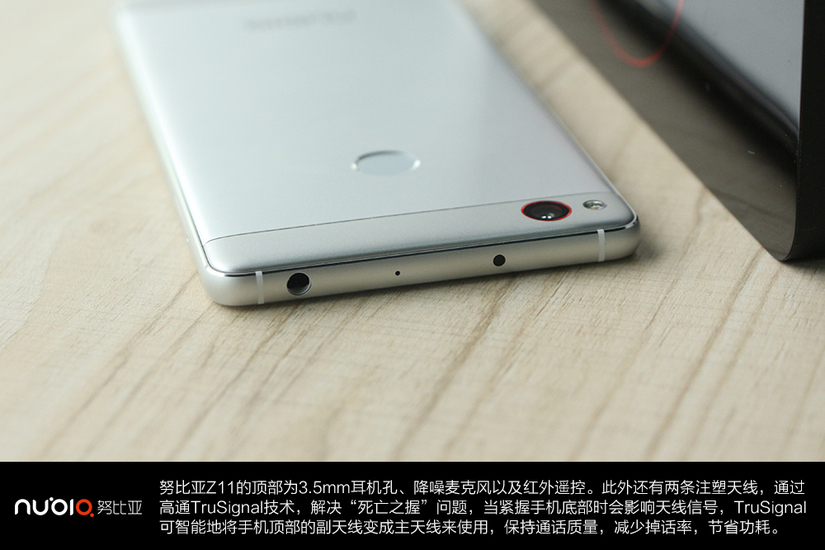 Top Nubia Z11 is a 3.5mm headphone jack, noise-canceling microphone and an infrared remote control. There are also two injection antennas, high-pass TruSignal technology, to solve the “death grip” problem, when the bottom of the phone will immediately affect the antenna signal, TruSignal can intelligently use secondary antenna at the top of the phone into the main antenna, keep calling quality and reduce dropped call rate to save power. 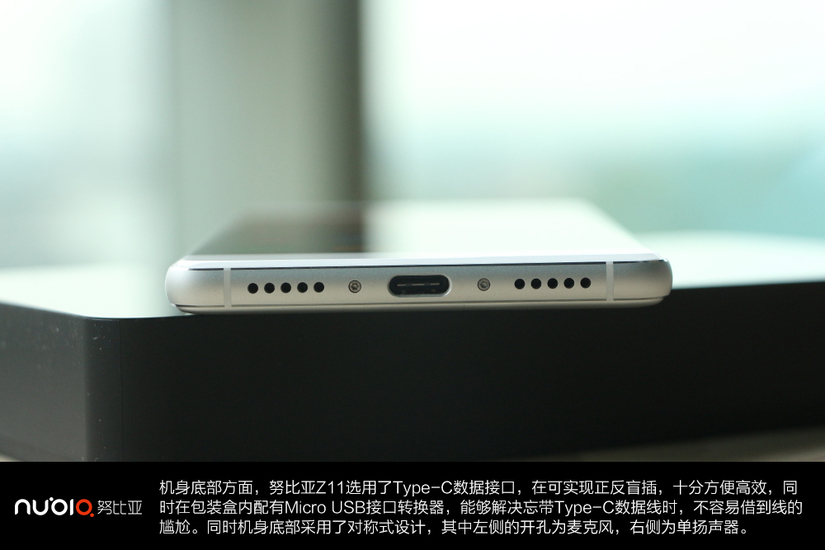 Aspects bottom of the body, Nubia Z11 selected Type-C data interface, can achieve positive and negative blind plug, very convenient and efficient, and in the box there MIcro USB interface converters can solve forgot Type-C cable when the line is not easy to borrow embarrassment. At the same time the bottom of the body take a symmetrical design, in which the microphone opening on the left side, the right side is a single speaker. 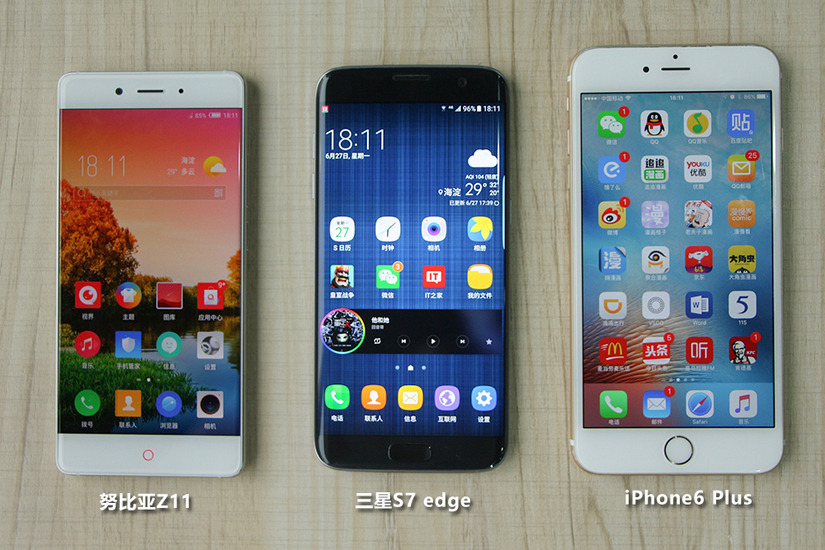 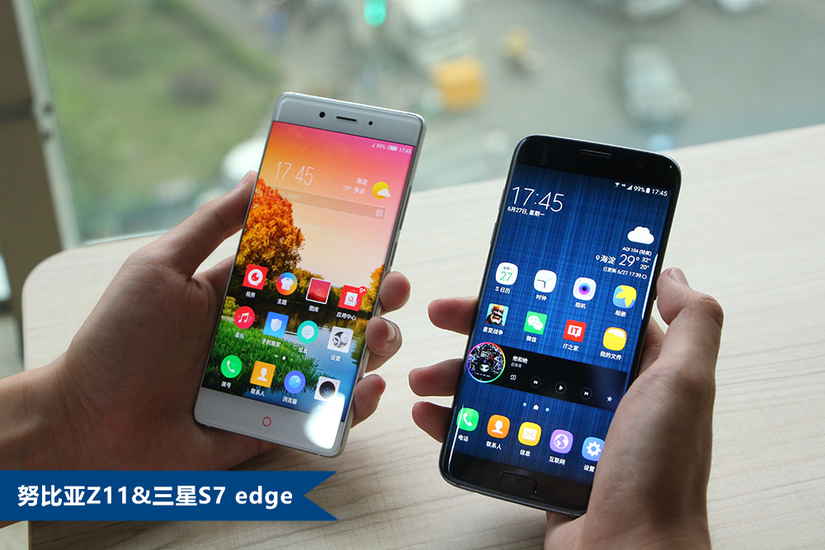 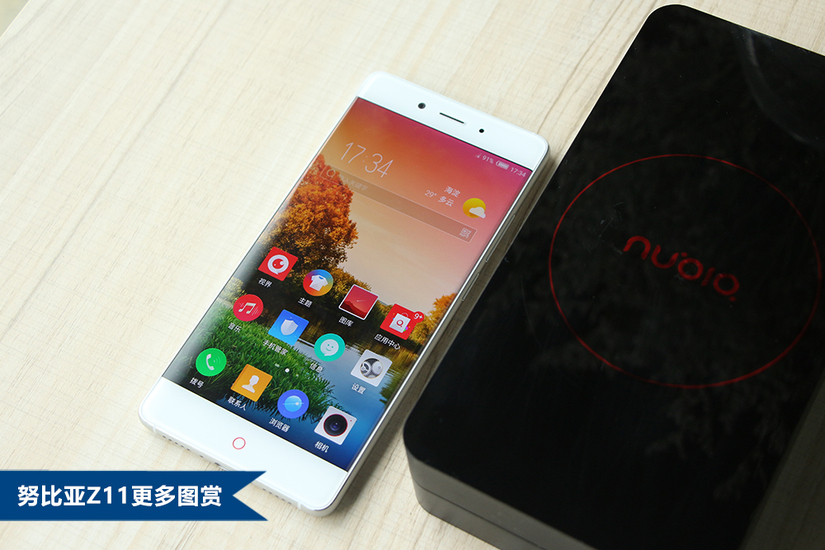 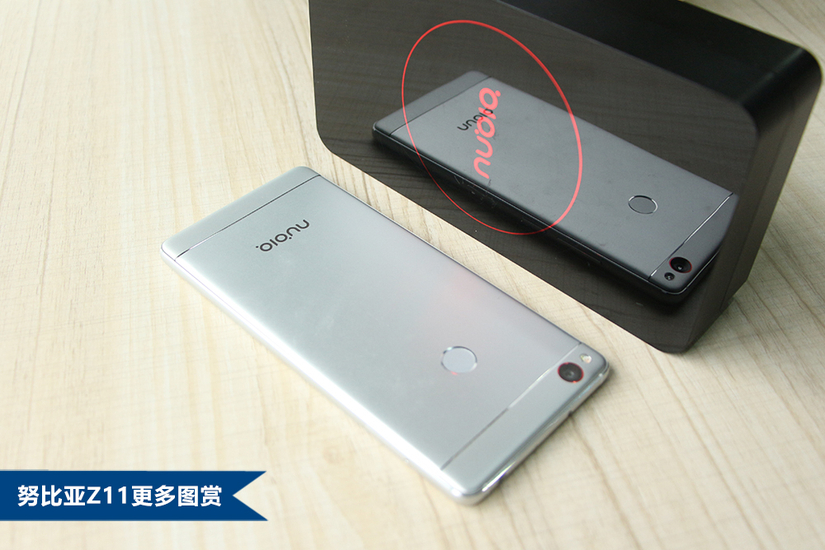 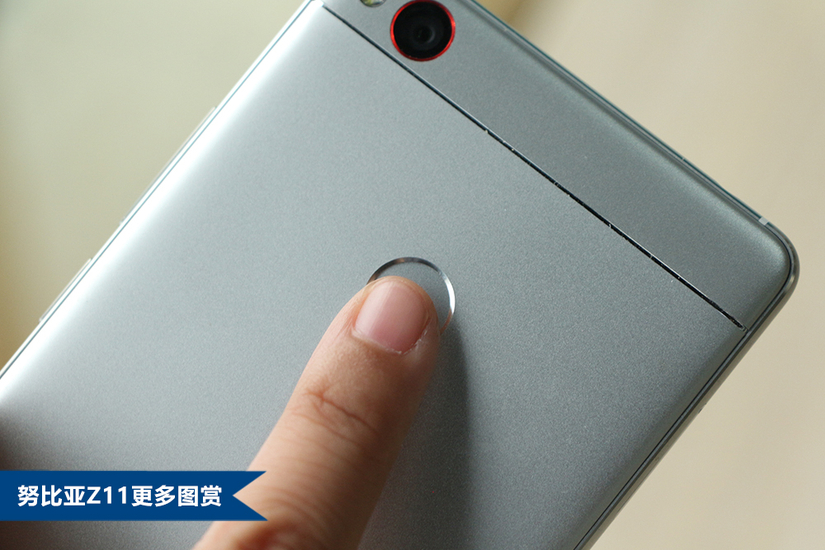 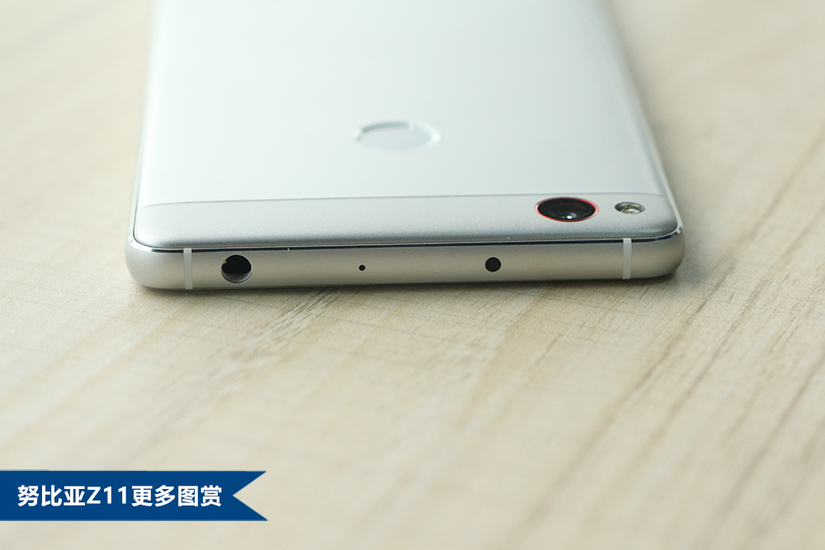 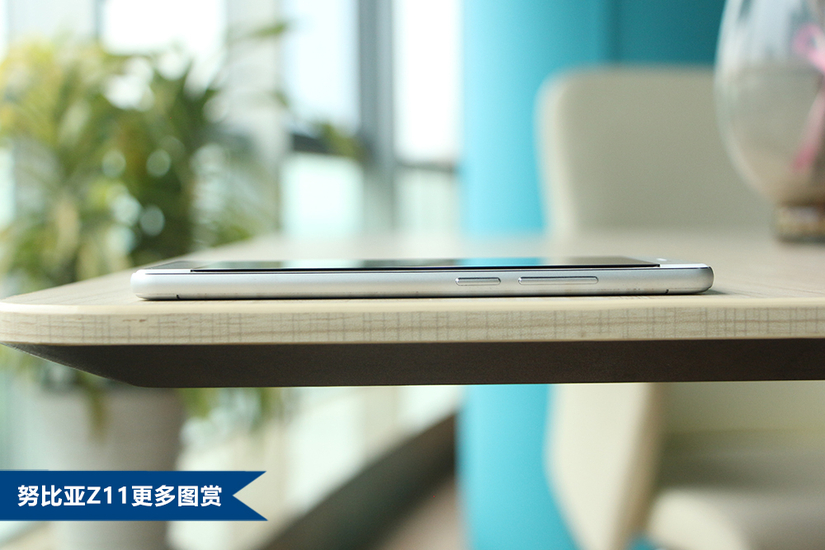 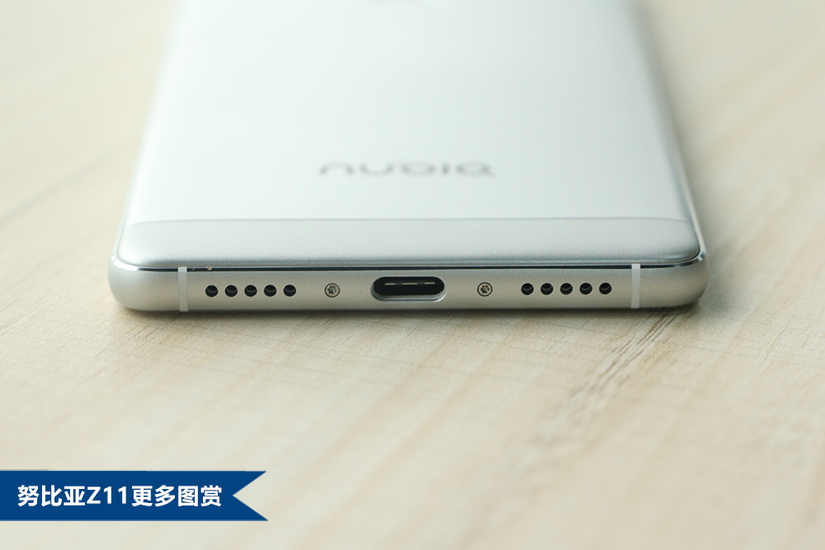 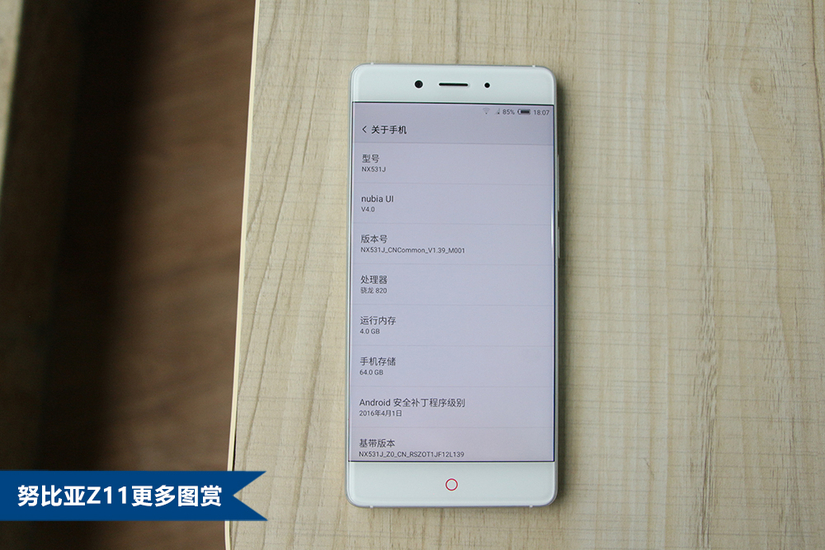 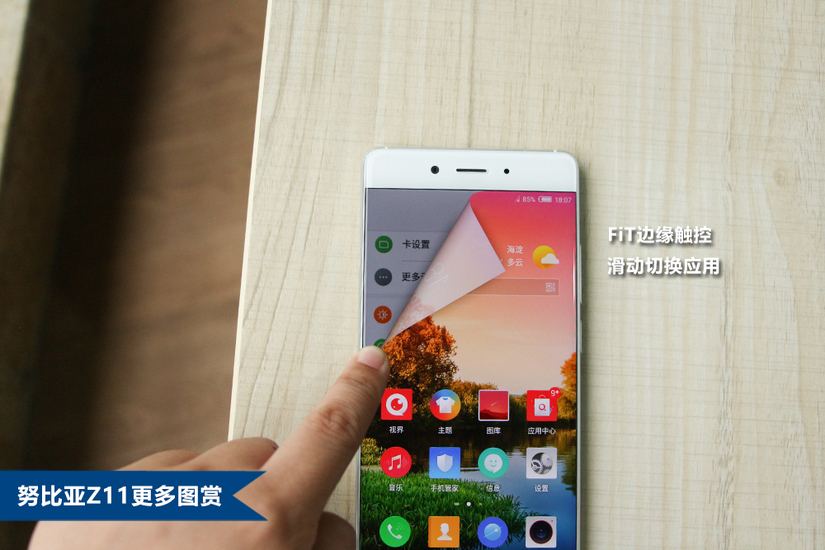 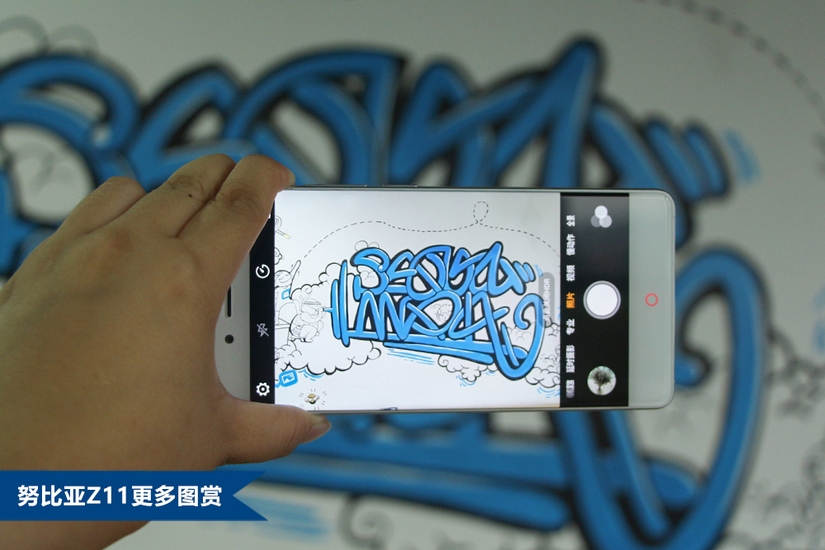