HI everyone. We got 7 popular mid rang smartphones on the market. And we’re going to compare them in terms of Software, Design, hardware, battery, and charging. Umi Touch and Oukitel k6000 pro run the marshmallow, and others are running Lollipop. 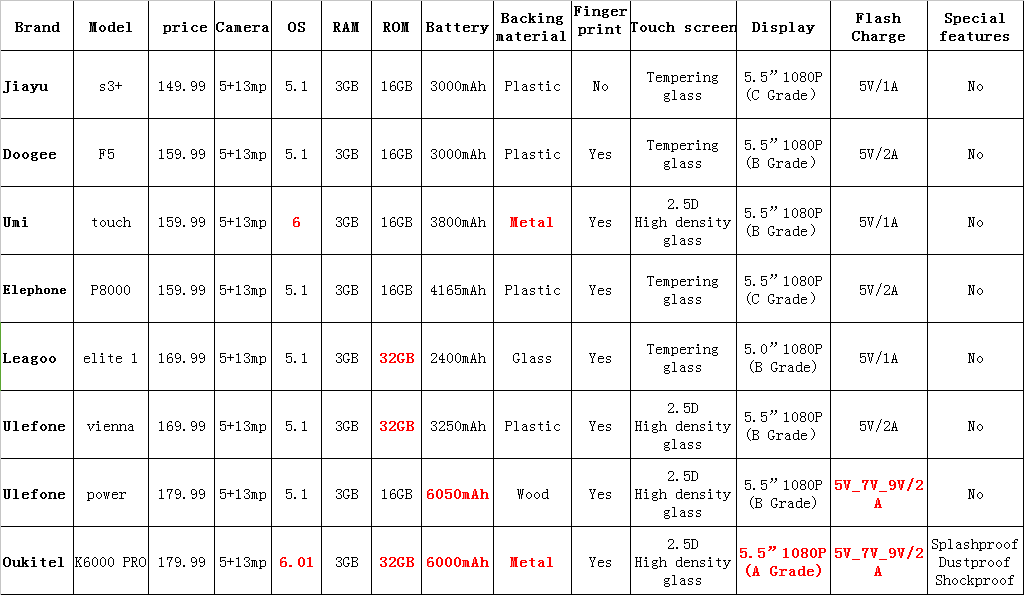 7 smartphones are Jiayu S3+, Doogee F5, Ulefone power, Oukitel K6000 Pro, Leagoo Elite 1, Umi touch and Elephone P8000. Let’s talk about the back cover design first , which effects the overall build quality, hand feeling and using experience. We’ll start from the left, then we’ll go though to the right. The reason I put these phones in such order is because of the different backing materials.

Jiayu S3+ was launched by the end of last year. And it’s still a considerable device due to its competitive price. It uses plastic back cover and has light weight. But it feels quite slippery.  On top of it, we found the 13MP camera with a dual-tone flash light. Elephone P8000 was a hot seller since the launch in July last year. The one I got is the golden color version. They added some texture on the plastic back cover. A fingerprint reader is found under the 13MP camera.  And we only found one LED flash. Elephone Logo is at the bottom. The third one is the F5 from Doogee. It’s also released in last year and it’s the 2015 Flagship from the company. The first thing we notice is the size of the fingerprint reader, it’s obviously larger than the one of P8000. Which could result in better recognition ratio theoretically. And it packs dual-tone flash and 13Mp camera. The speaker is located at the bottom unlike Elephone. Let’s move to the next group. Oukitel K6000 Pro is the upgraded version of K6000. The marshmallow powered phone is currently on pre-sale. It has fingerprint reader under the 13MP camera, dual-tone flash and aluminum alloy back cover. The speaker is at the bottom. The phone feels heavier because of the 6000mAh battery inside. The phone is very comfortable to hold. The Umi touch is released last month. It ships with Android 6.0 Marshmallow. The phone uses aluminum alloy back cover, dual-tone flash. Ulefone power shares very similar specifications with K6000 Pro, it phone is also powered by a 6000mAh battery with fast charging technology. So it feels heavier just like K6000 pro. It also has a Fingerprint reader on the back. 13MP camera goes with a dual-tone flash. The phone has Oak backcover if you’re a fan of this. Leagoo Elite 1 has double side glass. It’s smaller than others, since it uses 5 inches display. The glass backing looks good, but it gets messy and dirty after a while, because of the fingerprint stains and scratches. 13MP camera and dual-tone flash on the top, speakers are located at the bottom.

All the smartphoness pack 5MP front cameras. But the difference is that Umi touch comes with a single flash, which could be helpful for taking selfies under dim light. And we can see that the Umi touch and Leagoo Elite 1 have the fingerprint readers at the front. It’s also a physical button but everytime I press the button, it has the annoying clicks. I’m not sure if all the Umi touch have the same problem. Next let’s take a look at the display, we adjusted the brightness to the maximum to make a fair comparison. S3+, P8000 and Touch have warmer color temperature, Elite 1 and power on the other hand have more blueness on the display. Oukitel K6000 Pro has the best balance of color temperature and brightness.

Then let’s take a closer look at the frames of these 7 smartphones. Jiayu S3 has plastic frame. At the bottom, there is a micro USB port . Headphone jack is on the top. Doogee F5 has metal on the corners and a little bit Beneath display. Power button, volume rocker and SIM card slot is on the right side. Micro USB port and speakers are at the bottom. Headphone jack is on the top. I don’t like the corners because it’s not comfortable to hold. Next we’re going to take a look at Elephone P8000. The phone is surrounded by aluminum alloy frame, its CNC chamfered edges feels comfortable and round corners are plus. Microphone and micro USB port are at the bottom.  Power and volume rocker are at the right side. SIM card and TF card slots are inside the back cover. Let peel that up and see. These two are for the SIM cards, the small one is for external storage. Umi touch’s design looks like Meizu MX5. The power button and volume rocker are also suffer from the annoying click sound. But the curved back cover is very nice, so is the grip feeling. They made an excellent copy of Meizu. Micro USB port here, SIM card slot and external storage slot are on the left side. Next one is Oukitel K6000 Pro, the aluminum alloy frame is precisely cut along the corners. Similar craftsmanship can be seen on Ulephone power. The buttons are easy to reach with your thumb. Headphone jack, micro usb port, SIM card slot is on the left. Ulefone power has some special designs on the frame. It packs a physical camera button in the middle. It comes handy when you take a vertical picuture, but it’s kinda hard to reach when you take a horizontal picture. On the top, there is an IR blaster for remote control. The Leagoo Elite 1 has speakers at the bottom, micro USB port here, micro phone next to it. Headphone jack on the top. The volume rocker are on the right side, and the build quality is much better than Umi touch. There is no click sound when you press the buttons. It also has a physical camera button and it’s located near the bottom where it can be easily accessed when taking a horizontal picture.

In this part of the video, we’re gonna drop some water on the screen. You’ll see the differences between the screen materials reacting to the water. Customers usually won’t notice such details but it does make difference on the using experience. Water repellent screens are harder to get the fingerprints on and they are easy to clean up. Hydrophily screens are very easy to get messy. The result is clear and obvious, screens of Doogee F5, Elephone P8000, Umi Touch are hydrophily, you can see the water is wide spread on the screen. This is called anti-fingerprint coating, however, since it’s very hard to tell if the phone has it or not, some manufacturers saved cost on that.

The chargers are the most essential accessory in the package. You can tell the smartphone charging speed by studying the specifications on the charger. So we take them out and put them in a specific order. Three phones on the left have maximum input of 5V 1A, which works out of 5 watt power. That is so out dated, we remember such charging speed was commonly used on phone 5 years ago. You probably should be aware of this, because by half an hour charging time, you won’t get much power. Elephone P8000 and Doogee F5 have maximum input of 5V2A, which makes them 10 watt. They are regular standard nowadays, but they’re not fast charging. Oukitel K6000 Pro and Ulefone Power have the most advanced MTK quick charge technology called Pump Express Plus. The intelligent chips inside the charger and phone could automatically adjust the charging speed according to the current battery level in order to have the maximum input power. We’ll get into that later in this video.

The next big things are the memory and storage. All the smartphones here sports 3GB of RAM, which is enough for muti-tasks and big games. However, their internal storage are different. That determines how many pictures, videos, movies, musics and books you could save in your smartphone. So we factory reset all the smartphones to clean up all the apps and cache data first, then we’ll use the most efficient test to show you their capabilities.  Ulefone power has 11.69GB available, Leagoo Elite 1 has 25.01GB available, Elephone P8000 has 10.58GB available, Oukitel K6000 pro has 25.72GB available, Umi Touch has 11.18GB available, Doogee F5 has 10.59GB available, Jiayu S3+ has 11.53GB available. Ulefone power could shoot videos about 3 hours, Leagoo Elite 1 could record videos of 6 and half hours.  Elephone could save videos of 1 and half hours. Oukitel k6000 pro increased the time to 6 hours and 40 mins, Umi touch is slightly under 3 hours. Doogee F5 is slightly less than Umi touch, and Jiayu S3+ just over the 3 hours line.

Since all the phones pack MT6753 chipset, they score very similar on Antutu, except that Jiayu S3+ and Ulefone power is slightly below the 37K mark. Then we could look deeper beneath the surface by studying the device info. In here, you can see the sensors that each phone has.

Now, let’s do the charging speed test. We use the wattmeter to measure the input power of each smartphone. It tells the voltage and ampere. As you can see from the chart, Umi Touch, Jiayu S3+, Elephone P8000 and Leagoo Elite 1 only have 5 watt input power. Then let take a look at the next three phones, Doogee F5 works out of 2.5 watt input, which makes me speechless, Ulefone Power and Oukitel K6000 Pro have about 16 watt. Even though both phones have 6000mAh battery, it probably takes less time to fully charge them than others.

Get Jiayu s3+ from Gearbest.com

Get Jiayu s3+ from Everbuying.net

Get Jiayu s3+ from Banggood.com

Get Doogee F5 from Gearbest.com

Get Doogee F5 from Everbuying.net

Get Doogee F5 from Banggood.com

Get Ulefone Power from Gearbest.com

Get Ulefone Power from Everbuying.net

Get Ulefone Power from Banggood.com

Get Oukitel K6000 Pro from Gearbest.com

Get Oukitel K6000 Pro from Everbuying.net

Get Oukitel K6000 Pro from Banggood.com

Get Leagoo Elite 1 from Gearbest.com

Get Leagoo Elite 1 from Everbuying.net

Get Leagoo Elite 1 from Banggoodc.om

Get Umi Touch from Gearbest.com

Get Umi Touch from Everbuying.net

Get Umi Touch from Banggood.com

Get Elephone P8000 from Gearbest.com

Get Elephone P8000 from Lightinthebox.com

Get Elephone P8000 from Everbuying.net