As the need of performance and speed grows along with the evolution of smartphone, so does the need of energy, and that can be fulfilled by two means: By increasing the capacity of the battery or by increasing the rate of charging. Increasing the capacity of the battery results in the increase of the weight and dimension of the phones which can add up quite a cost to the phone. Also the heavier and bulky look due to battery capacity increment can also disgust the user into not buying the phone. This is the reason Qualcomm Quick Charge 3.0 was developed for all the phones running on the later series of Qualcomm Snapdragon processors.

Charging the battery is just like filling a bucket of water with water being the charges. The traditional method used in charging the battery is by filling the battery sending trickles of charge in order to overcome the risk of spilling of the charges due to overcharging. This is a very tedious process as it can take a hectic time to charge the current phones having high capacity batteries. What Quick Charge 3.0 does to improve charging rate is that it starts off slow and gradually increases the rate of flow of charge. When the battery is about to get full, it turns into trickle mode so as to prevent spilling of the charges. Thus we can see that the Quick Charge 3.0 technology can play a big role in the success of the present smartphones. 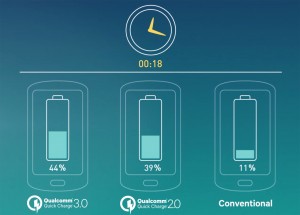 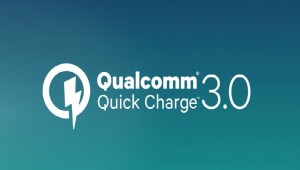 The only way to charge your battery faster is by, well, letting more charges in, in a shorter amount of time but simply increasing the output current or the input voltage won’t solve the problem. Charger with higher output current will obviously charge the devices faster but in order for the charger to function at maximum efficiency, the device they are charging also must support similar voltage and current.

Intelligent Negotiation for Optimum Voltage (INOV) developed by Qualcomm allows the Quick Charge 3.0 to coordinate with the device and adjust the voltage from 3.2V to 20V at 200mV increment resulting in 82 different voltage settings (Quick Charge 2.0 only had 4) which according to Qualcomm results in “Minimized Losses, Increased Efficiency, And Improved Thermal Performance.”

Quick Charge 3.0 is supported by devices running on the Qualcomm Snapdragon 820, 620, 618, 617 and 430 which means that the latest phones with a Snapdragon processors are already trying to show off their new charging efficiency against older phones running on Quick Charge 2.0. 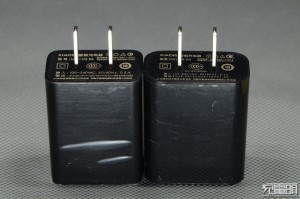 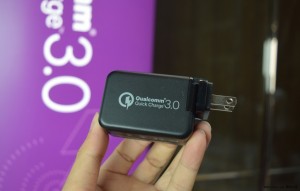