The smartphone market is heating up at this time of the year, as the main manufacturers announce and reveal this year’s flagships. The Chinese manufacturer Leagoo enters the flagship race with the new model, called Shark 1. Leagoo Shark 1 is an interesting phablet by any standards. From features to looks, the new powerhouse from Leagoo breaks the boundaries and pushes onward. 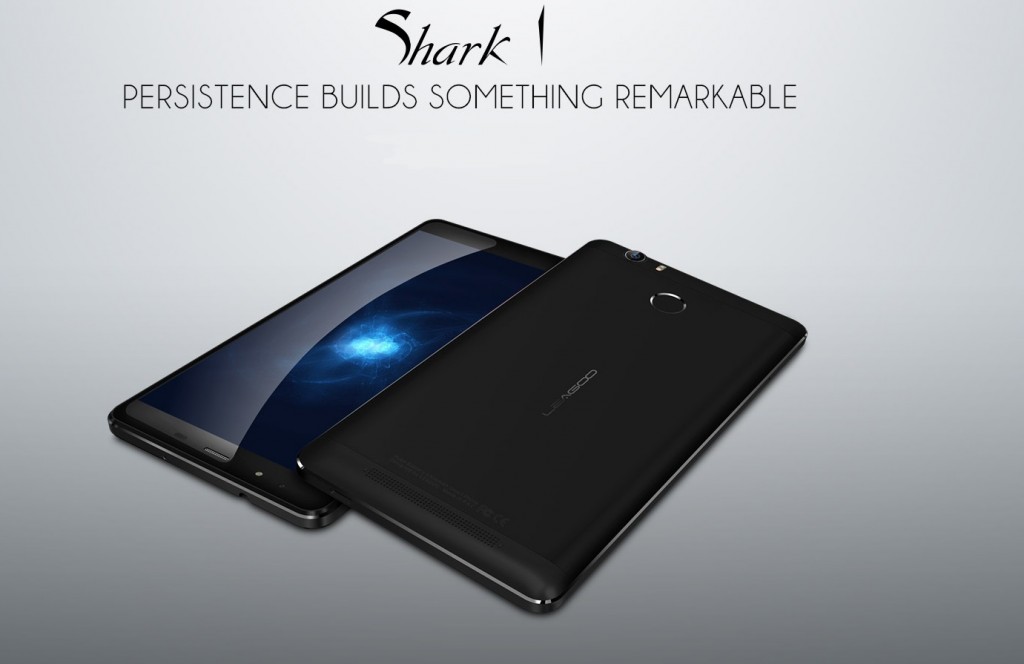 Let’s have a look at the detailed specification, courtesy of Leagoo:

The device comes in a plain black box. When you unbox it, you will find a pretty standard equipment inside. It consists of the phone, the charger, a micro USB cable, a screen protector, a cloth for screen wiping, a user manual written in English and Chinese and even a set of premium in-ear headphones. Everything is neatly packed and fitted inside of the box – almost a premium packaging. Shark 1 is made out of quality polycarbonate plastic and aluminum alloy on the side and back of the device. It comes in three colors, twilight blue, starlight silver and champagne gold. It looks excellent in every instance. Considering it has a 6-inch display, it is a lot smaller than models of competing companies. Dimensions of this phone are 158.6×82.8×8.5 mm. On the other side, the weight of this device is pretty big, and it stands 240.9 grams. On the front side, above the display, we find the front camera, ambient light sensor, the speaker, and LED notification light. Below the screen there are no capacitive buttons, giving more to the display real estate. Onscreen buttons appear when you need them, and they are lit well. On the top of the smartphone, there are 3.5mm headphone jack and IR port that you can use as a remote for TVs, home appliances, etc.

On the back side of the phone, there are fingerprint sensor and 13MP camera with dual LED flash. In the center of the back, there is a Leagoo logo and, below the removable cover, there is a speaker grill. The power button, as well as volume up and down buttons, are placed on the right side of the phone. On the left side, there is a micro sim card slot. The bottom right side is where the micro USB port resides.

Overall, this phone looks great and feels great in the hand but, it is not for everybody because people with smaller hands will have troubles using it. 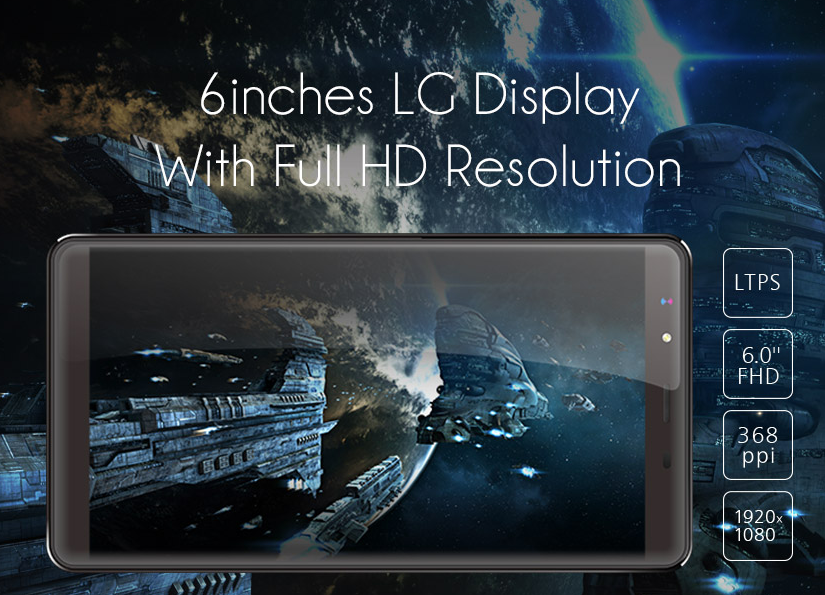 Made by LG, display on this phone breaks the 5.7″ boundary, featuring 6″. Manufactured in LTPS technology, this 6-inch full HD “monster” will provide 30% more brightness than a standard LCD and, it will reduce power consumption by 20%.

It has great viewing angles and superb contrast so that you can enjoy using your phone in direct sunlight and other lighting conditions. This display has pleasant looking colors and a respectable pixel density 368PPI. You will certainly enjoy multimedia on this device as this screen leaves no one indifferent. The screen is protected with Corning Gorilla Glass 3 and is resistant to scratches. The 2.5D curve is applied to the glass, as it is standard these days.

This device is equipped with MediaTek’s 64-bit Octa-core processor, clocked at 1.3GHz. Mali-T760 graphic chip is in charge of media, games and other graphical stuff. 3GB of DDR3 RAM is on board and 16GB of internal storage follows. Not quite much for a flagship device, which can be considered as a flaw, but when you need more room, you can always expand it with additional 64GB via micro SD card.

To put it in a few words: performance on this phablet is great.  You can enjoy all the latest 3D games as well as full HD movies with ease. Of course, everyday usage is smooth, and we haven’t encountered any lag whatsoever. For all of you benchmark and specs geeks out there, here is the screenshot of the results of AnTuTu benchmark: 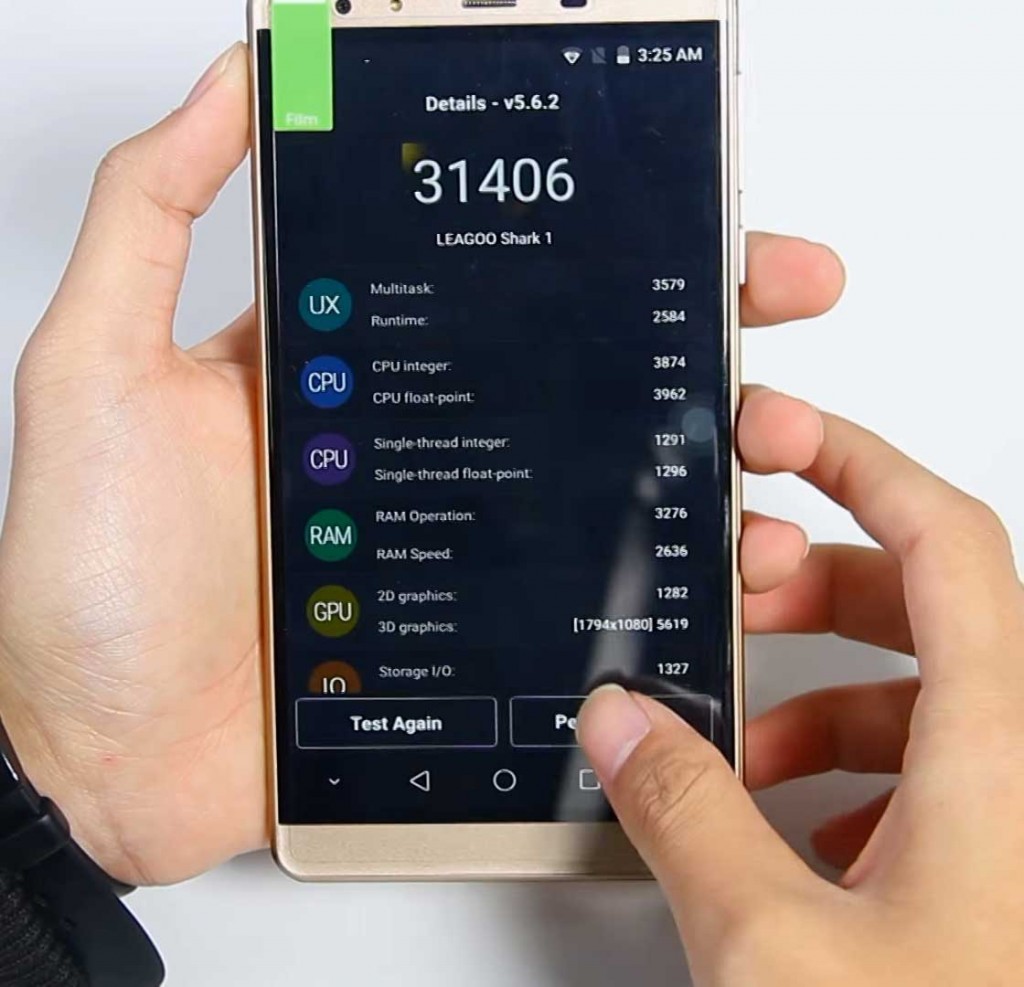 Regarding this results, you’ll notice that it’s a midrange result, way behind the leading flagships of worldwide tech giants. Still, the chip is fast and reliable, but not superb, compared to the latest global flagships. Considering the Chinese markets, this results is among the best. You can rely on Leagoo Shark 1 to provide you lag-free experience for a long period of usage.

Leagoo Shark 1 packs decent camera performance. It is equipped with Sony’s 13MP BSI-2 sensor camera on the back and 5MP camera for selfies, and HD video calls on the front. This wide-angle primary camera offers smooth performance with its five lenses and large f2.0 aperture. The size of the sensor is not significant, but software algorithms make up for it. The interface is standard, clean, and provides standard features for the standards of today. Images are full of details with little to no noise. Colors are a bit saturated, but that is the trend nowadays, and we are ok with it. With the help of dual-tone LED flash, images look natural when shot in the dark and you don’t get those too bright photos. Front facing camera is very good as well.

Here are some camera samples for you to decide yourselves.

The level of details is great, and the low-light images are bit weaker, as expected. Video performance is on par, with the performance of the processor – the phone offers 1080p with 30fps at max. Videos shot on this phone are smooth, noise free and even have high-quality sound.

This smartphone runs on Leagoo OS v1.2. It is Leagoo’s skin on top of Android 5.1 Lollipop. It has a flat interface which looks very professional and a lot of little tweaks that add to performance and make general usage better. Of course, you can install all of the latest apps and games in the Play Store. All apps will run great and with ease. The manufacturer didn’t state anything regarding the OTA update to Android 6.0 Marshmellow yet, which might be considered as a downside for some users. Shark 1 has dual SIM, dual standby support which is excellent because many people have a personal SIM card and the other one for work. The device is 4G LTE network supported, and it has good signal strength.

Bluetooth 4.0 is supported so you can spare your battery and communicate with other devices more efficiently.

Wi-Fi 802.11 b/g/n/ receiver is used in this phone and our unit didn’t have a problem connecting to a wireless hotspot. One flaw that we can mention is the lack of the NFC communication

Here is another field where Leagoo Shark breaks boundaries: 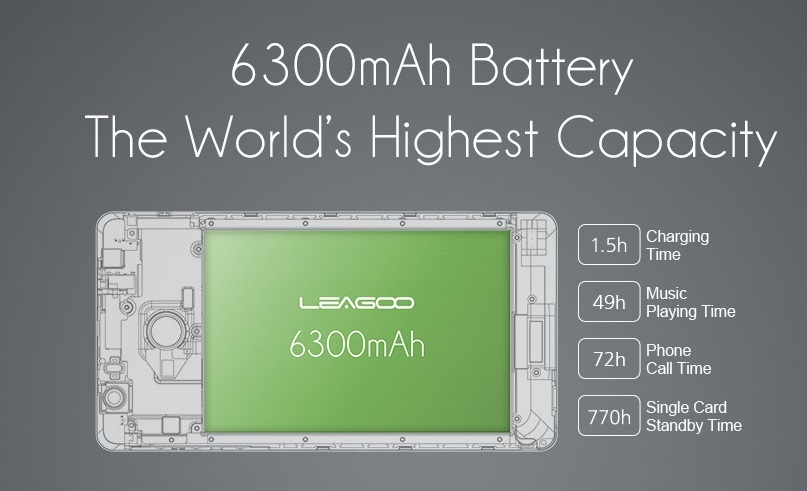 This smartphone is graced with a 6300mAh Li-Polymer battery. This superior battery power can last you for days even if you are a heavy user. Manufacturer states that this phone offers over 72 hours of general usage and amazing 770 hours of standby time.

Not only that, but you can watch online videos for 25 hours straight and listen to music over 49 hours. We believe that this is the first time that smartphone makers haven’t exaggerated. Like Juggernaut from Marvel comics, Leagoo Shark 1 won’t run out of battery juice no matter what you do to it.

It is simply amazing, and it is not even the best part of it. The best part would be its rapid charge LGQC v3.0 technology. It charges the phone in 3 hours (considering its massive battery, this is quite a feat) and you can use the device for a day after you charged it for only an hour.

Other features include various sensors like gravity, ambient light, motion sensor and others. The device supports compass and positioning systems such as GPS, GLONASS, Galileo, and BeiDou. You will never get lost, and will be able to pinpoint your exact position in a matter of seconds.

Shark 1 has the latest generation of a fingerprint sensor. The sensor is fast (0.39 sec to unlock), responsive and quite useful. The mere size of the device might get in the way when unlocking the device, but it’s manageable.

The sound strength and quality are another fields where this phablet shines. Shark 1 uses AWINiC K6 amplifier and offers pleasant and loud sound over the earphones and speaker.

When you come to think of it, no phone is perfect. This device, as well as other, has its ups and downs, its pros and cons. Here’s what we found so far:

That is a tough question. Depending on its price range it could sell like hotcakes. In the “sea” of smartphones, this jewel is shining brightly.