For a couple of years, it looked like Apple would lead the market with sapphire displays on its iPhone range.

However, as GT Advanced the company Apple partnered with failed to deliver the technology got shuffled into the background. That company is now being wound up. With it went the benefits of scratch proof glass and near indestructibility.

Others have never seen that worried, happy as they are with Gorilla Glass, Dragontrail or cheaper substances. However, Shenzhen-based Bluboo is apparently on the case with a new screen for its upcoming Picasso device. Judging by the early marketing, it could well be for a sapphire-based technology.

GT was in the process of selling its sapphire furnaces off, but they aren’t likely to have made it out of the old factory yet. So, if Bluboo is working on sapphire, it must come from a new source. 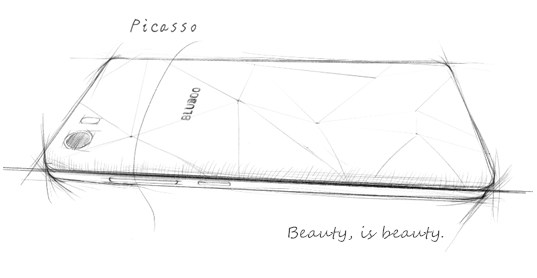 A sapphire screen will certainly give the company a boost over its competitors. Will that be enough to differentiate against other Android phones.

Bluboo Look to Sapphire for Sparkle

Little is know about the phone with only the above sketch and the tagline “A shield for you” in the marketing teaser, which certainly hints at some sort of clever glass.

With no hint on specifications or design, the Picasso remains an enigma for now, but could become a phone that is much desired after as Bluboo tries to build its brand to match the likes of Xiaomi.

Sapphire is second only to diamond in hardness, but making it in sheets for phones has proved remarkably difficult and expensive.

That will make the Picasso a premium device, and one that will be challenging 2016’s other high-end models in China, while generating interest in other markets.

Keep your eyes open for specifications and more information on what could be one of the hottest devices out early next year. More news may appear on the Bluboo Facebook page.