With the rise of Chinese smartphones increasing at an alarming pace, Bluboo Xtouch is yet another handset that carries a great deal of affordability. However, do its specifications and overall aesthetics match its price tag? Looks like you will eventually find out in our review. 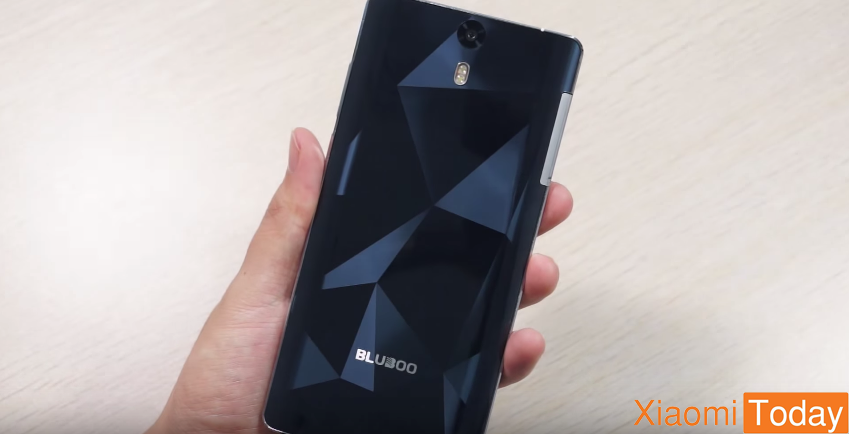 Design and appearance goes a long way for a large percentage of consumers. Starting off, the rear side of Bluboo Xtouch gives off a shiny appearance, which looks terrific since it shows that the company’s design team invested a fair amount of time in making the device sport a premium exterior. This approach was followed by Infocus M810T, and it looks equally beautiful. Instead of possessing a single shiny surface, the affordable gadget has varied fragments that give off a much more appealing look when light reflects off of it, as you can clearly see in the image below. While Bluboo Xtouch might not possess an ‘all metal’ design, but certain areas are still covered in it. 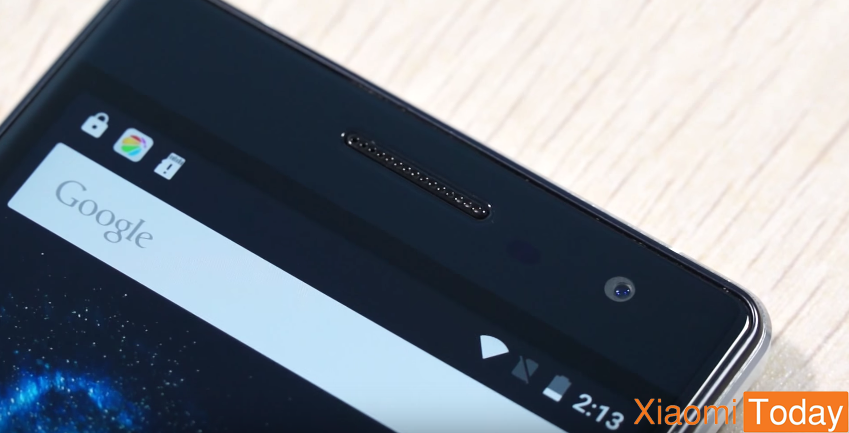 Another thing to notice here is that the device is not completely rectangular, which is a great approach by the company. Phones without sharper edges are much simpler to grip and best of all, they are not discomforting when you decide to hold them from the edges. Surprisingly, Bluboo Xtouch is significantly lighter compared to the rest of the smartphones we have reviewed, but at no time did the phone feel flimsy, suggesting that the company did incorporate a strong a body in order to make its product as durable and premium as possible. 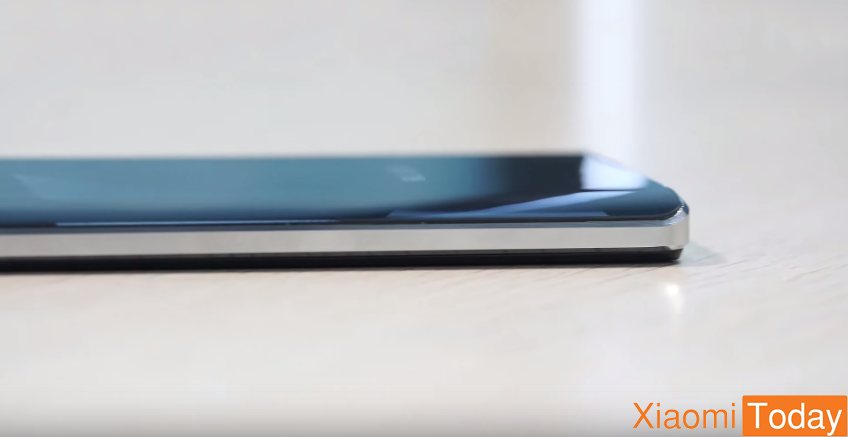 However, if we kept on prattling about the phone’s design, then the entire review would end up comprising of that, and all of us know that other factors contribute on how good a smartphone really is.

While this category does not hold sufficent weightage, different button placements are taken as a straight ‘no go zone’ for consumers since they have grown accustomed to the button configuration of their own handset. However, you will find that Bluboo Xtouch has a decent button placement. To start off with, there is a huge home button present at the bottom center of the smartphone and will give a nice, solid tactile feeling to the user once they start pressing the button frequently. We pressed the button numerous times and since the phone has been assembled with great care, the home button did not move out of its original position or move to the left or right side when we decided to present it from its corners. 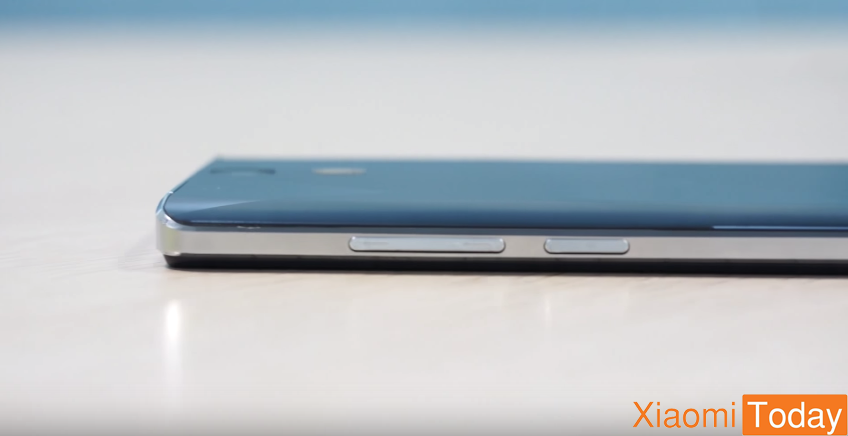 The power and volume buttons are present on the right hand side of the smartphone (if you place Blueboo Xtouch with its rear side facing the surface), and this type of configuration is becoming quite common, particularly from Chinese manufacturers, which means that whatever phone you decide to purchase next; there is a very high chance that you will have to get used to the same button configuration present on this device.

Bluboo Xtouch: Ports and other features 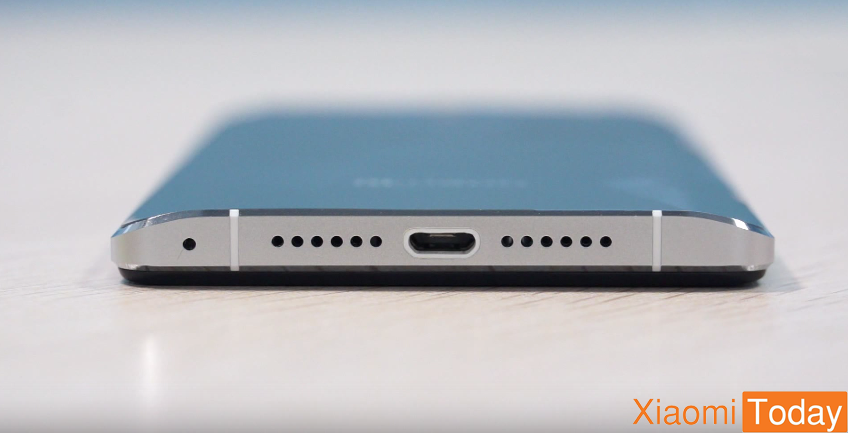 Another common thing between Chinese smartphone manufacturers is that they tend to place the phone’s microUSB port at the bottom, and the 3.5mm headphone jack at the time, and this is exactly what Bluboo Xtouch has done. The battery is non-removable, so do not even think about attempting to pry out the rear side of the smartphone because you’ll just end up causing irreparable damage to it. The advantage of having a microUSB port present right at the bottom is that there are several speaker openings present at the bottom, and that will cause more sound to emanate from the device. Though there are very rare occasions when people actually make use of these speakers, it is always great to experience superior sound quality.

As for the SIM and expandable storage slots, there is a slot present on the left hand side of the smartphone, and here is where Bluboo Xtouch does things extremely well. The SIM card tray allows users to place in not two cards while sacrificing the other, but you can place a total of three cards, which will obviously comprise up of two SIM cards and one storage card. In other words, you are given complete flexibility over carrying one, or two numbers and at the same time, run a removable storage card. Looking at all the Chinese smartphones that we have seen until now, not one of them provides a solution as flexible as this one, and we believe that this is going to be one of the primary selling points of the smartphone.

The disappointing thing about Bluboo Xtouch is that there isn’t a USB-C port present. USB-C easily trumps microUSB 2.0 and 3.0 in both speed and the maximum power intake, meaning that effortlessly serves dual purposes. If this port was added to the smartphone, then there would be yet another reason to purchase the product. 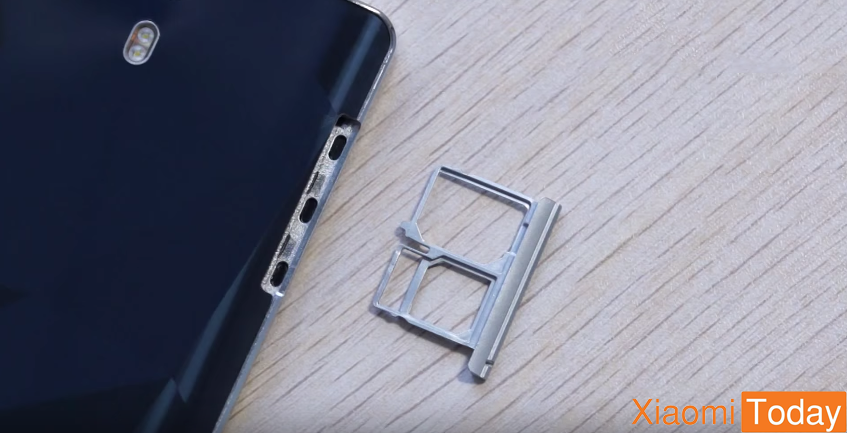 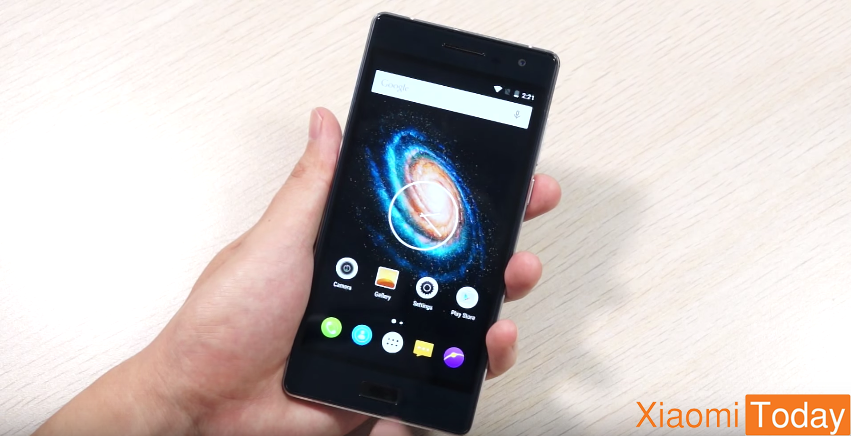 While most Chinese smartphones are shipped out sporting a phablet sized form factor, Bluboo Xtouch has a 5.0 inch OGS (all glass solution) with a resolution measuring at 1920 x 1080 resolution. We have taken some screenshots of the resolution, showing how detailed the display quality is. Another thing that we noticed about this is that the display of Bluboo Xtouch has terrific viewing angles. 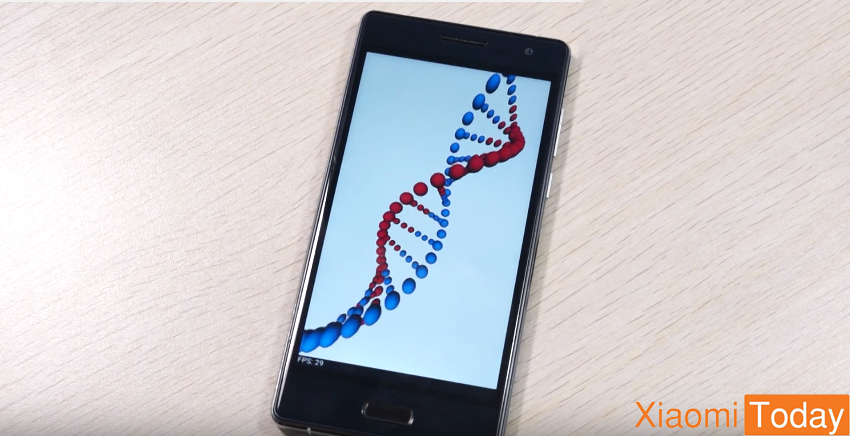 If you tilt your head to the left or right hand side of the smartphone, the image quality remains the same, meaning that your peripheral vision does not have to be in line with the screen just to get a good viewing experience. Once again, the company has done a terrific job in a completely different category.

So far, we have been quite impressed with Bluboo Xtouch, and the device running Android Lollipop 5.1 could mean that a compatible update of Android Marshmallow could be available for this smartphone in the near future. Let us keep our fingers crossed and see if the company will cater to its clientele as well as it did with the features side of the smartphone. Coming to the interface, the octa-core processor and 3GB of RAM displayed their magic quie prominently because the operating system ran smoother than butter.

Apps opened up really quickly and thanks to the extra amount of RAM, we were able to open up multiple applications in quick succession and did not feel that the smartphone felt sluggish for a single moment (this is also because we had installed limited applications in the internal memory. Normally, when you start to add things in the on-board storage, there is a slight chance you will start to experience a slight performance decrease). However, you should keep in mind that additional amount of RAM will put extra stress on the battery, but we are certain that the extra performance will always be the more required variable for users, at least till a certain degree.

For users that want to purchase Bluboo Xtouch but are afraid that the device’s interface will be presented in the Chinese language, there are several languages to choose from and depending on your location and of course your native language, you can switch to that from the settings menu.

Now let us come to the primary reason segment as to why consumers want to purchase a smartphone in the first place? Raw performance. We fired up AnTuTu and Geekbench to see how the device would fare when pitted against the remaining competition and we have to say that the smartphone might have missed its mark, but it is still able to achieve a satisfactory score, as you can see in the image below. 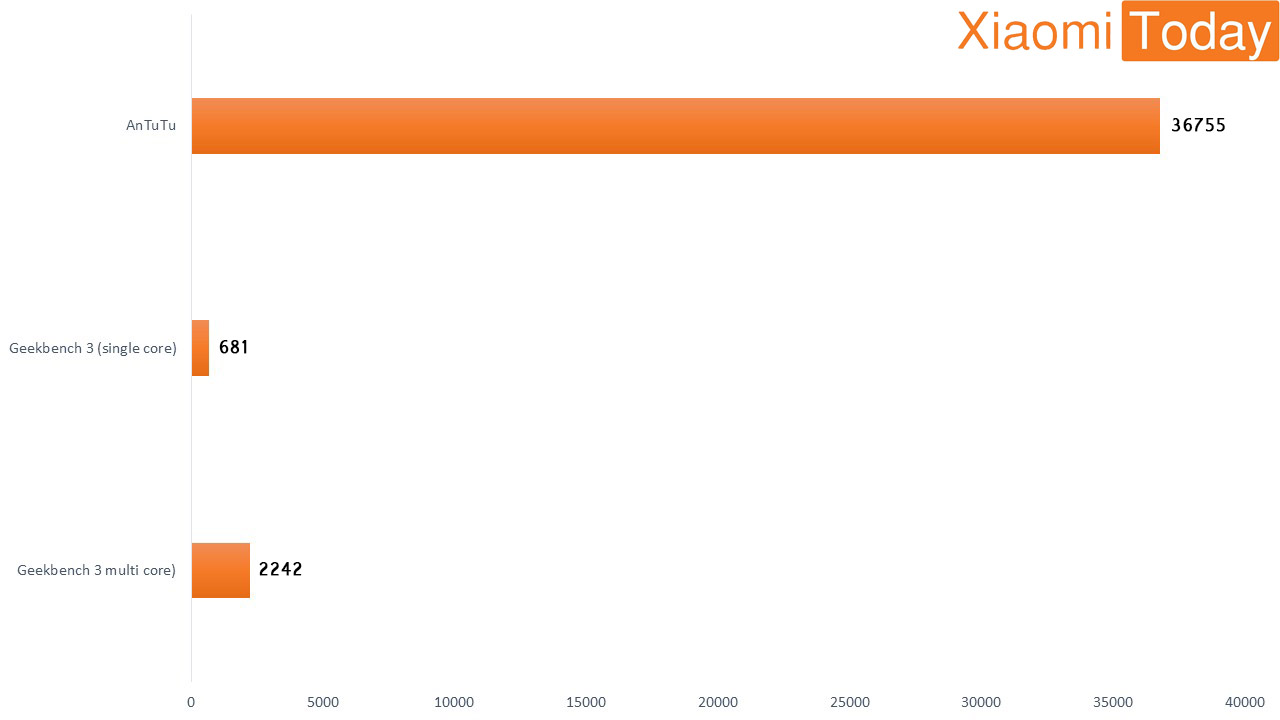 Despite the fact that Bluboo Xtouch has an MT6753, and a quad-core Cortex-A53 running at 1.3GHz, the smartphone was surprisingly able to score a respectable position in both Geekbench and AnTuTu. Now, don’t get us wrong, performance is definitely not the strongest attribute of this smartphone right here, but then again, Bluboo Xtouch is not intended to target those with a thicker wallet and who demand performance over everything else. It will cater to the requirement of those users that are on a strict budget and rightly so, with those scores, we think that the price is perfect with the level of performance we are getting from it.

Right next to a smooth performance and performance; the very next thing that users require is sufficient battery life. Bluboo Xtouch has a 3,050mAh cell so we decided to take it for a battery test. We tested out the smartphone with its screen brightness set to 100 percent. In this way, you will be able to experience the worst case scenario when you purchase Bluboo Xtouch.

Having a larger battery is always a great thing to have, and this was witnessed from Bluboo Xtouch when we were able to rake out slightly over 13 hours while connected to 3G, and 7 hours on 4G. Keep in mind that we carried out some casual browsing tasks and occasionally, we streamed high-resolution videos. We did this to give you an idea on what kind of battery life will you experience should you decide to carry out similar tasks as well.

Even though LTE modems are extremely tough on battery life, we were still expecting a much better result than this.

Bluboo Xtouch: What features make this smartphone stand out?

Bluboo Xtouch is a great Android powered handset, especially if you are on a strict budget that does not go above $200. There are several features that make it feel that a premium quality smartphone and we would like to point out those features right now. Additionally, we will also point out what we felt could have been added to Bluboo Xtouch in order to make it even better than before. Hopefully the company will be reading this so that they will be able to release an even better device in the future.

Things that we liked about Bluboo Xtouch

After looking at each and every aspect of Bluboo Xtouch, we have summarized the following scores below:

There is no denying the fact that Bluboo Xtouch is an amazing smartphone when it comes to appearance and aesthetics. Moreover, its SIM tray can accommodate not two, but three cards ranging from two SIMs and one storage card, making it the smartphone’s highlighted selling point. Additionally, the phone has the same camera sensor as Motorola’s Nexus 6, which is still a strong contender despite being released in 2014. However, we feel that if a USB-C port would have been available, then it would have given customers another compelling reason to purchase the handset.

Before we conclude our review, we would like to point out that since Bluboo Xtouch has a microSD card slot capable of accepting a maximum card capacity of 64GB. We want to remind you not to go down the easy road and purchase an inexpensive one since those are the ones that will sacrifice both speed and reliability for a low price tag. Instead, spend a little more money and purchase a microSD card from reputable brands such as SanDisk or Samsung and trust us, you will not regret your purchase. Cheaply priced storage cards will eventually get corrupted and you will lose an abundant amount of data, not to mention that it will take a very long time for the data to be recovered, if it can be retrieved at all.

Overall, Bluboo Xtouch is a terrific smartphone to purchase and if you visit online retailers such as Gear Best and Geek Buying and see the price tag, you will see that we were right all along. If you are interested in purchasing the smartphone, then we have added buy links for your convenience.