Last time, we were successfully able to get our hands on Ulefone Paris and in doing so, decided to display the performance and features of the budget handset. This time, we will be providing a detailed comparison between Ulefone Paris and of course the smartphone that looks like near identical to Apple’s iPhone, Ulefone Be Touch 2. Apart from their appearance, we will also be detailing all the hardware, features and pricing differences between them so you know which handset to purchase when the right time approaches. 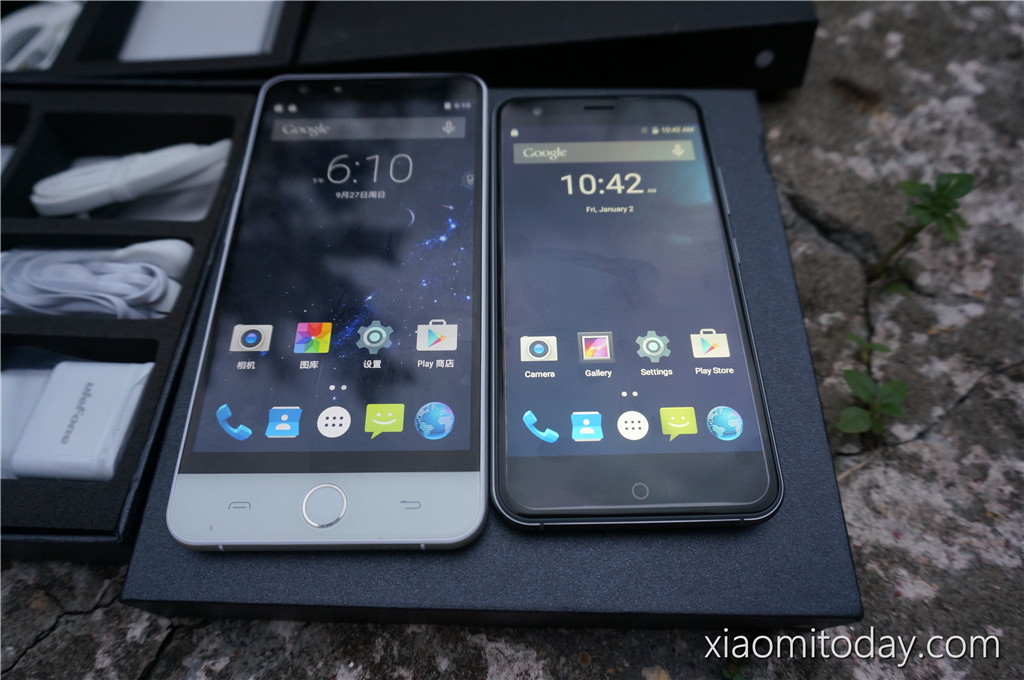 Ulefone Paris vs Ulefone Be Touch 2: Packaging and first impressions 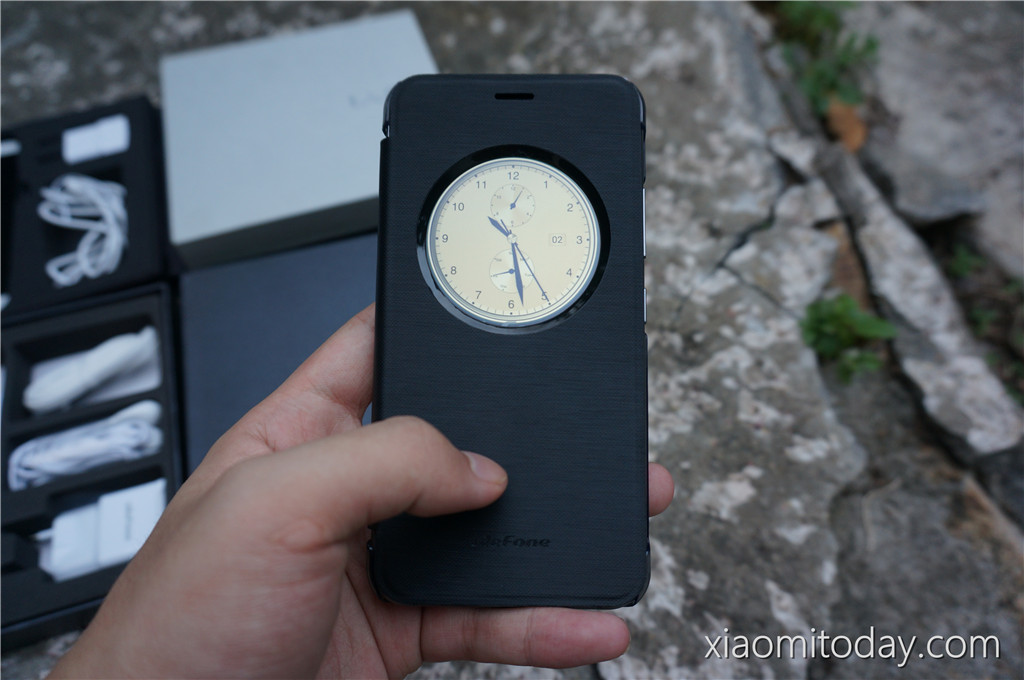 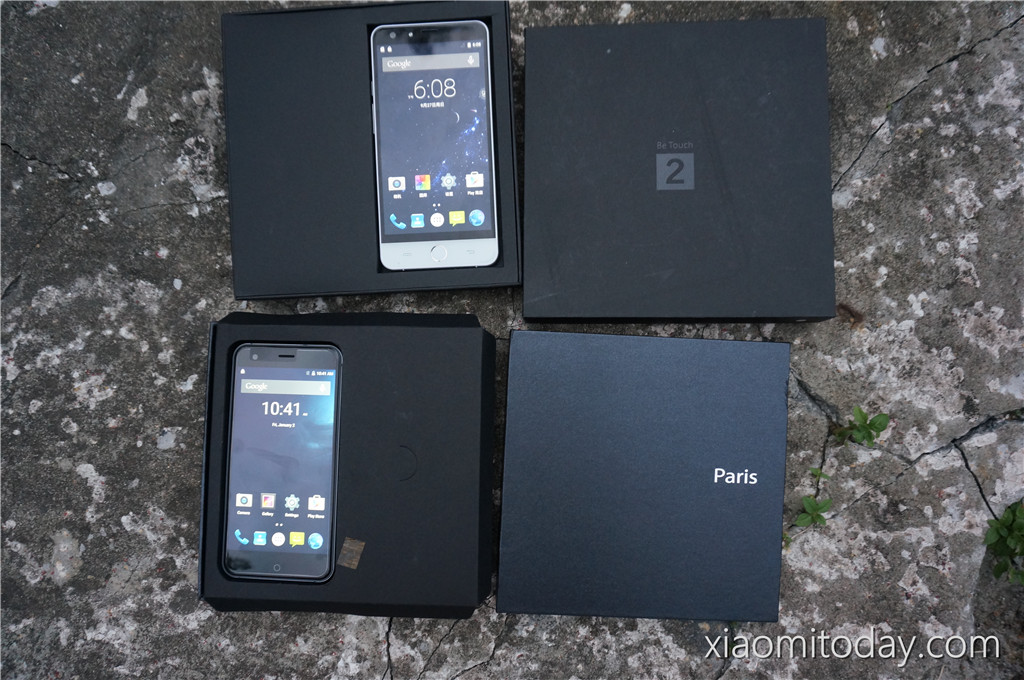 Turns out that both OEMs made a great of effort in designing the box and bundling all the accessories of devices. This is because the boxes look absolutely flawless in terms of appearance as well as in terms of protecting both smartphones and their accessories from any sorts of damage. Let us hope that the build quality of Ulefone Be Touch 2 is as flawless as the packaging itself otherwise all of those positive first impressions are going down the drain. 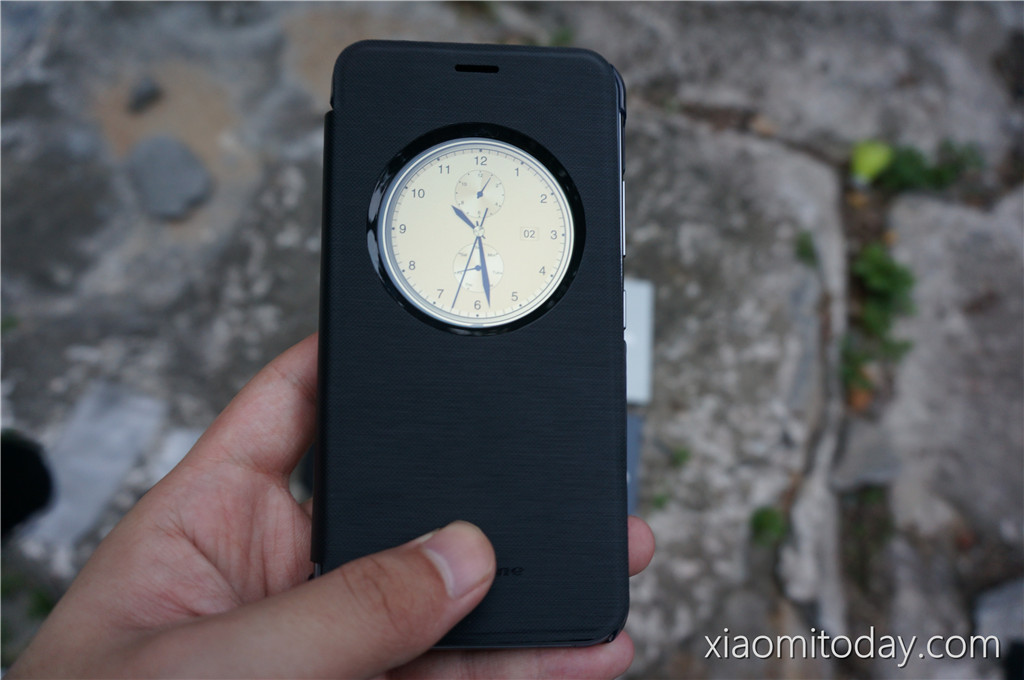 Just like UMi Hammer 2, we got our fair share of accessories with Ulefone Be Touch 2. Out of the several accessories, the most notable happens to be a smartphone case that came along with the handset, and not just any case, but one that has a clock placed on it. In this way, we will not be forced to check our phones to check the timings after every short intervals and at the same time, our costly product will be protected from external damage. For added protection, there was already a screen protector present on Be Touch 2, which shows that the Chinese company is sparing no expense just so that we get to enjoy a perfect smartphone package. 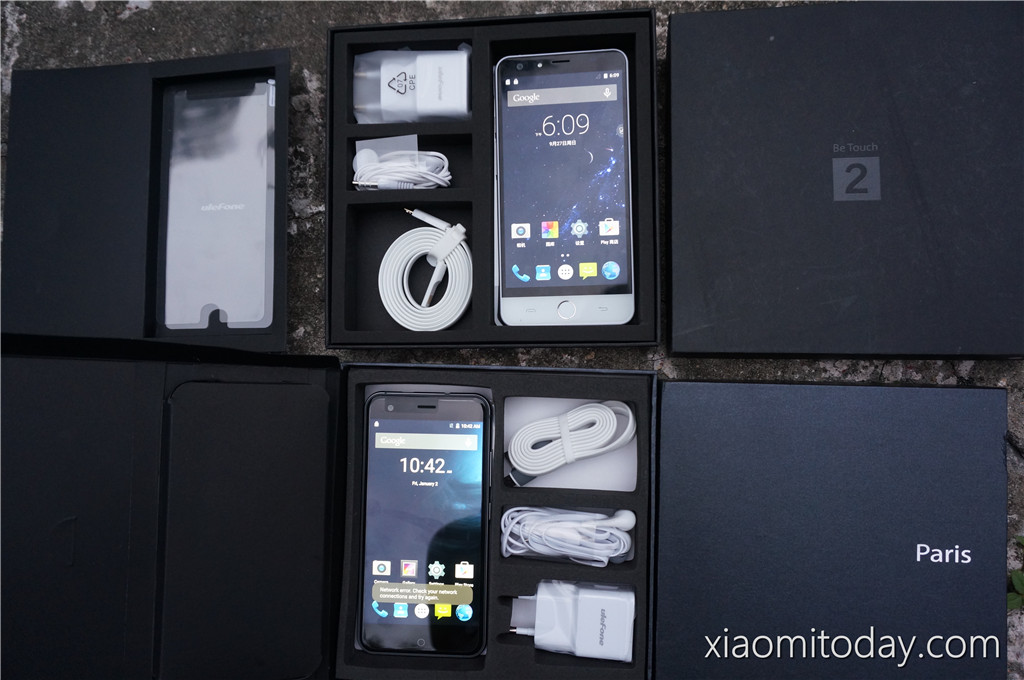 One other thing that we felt should be mentioned (and this is another part of the accessories bundle) here is that USB cables present in the packaging were completely flat. While this might seem as an insignificant addition to this part of the post, flat USB cables have a far less chance of being entangled and are able to withstand more wear and tear. High quality USB cables are not the cheapest of accessories around, so you will have to exercise a lot of care when handling them.

Ulefone Paris vs Ulefone Be Touch 2: Build and display quality 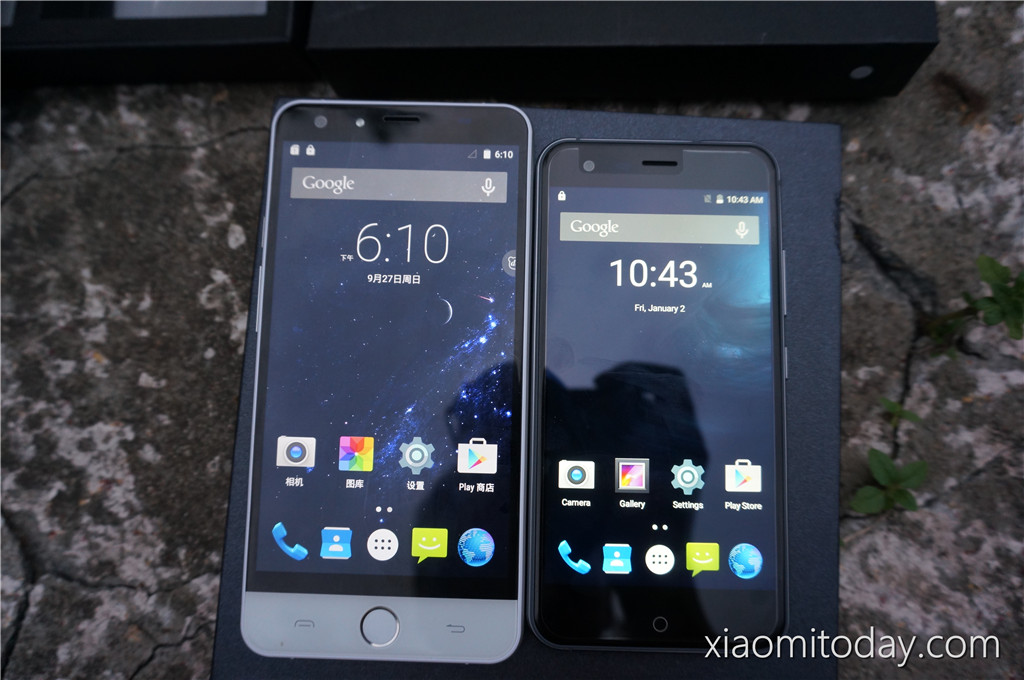 Both Ulefone Paris and Ulefone Be Touch 2 have a metal frame that is extremely light but quite sturdy. When we held both devices in our hand, the featherweight of both smartphones gave us the impression that they were not made up of impressive materials. However, upon close inspection of the bodies, we figured that they were constructed from a metal alloy, along with a design that has been catered to grip into your hand quite easily. Ulefone Be Touch 2 was slightly more difficult to grip because it has a much larger screen compared to Ulefone Paris; 5.5 inch against the 5.0 inch present on the latter. 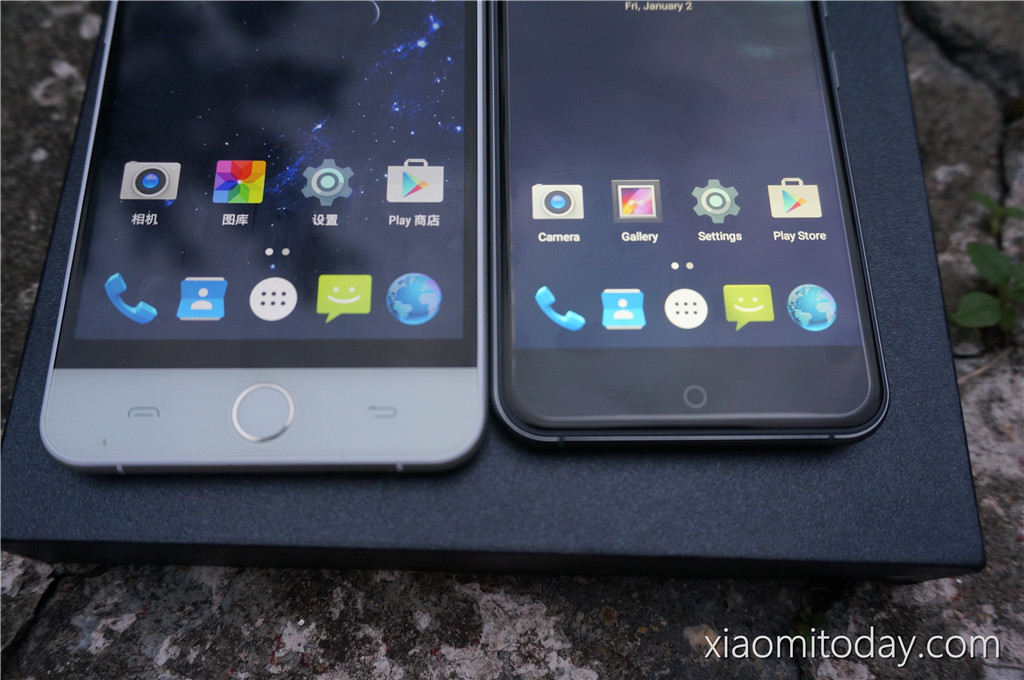 We also noticed that Ulefone Be Touch 2 has a much detailed resolution than Ulefone Paris. Upon close inspection, and right after checking the hardware specifications table, the 5.5 inch smartphone has a 1080p resolution while its smaller screen cousin has a 720p display. Keep in mind that Ulefone Be Touch 2 also has a much larger price tag, which will justify the higher resolution. Remember, in majority of the cases when you purchase a smartphone, you actually do get what you pay for. 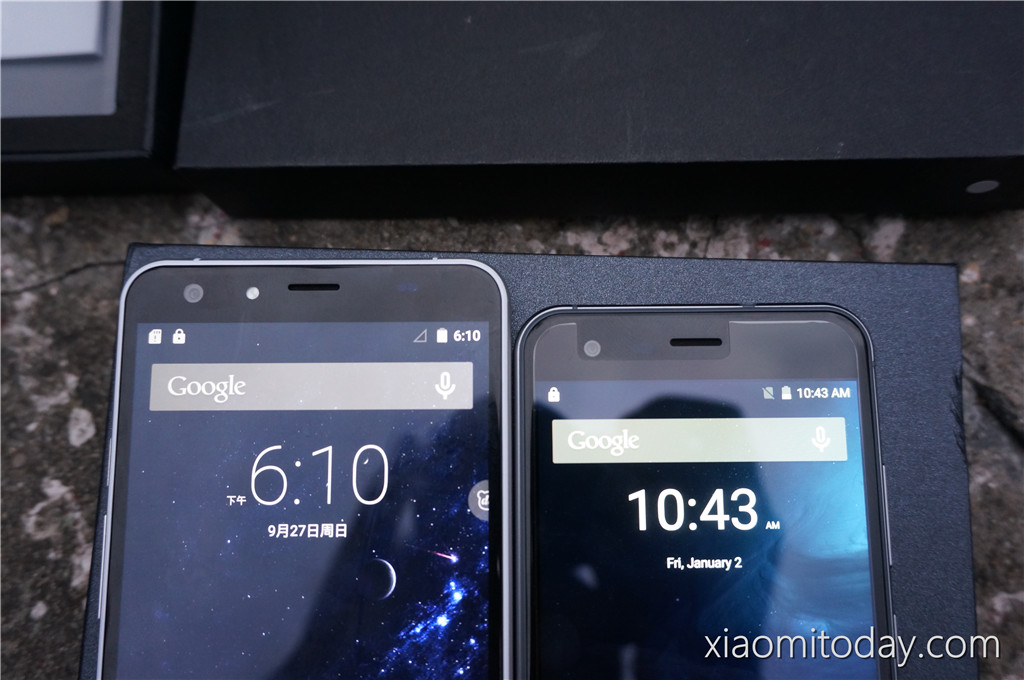 Ulefone Paris vs Ulefone Be Touch 2: Button and components placement 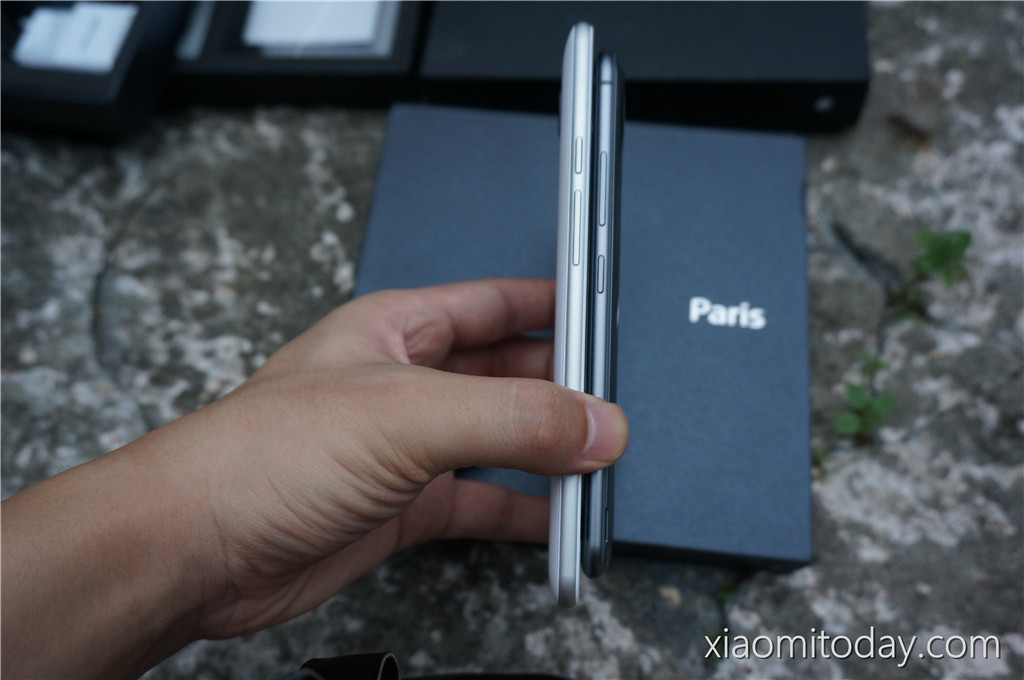 In addition to their screen sizes, Ulefone Paris and Ulefone Be Touch 2 have a huge list of differences separating them. First of all, Ulefone Be Touch 2 has a physical home button with a circular metallic ring around it, which is very similar to the approach that Apple takes with its iPhones. The circular home button is surrounded by two capacitive buttons, with the volume and power buttons present on the left hand side of the device. 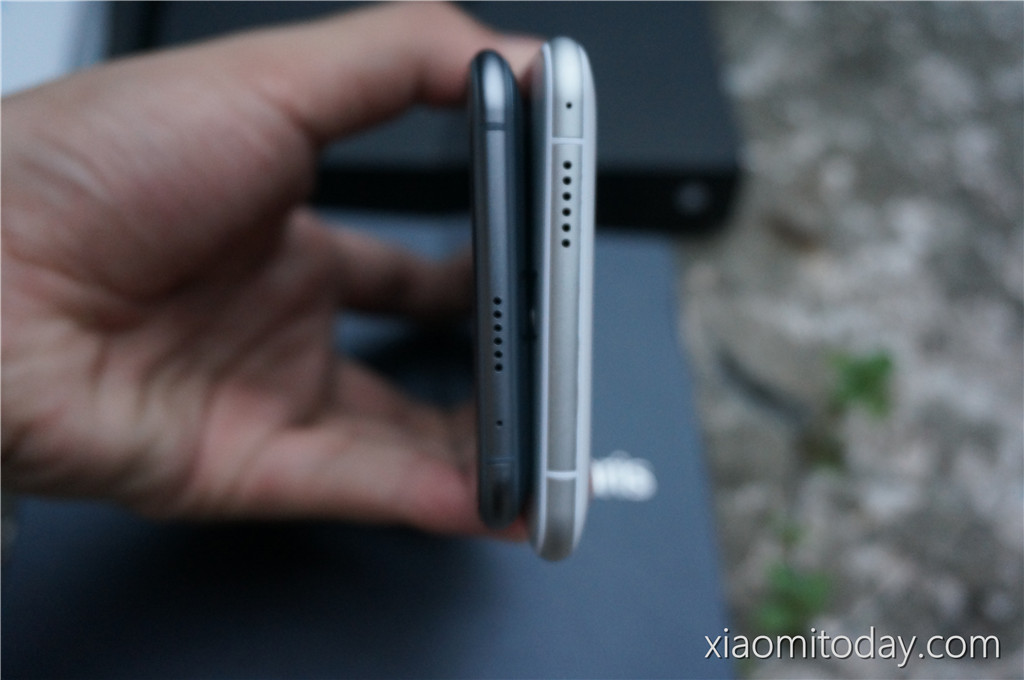 As for Ulefone Paris, the 5.0 inch smartphone has no physical home buttons, although the circular home button resembles what is present on Be Touch 2. This time, the volume and power buttons are present on the right hand side, with the power button placed right at the bottom of the volume buttons (on Ulefone Be Touch 2, the buttons placement was completely opposite). 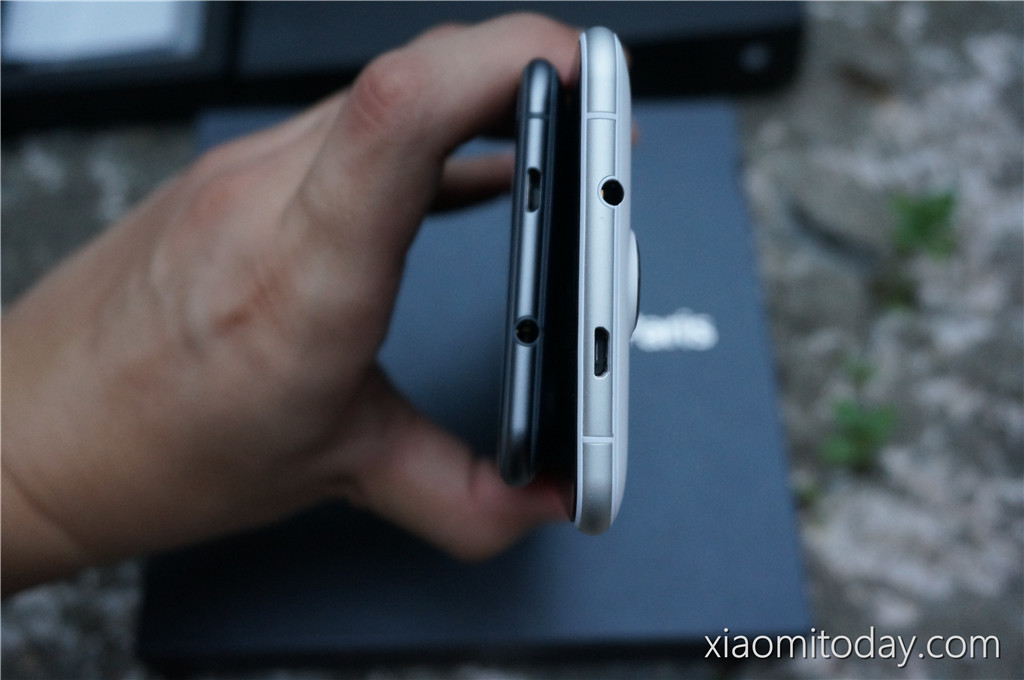 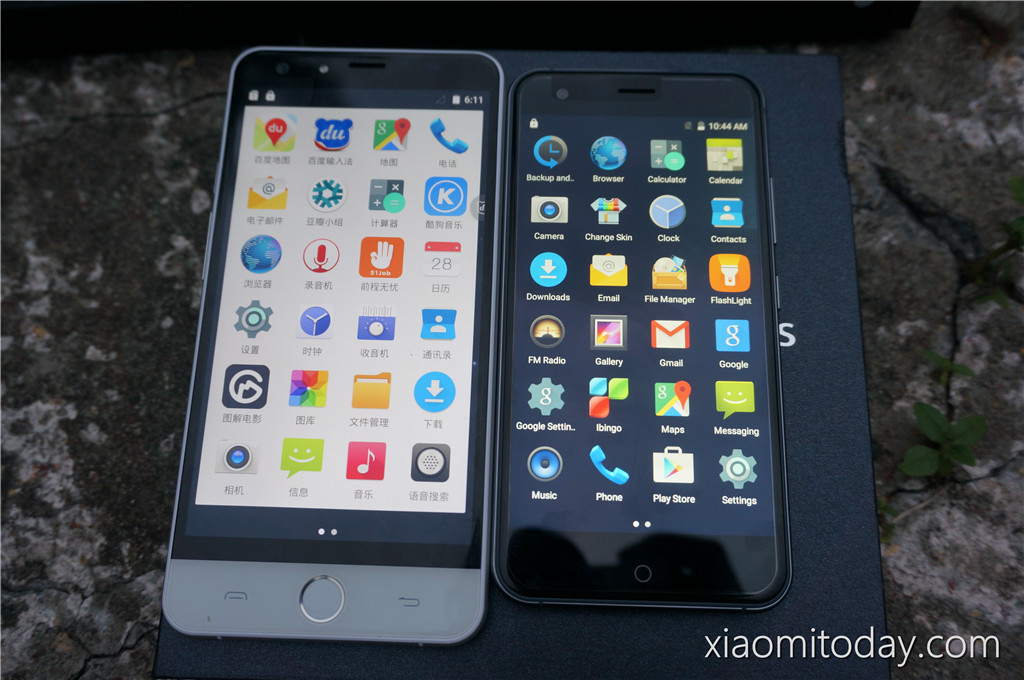 Due to the fact that both smartphones are running the same operating system update (Android Lollipop 5.1) and that they belong to the same company, we were not surprised about that Ulefone Be Touch 2 and Ulefone Paris sport the exact same interfaces. However, matching interfaces should not be the only concerned thing about these devices because the hardware specification differences between Ulefone Be Touch 2 and Ulefone Paris 2 means that the operating system was functioning much more smoothly on the former than it was on the latter. 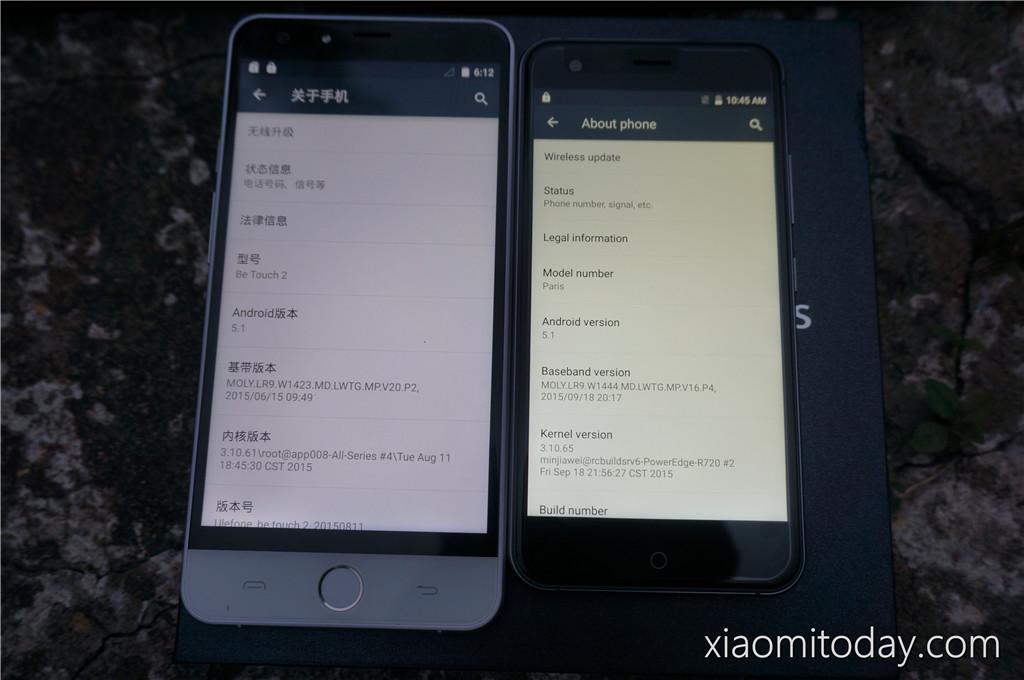 This was obviously expected since the 5.5 inch 1080p resolution handset has much better hardware than its smaller cousin (we will be detailing out all of these right at the end). 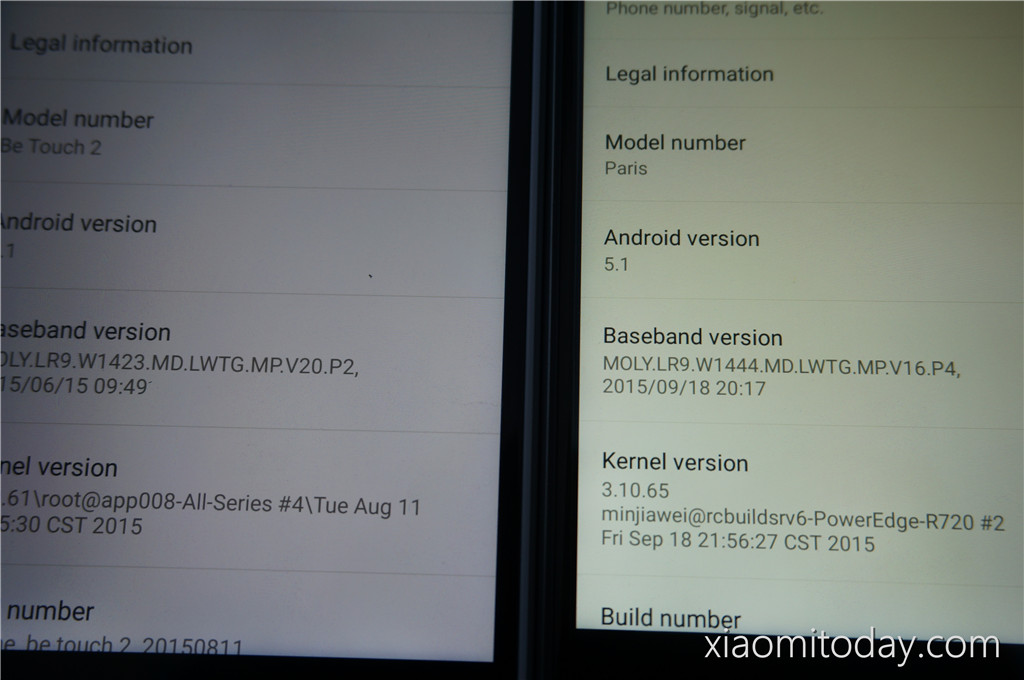 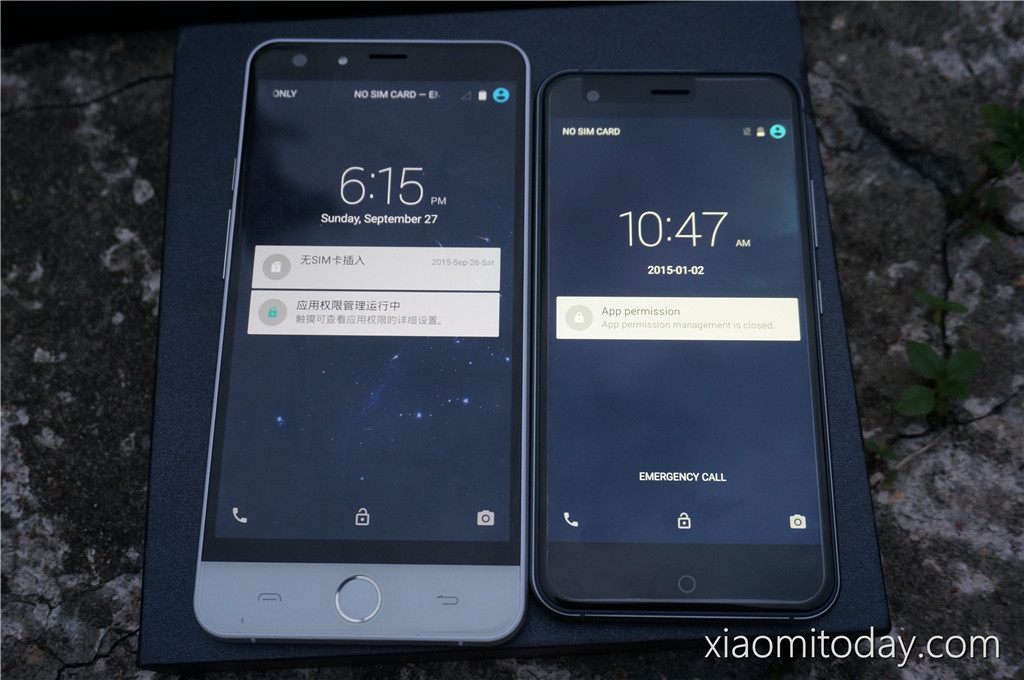 There are a ton of differences between both smartphones and if we post all of them here, it will obviously become too confusing when you have decided to order one. Instead, we did the most convenient thing for you guys; compile a whole specifications table which details each and every important hardware and feature detail between Ulefone Be Touch 2 and Ulefone Paris.

Attention: The internal data of table “7” is corrupted!

There is a $70 difference between Ulefone Be Touch 2 and Ulefone Paris (keep in mind that the $129.99 price of Ulefone Paris 2 will end after the promotion period), but to be fair, the former has much better hardware specifications compared to what is present on Paris. Firstly, an MT6752 chipset present in Be Touch 2 can easily beat chipsets like Snapdragon 801 in performance and efficiency, while MT6753 (present in Ulefone Paris) will only be able to score a decent amount of performance, but not exceed the level of Snapdragon 801 and MT6753. Furthermore, Be Touch 2 also has 3GB of RAM, which is the amount that present on flagship smartphones these days. 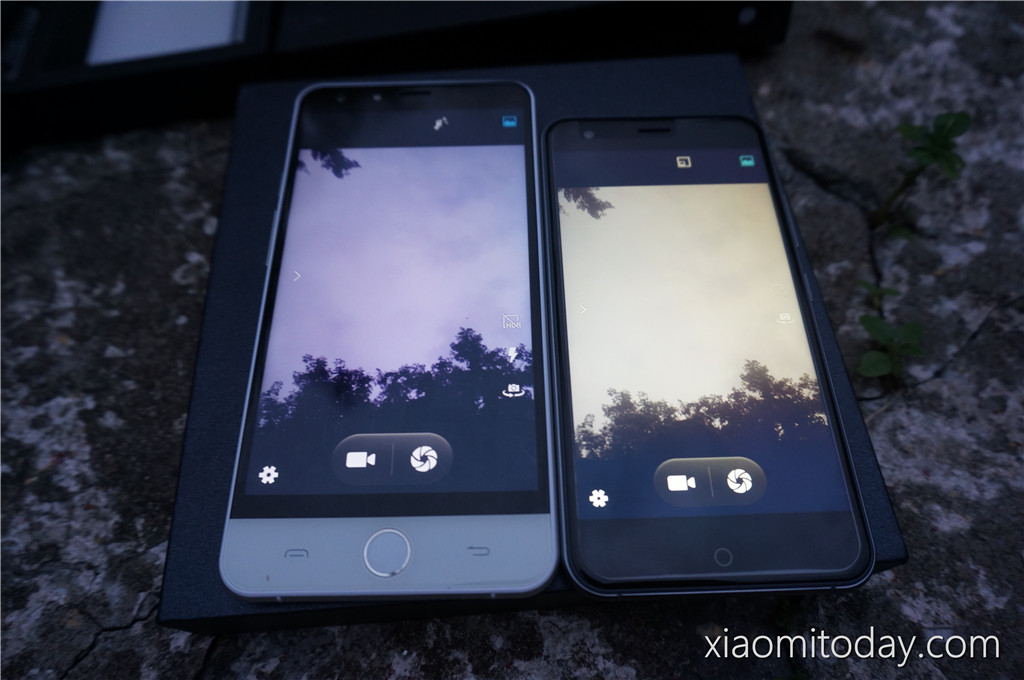 If you want to experience a great deal of performance from an Android powered smartphone, along with great features such as an impressive camera sensor, large battery capacity, LTE connectivity and expandable storage, then Ulefone Be Touch 2 is definitely the choice for you. However, if you want to sacrifice just battery life, image capturing quality and performance while saving up to a $70 bill, the Ulefone Paris will serve as the perfect choice for your next smartphone purchase.
Buy Ulefone Paris from geekbuying.com Buy Ulefone Be Touch 2 gearbest.com