Xiaomi Mi4c, the upcoming smartphone that is going to feature a Snapdragon 808 is expected to come with a very affordable price tag designed to help consumers forget all about LG’s G4, which is also running the same chipset. However, we have just received word that Xiaomi Mi4c is not only going to be available to purchase in the 16GB and 32GB model, but a much higher internal storage version.

According to a source, Xiaomi Mi4c will be available to purchase in the 64GB internal storage version, but did not specify if the smartphone was going to be running a higher amount of RAM than 3GB, which is present in the 32GB model. If there is no information regarding this, then it probably means that the 64GB model will also have 3GB of RAM. 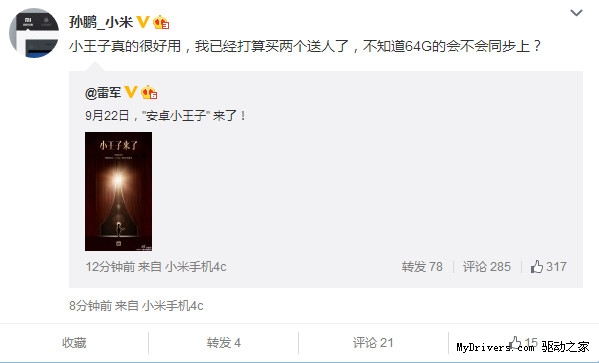 Xiaomi Mi4c is expected to feature a 5 inch display with a resolution of 1920 x 1080. The most interesting thing about the smartphone is that it might have an Infrared port, which will most likely serve as a form of security feature, but we are going to have to wait for more details before this feature has been officially confirmed. There is also going to be a USB-C port, which will increase charging and file transfer speeds. The reason why the battery charging speed will increase is because Xiaomi Mi4c already has a Snapdragon 808, which automatically means that the smartphone supports Qualcomm’s Quick Charge 2.0 feature.

Coming to the pricing details, in our previous report, we stated that the upcoming smartphone’s 16GB model is going to be priced at $235. Now, we have also found out that this price is for the 32GB model. Unfortunately, the price leak for the 64GB version was not specified by the source, but it is possible that some last minute leaks will be able to provide us with sufficient knowledge regarding the price tag of Xiaomi Mi4c.