Xiaomi Mi5 is the name of the company’s flagship smartphone and thanks to an image, it has been revealed that the upcoming smartphone is going to be running Qualcomm Snapdragon 820. Since Snapdragon 820 is made on a smaller manufacturing process, it is possible that it will not suffer from the same overheating issues as devices running Snapdragon 810 were suffering from.

According to a source, given below is an image, where the properties of Snapdragon 820 can be clearly be seen being described in the poster. This poster is what led us to believe that Xiaomi Mi5 is going to be running the new chipset. Other tremendous features of Snapdragon 820 is that it is going to have Qualcomm’s next generation charging feature, Quick Charge 3.0. This feature will be able to charge smartphones running compatible chipsets from 0 to 80 percent in just 35 minutes.

Also, Quick Charge 3.0 might be backwards compatible with previous charging technologies introduced by Qualcomm, but they might not achieve the same level of charging performance as this newly announced tech right here. Snapdragon 820 will also have X12 LTE, which will be able to satisfy speeds of the Cat 12 standard, meaning that maximum theoretical download speeds will reach 600Mbps. 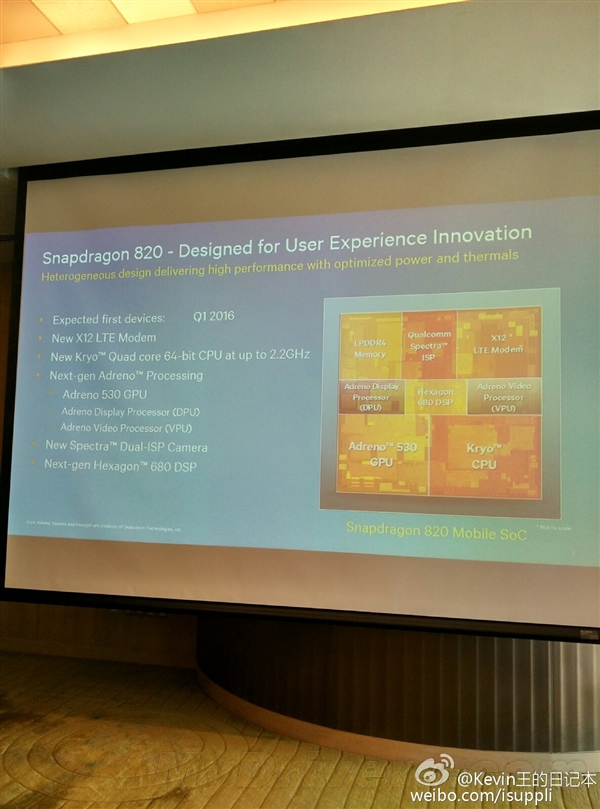 The processor however, is going to be much different that the octa-core chip in Snapdragon 810. Instead of having eight cores, Xiaomi Mi5 is going to be powered by four custom made cores that will have a clock speed of 2.2GHz. There was earlier benchmarking leak showing the impressive score obtained by the smartphone, so it is highly possible that the upcoming gadget will be able to achieve the same result.

4GB LPDD4 RAM is bound to be present inside Xiaomi Mi5, along with a dual-camera setup. We are hoping that Xiaomi Mi5 trumps the company’s Mi Note Pro in every way imaginable when it is officially announced.