Snapdragon 810 might be a very powerful chipset, but due to its design flaw, it is unable to keep the octa-core processor within thermally stable, which leads to a ton of performance issues. This is where Sony placed a very efficient cooling system that would keep the temperature of the processor within its thermal limits. With a 4K display incorporated to the 5.5 inch smartphone, you can expect that extra load will be placed on the processor, which would have raised the temperature even further.

However, Sony was well aware of this issue and decided to incorporate a very efficient cooling system that includes two heat pipes and thermal paste that have been placed directly on the chipset as you can see in the image. With the thermal paste, the heat will evenly spread to the remaining corners of the SoC, allowing the heat pipes to do the rest. 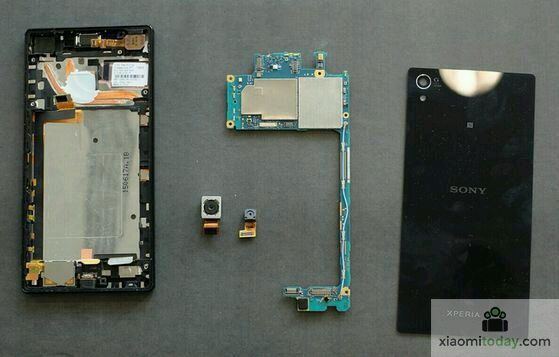 According to a source, when tests were carried out on Xperia Z5 Premium, the device did heat up, but it did not come close to the heat generated by Xperia Z3+ and Xperia Z4, indicating that the thermal solution worked quite well in Sony’s favor. The company has learned its lesson as you can evidently see. In addition, not only has this cooling system been implemented in Xperia Z5 Premium, but also in Xperia Z5, and Xperia Z5 Compact, since both of these handsets also feature the same chipset as their phablet sized counterpart.

The remaining specifications of Xperia Z5 Premium includes a gorgeous 4K display, coupled with 3GB of RAM, and a very large 3,430mAh battery. The phone will be running Android Lollipop 5.1 when it is available during the month of November, which obviously means that it will be upgraded to Android Marshmallow when a compatible version for it becomes available.