If you thought that OnePlus One was the cheapest Snapdragon 801 smartphone that you will every lay your eyes on, then we have another surprise waiting for you in the form of Infocus M810T. This smartphone only carries a price tag of 9.99 by using coupon:M810TGB, which makes it even less than half the price of the 16GB storage model of OnePlus One. However, will it perform well in our review and win the title of being the most affordable and best performing Snapdragon 810 around? Let us find out in order to be really sure about it. 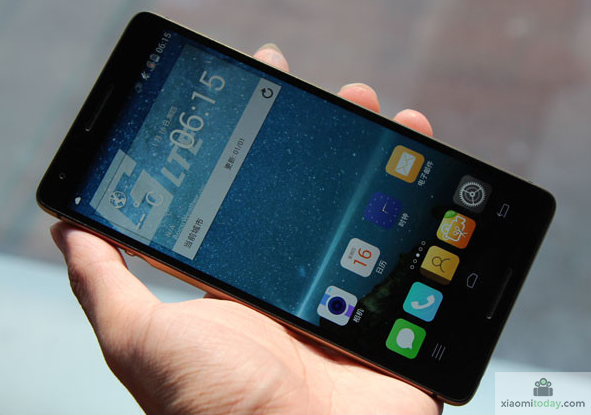 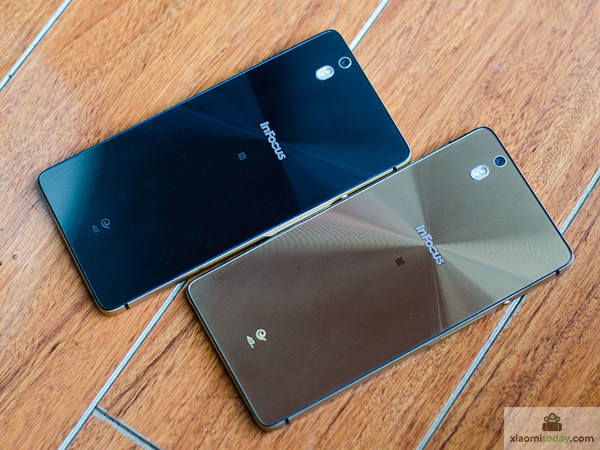 For smartphone consumers that judge mobile devices based solely on their appearance, we are confident that you will give Infocus M810T the highest possible rating in your opinion because the smartphone looks absolutely gorgeous, particularly from the rear side. At the rear side of the device, you will clearly be able to view the prominent company’s name engraved, along with a very shiny, and somewhat sparkly appearance of the chassis. Out of all the colors available, we fell in love in the gold variant, because it looks downright breathtaking, and we have a feeling that you will agree with us on this. 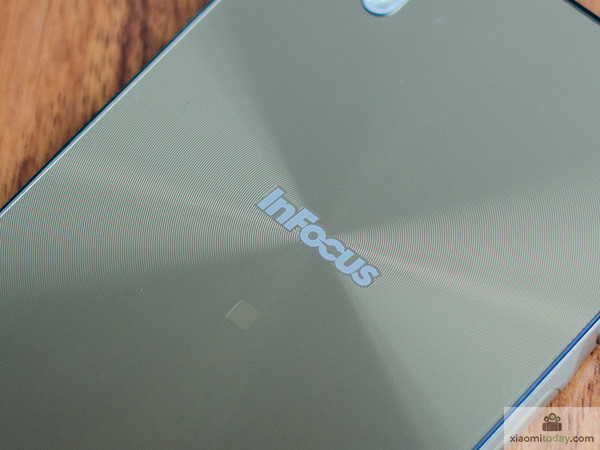 When we held the smartphone for the first time in our hands, Infocus M810T actually felt like a solid handset, unlike some Chinese ones that feel extremely delicate and flimsy. As far as build quality goes, it looks like the company has spared no expense in incorporating a very robust body. 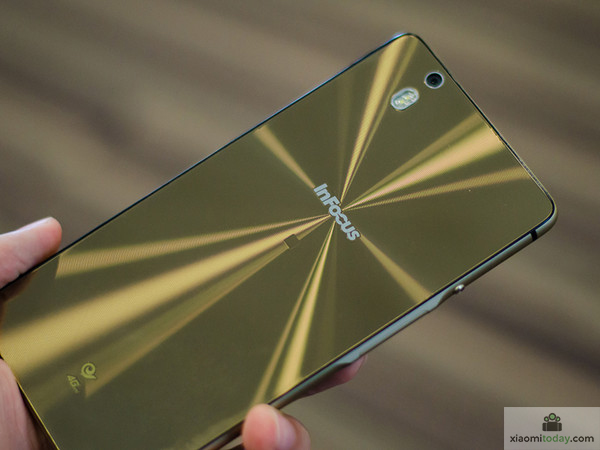 While we are not too concerned about this segment, there are still some things that we have to point out to you guys, especially if you intend on purchasing this smartphone. Starting off, the power button is present directly above the volume buttons, which are surprisingly present one the left side of the smartphone rather than the right. While this is strange to see, what we did find was that Infocus M810T features two slots on the right hand side, where users can insert their SIM, as well as a microSD storage card (keep in mind that the capacity limit is 64GB). 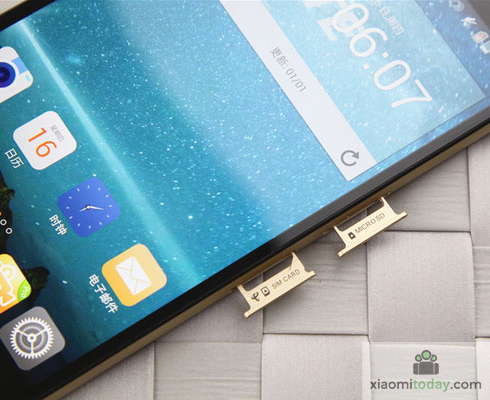 When we held the smartphone, it did take us a while to get used to the button placement, since we aren’t used to the power and volume buttons being on the opposite side of the device. Another thing that we noticed was that the microUSB charging port and the 3.5mm headphone jack were both present on the bottom side of the smartphone, which is very unusual for such a placement. Regardless, we were happy to see that there was ample distance between both ports, allowing you to charge your device, and plug in headphones or earphones at the same time without any cable obstruction being caused in any manner. 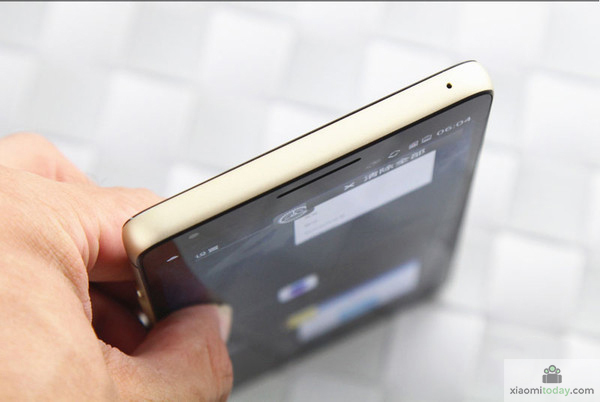 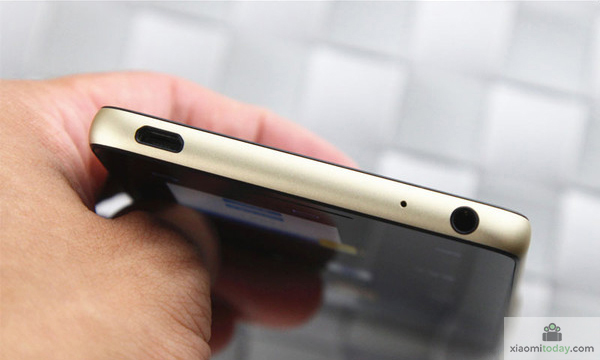 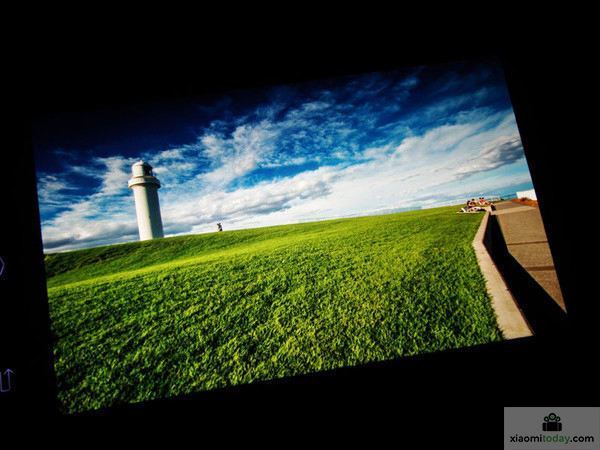 Infocus M810T features a 5.5 inch display that renders a resolution of 1920 by 1080 pixels. While Super AMOLED type displays look the best, we have to say that the IPS panel present on this device made every single thing look extremely detailed and decorated. During the daytime, the anti-reflective property of the IPS panel made it extremely simple to view the screen without adjusting the brightness all that much. 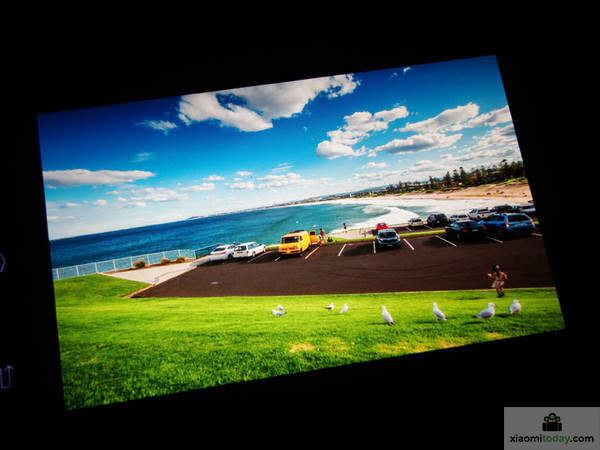 Several readers over here must be thinking that while viewing content in the dark would be very discomforting to our eyes, we have to say that the experience is far more pleasant than anything that we have ever seen before. The visibility of the content was exceptional, and the display was extremely vibrant. Image quality would not decay if we tilted the screen, which shows that the company invested a great deal of effort in incorporating a very high quality display, just so we get the best possible viewing experience according to the price we pay. 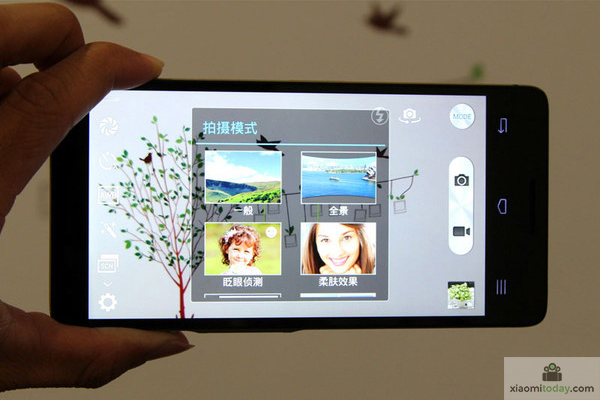 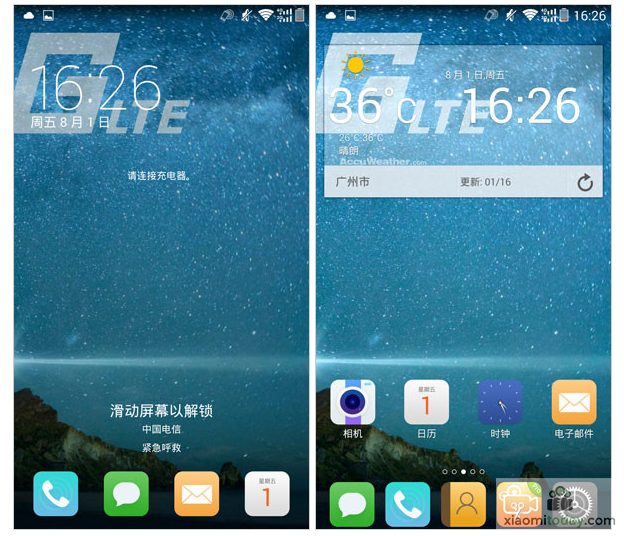 While we were hoping that the smartphone was running Google’s Android Lollipop update, KitKat 4.4.2 was still running smoothly. The stock interface that we were getting used to was what the company refers to as InLife U, which is by far, much better in functionality as compared to what you normally get to see in Android handsets. Starting off, the interface is very simple in aesthetics and design and in order to deliver the most amount of performance, it features a flat design, with strong yet ‘not too flashy’ app icons that make the interface as smooth as butter and looks good on the eyes as well. 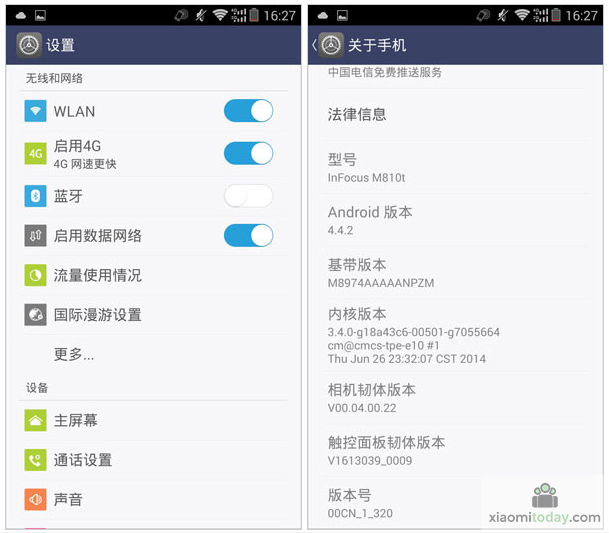 One thing that we loved about this interface was that when we swiped our thumb or finger from the top of the screen, there would be a whole list of options to choose from, ranging from Wi-Fi, to airplane mode, to NFC connectivity to flashlight and so much more. This is something that we prefer much more than going all the way in to the settings section over and over again in order to toggle the basic connectivity features. The company has also placed in a power saving mode that limits the processor’s capability, but gives you a whole chunk of battery life in return. 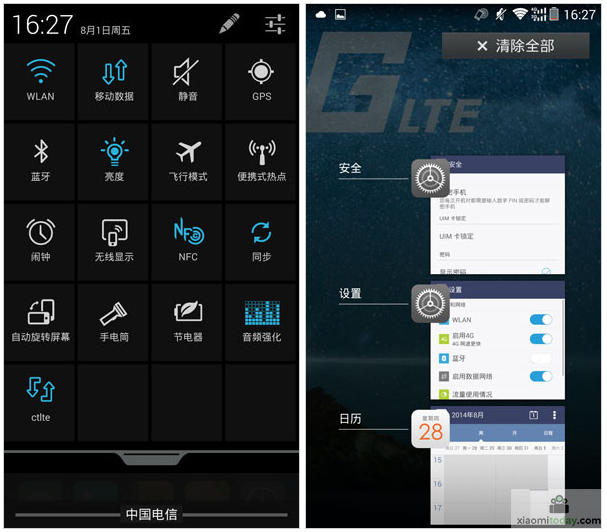 If you want our verdict on the interface, then we will give it full marks on not just performance, but also on the ease of usability, and the amount of functions that you are able to execute from just the home screen, and that too without requiring the settings application to do so. 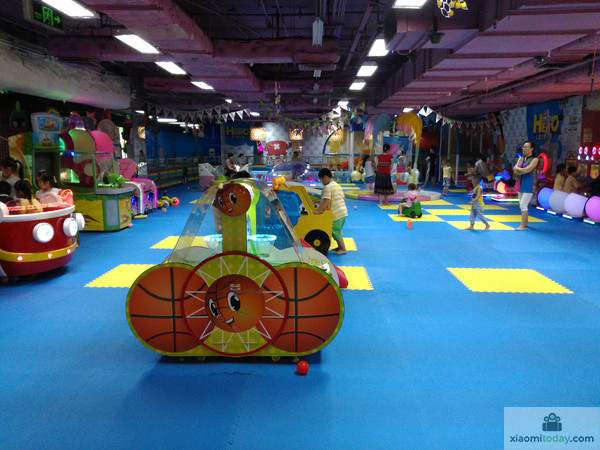 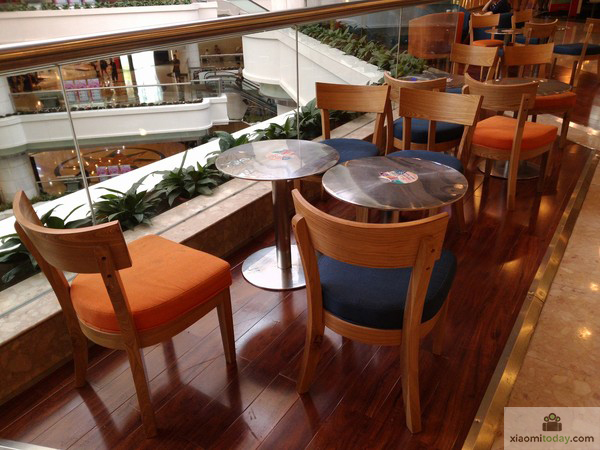 Coming to the image results of the primary camera sensor, we were amazed to see the image quality of the rear shooter, even after we decided to see how the images would turn up if we decided to zoom in on an object. The results were quite impressive, as you will see from the images that have been posted below. While these is not DSLR quality images, we still got to experience the next best thing. 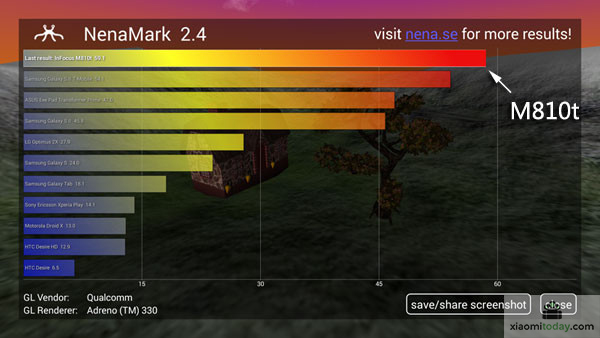 Now let us come to the core segment as to why consumers want to purchase a smartphone in the first place? Raw performance. We fired up AnTuTu to see how the device would fare when pitted against the remaining competition and we have to say that the smartphone was nothing short of impressive. Even though it features the same hardware specifications as HTC One M8 and Galaxy S5 (Snapdragon 801 along with 2GB RAM), our smartphone still performs much better than these two and we know the reason why. 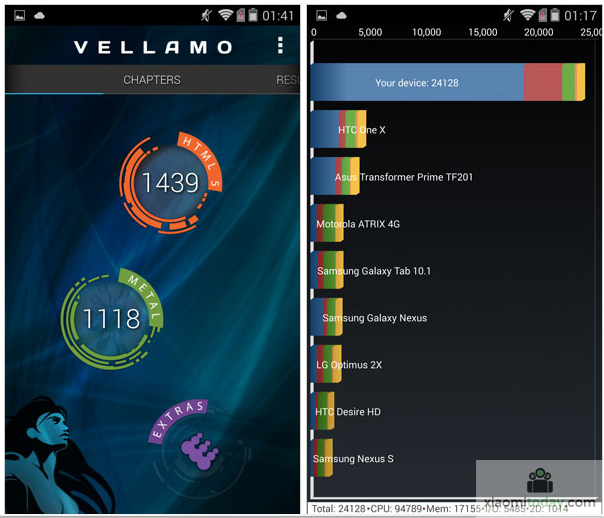 The custom interface, which features a flat design, has been optimized for performance and gave us the extra bit of kick that we needed since it did not consume as much system resources as the taxing interfaces that belong to both HTC and Samsung. This also shows that the firmware optimization is also up to the mark. We were also able to take out time to conduct other benchmarking tests, as you can tell from the images below. In order to see how your device fares against ours, we highly recommend that you run the exact same tests on your own smartphone and let us know how it performed. 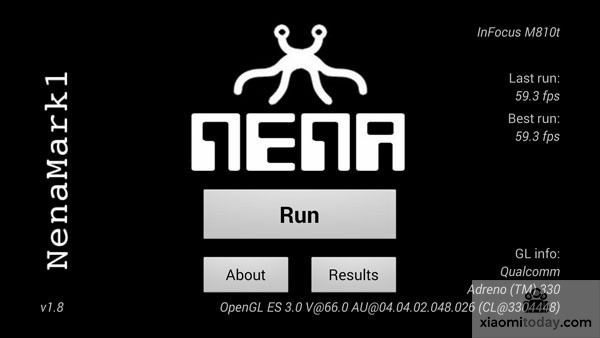 Coming to the connectivity side of things, we fired up 4G connection and immediately ran a speed test to see what kind of results we would get. Since China Telecom is known for its blistering speeds, particular on the 4G network, given below is the speed that we got after successfully running the test.

We were concerned about the 2,600mAh battery present inside Infocus M810T, but after running the tests, we are able to happily able to say that the mobile device was able to give us slightly over 12 hours of battery life. When we executed the power saving mode, we got a little over 14 hours, which is impressive indeed. However, if you are running the 4G connectivity mode, then you should be warned that the modem consumes a ton of battery power because we were only able to rake out a little over 7 hours.

So unless you really need to use the 4G connectivity, we would recommend you to disable it.

After looking at each and every aspect of Infocus M810T, we have summarized the following scores below:

Not only is Infocus M810T a highly affordable handset, but it exceeds the performance levels of both HTC One M8 and Galaxy S5, both of which are much more expensive than the smartphone we reviewed today. Despite the fact that the button placement was a little out of place and battery life suffered slightly while connected to the 4G network, we could not be happier with the device we received to give our thoughts over. If you happen to be in the market, and are looking for a sub-$150 priced handset, then set your eyes on Infocus M810T, because we doubt that you could ever get a deal as sweet as this.