Samsung’s Exynos 7420 chipset has no proper rivals at this current time and the company will definitely be taking advantage of this by supplying its 14nm FinFET chip to smartphone and tablet manufacturers. On this occasion, the latest tablet that has been leaked to feature the company’s ultra-powerful mobile chipset is Kalos 2.

Kalos 2 is a tablet that belongs to Bungbungame, a Taiwanese OEM. Very little is known about the manufacturer, but according to a hardware leak coming to us from China, we now know that Kalos 2 is going to be a very powerful slate. While the screen size of Kalos 2 was not mentioned, we were able to make out from the leaked images that the upcoming tablet is going to possess a screen resolution of 2560 by 1600 pixels, indicating that we could be seeing a large screen after.

Perhaps the biggest highlight of the tablet will be that it is running Exynos 7420 and possesses a thickness of just 6.3mm. That’s not all that Kalos 2 features; there was more information stating that the tablet will be running Android Marshmallow, which only means that consumers will be able to purchase the supposedly large screen product during the later months of 2015. 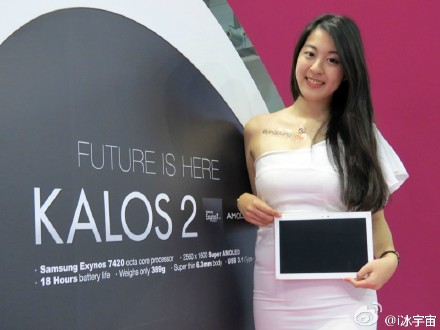 Despite the large amount of pixels that are going to be rendered by Kalos 2, the leak also states that the product will be able to give 18 hours of battery life, which only means that we could be seeing a very large battery incorporated in to the tablet. Additionally, there is also Type-C USB 3.1 port, which will be able to deliver phenomenal transfer speeds when users want to shift content between one machine to the other.

Pricing details were not mentioned by the source, but if it Kalos 2 is running an Exynos 7420 and gives off a resolution of 2560 x 1600, then you can expect that the product is not going to be cheap by any means.