Xiaomi Mi5, the Chinese tech company’s upcoming flagship smartphone is not only going to feature impressive hardware but a very affordable price tag as well. According to the latest price leak coming in from China, we now know that the upcoming high end smartphone is going to retail for 9. If the price tag happens to be true all along, then Xiaomi Mi5 is going to be slightly more expensive than OnePlus 2, but you also have to keep in mind that it will sport really impressive specifications as well.

Coming to the hardware side of things, Xiaomi Mi5 will probably feature a Snapdragon 820, which will be made on Samsung’s 14nm FinFET process. From what we know so far, the chipset is going to sport a quad-core processor instead of an octa-core one, and the custom cores running inside Snapdragon 820 will most likely be running at a clock speed of 3.0 GHz. It short, the chipset is going to be able to deliver performance far beyond the capabilities of Snapdragon 810. 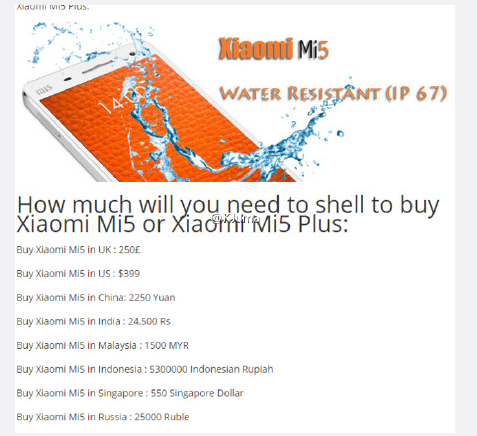 Other specification details of Xiaomi Mi5 include 4GB RAM, which was expected considering it is a smartphone that is going to be available in 2016 and a flagship one at that. The screen size of the smartphone will most likely be 5.2 inches and will be rendering a resolution of 1440p. We have reason to believe that the device will also sport a 16MP rear camera sensor.

Like all Xiaomi flagship smartphones, Mi5 will definitely not support microSD cards, and will most likely be coming in the 32 and 64GB models. It is possible that Xiaomi Mi5 comes in with much more storage, but we will get to know more about this when 2016 starts. The image also states that Xiaomi Mi5 is going to be IP67 certified, which only means that the smartphone is going to be water resistant till a certain amount of depth.

We sincerely hope that the leak turns out to be true since it will mean that more and more consumers have a chance to experience Android at its finest in terms of speed.