While Xiaomi Mi Note Pro proved to be a very capable smartphone, the company will be looking to raise the bar in terms of performance with the release of its Mi5. After witnessing the Xiaomi Mi5 benchmark, we have to say that we expect the device to come packing with some serious hardware, with the most notable being the chipset, which will most likely be Qualcomm’s Snapdragon 820. However, since Snapdragon 810 was not the most thermally efficient chipset present in smartphones, Xiaomi could be looking at alternatives, such as MediaTek’s Helio X20.

Coming straight to the Xiaomi Mi5 benchmark, the smartphone was able to obtain a terrific score in the popular application AnTuTu. Not only is the handset able to beat devices like Galaxy S6, but the Xiaomi Mi5 benchmark also reveals that the smartphone is able to gain a comprehensive lead over its rivals. This only means that Samsung is going to have to begin incorporating even faster chipsets in its upcoming smartphones in order to surpass this score. 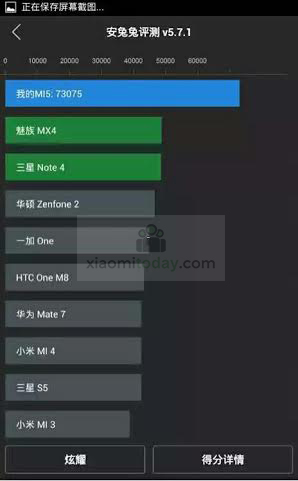 If Xiaomi Mi5 is released in 2016, then there is a high chance that the smartphone is going to be running Snapdragon 820. If the handset ends up getting released this year, then there is a very high probability that the device will be sporting Helio X20, which runs a 10 core processor. Looking at the score, we would have to settle with Helio X20, since that is the only chipset right now that can exceed a score of 70k in the same application.

That high a score is the result of the chipset featuring two Cortex-A72 cores instead of Cortex-A57, along with eight Cortex-A53 cores. Before we jump to conclusions, these scores could also be the result of Snapdragon 820, but in order to receive this confirmation, we are going to have to wait for Mi5 to get officially announced. Regardless, those scores look really impressive and we cannot wait to get a glimpse of what Xiaomi has in store for us later in the year, or in 2016.