Huawei’s upcoming Kirin 950 SoC is not exactly a secret anymore. The chipset will be manufactured using TSMC’s 16 nm process. According to latest news, the chipset is said to available for Huawei’s next generation flagship, and will start shipping from October this year. The chip will most probably be manufactured using TSMC’s 16 nm process, but Samsung (with its 14 nm process) is also said to be in running to get the order. The South Korean manufacturer is said to be the major supplier for Apple’s next generation A9 chipsets, which will be found in the company’s upcoming range of iPhones and iPads.

Just like the Kirin HiSilicon 935 SoC, The Kirin 950 will also reportedly have an integrated 64-bit octa-core CPU, with four Cortex A53 cores clocked at 2.4 GHz and four Cortex A72 cores slightly lower in all possibility. The Cortex A-53 cores will be clocked up to a frequency of 2.4GHz. The GPU with this chipset has been upgraded as well, and will be ARM’s Mali T880, while the chip will have integrated support for dual-channel LPDDR4 (25.6GB/s). The SoC will support up to 42 MP camera, NFC, USB 3.0, UFS 2.0, MU-MIMO a/c/ Wi-Fi. All in all, the chip will definitely be competing with the very best in the business like Qualcomm’s upcoming Snapdragon 820 chipset. The Kirin 50 SoC will also be the first commercially manufactured chip to have support for Category 10 LTE. The chipset is also said to come with support for Bluetooth 4.2.

While it is not an absolute certainty, given the timing of the chip’s availability, it might be the one chosen to be used in to company’s upcoming Ascend Mate 8 phablet. The company’s current flagship, the Ascend Mate 8 (known as the Glory 8 in the Chinese market), comes with the HiSilicon Kirin 935 SoC. 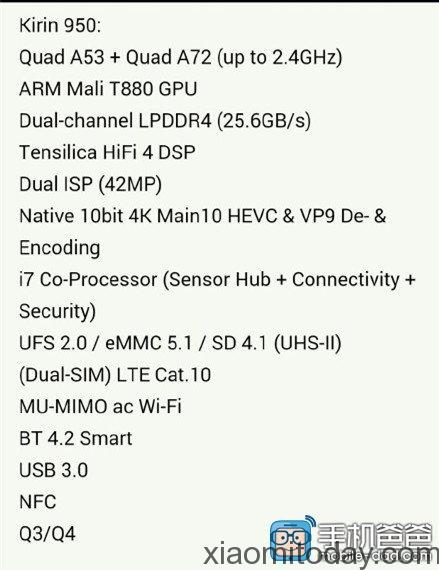