If you have got or ready to buy Mi4 / Moto X / Samsung Galaxy S5 in one, I hope this can help you beat the performance of the machine, There is a general understanding. All the pictures are of night and low light as In daylight, almost every Camera does a good job.

On the left you have Moto X, in the middle is the Xiaomi Mi4 and on the right is Samsung Galaxy S5 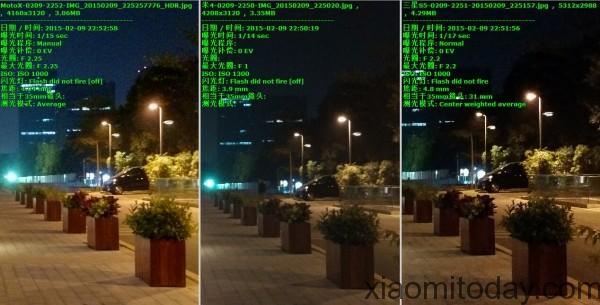 In superweak outdoor lighting, motoX and Samsung S5 has soared to the ISO 1000, Mi4 soared more to 1300; and the shutter speed is very close, but the Samsung S5 of 1 / 17s to be a little faster, a little higher piece rate .

Screen brightness, motoX higher length, followed by Samsung S5, while in Mi4 as the Night Mode was not opened, it had to come with this low brightness. Noise aspect, motoX successfully erase ground noise but then the sky weakness; Samsung S5 contrast, although the night to get the noise, but the noise floor and the scene is obvious; Unexpectedly, ISO of Mi4 was highest but in noise controt it was the best .

Analysis of the force on the Samsung S5 is the only way to look at the vehicle center of the screen next to bamboo outline of the machine, but it is more accurate and algorithms focus merit, but on the floor it was the worst one detail. 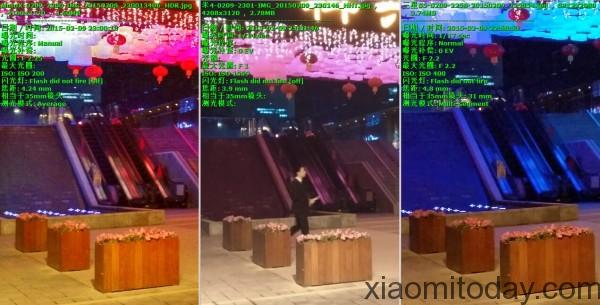 Although the noise motoX most serious, but retain up picture detail, analyzing the force best (details artificial waterfall staircase and left escalator up); Mi4 after opening night mode, screen brightness was about the Samsung S5, but still lower than Samsung S5, and coated with a layer of fog like the picture, but the picture noise is successfully removed; Samsung S5 trailer, even after sharpening, but the left side of the artificial waterfall and ground details are almost completely lost. 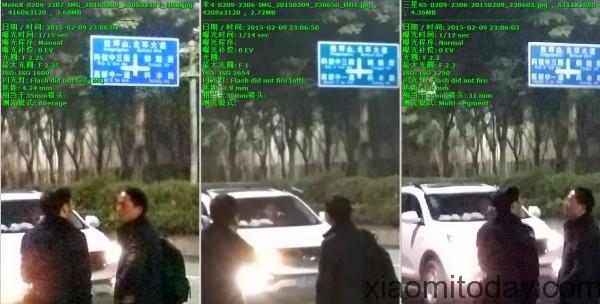 Side of the road with signs for focus, zoom back to the same size. Three metering machines are very close, but this time motoX of ISO 1600, the Samsung S5 for 1250, while Mi4 has soared to 2654.

Moto X has noise exaggeration, but you can barely recognizable characters on signed coke , and after a sharp sharpening like Samsung S5, are difficult to iden and Mi4 IMX214 and ferocious smear with algorithms, the picture of the cleanest, but instead let the proofs like misalitify signs fonts. 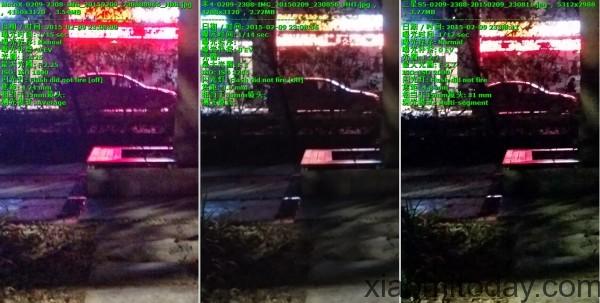 In this extreme environment, the three machines are already in use close to the maximum of ISO, so do not drag on the screen to open the gap between the details, motoX still serious noise, S5 full screen is grainy noise sharpening smear again, Mi4 is a heavy-handed smear.

In this complex environment lighting, white balance, a larger gap between the three machines, motoX closest to the truth, but surprisingly brilliant green (lower left corner of the grass); Mi4 was bluish, yellowish on Samsung S5. 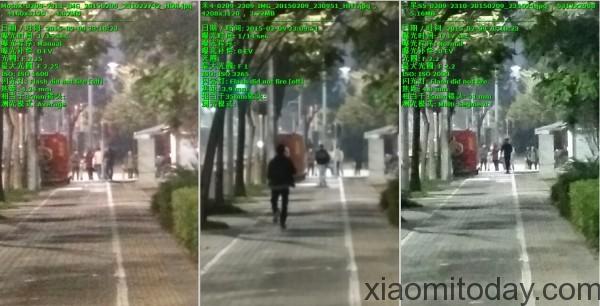 motoX has a warm yellowish white balance, Mi4 slightly colder bluish, while S5 is greatly greenish, the first impression is the best detail in S5, but in fact only a sharpening of the credit (lower left corner of the ground and in the upper right corner leaves no detail sacrifice), no sharpening and a night mode smear motoX retain more detail in; Mi4 still did not like to focus on. 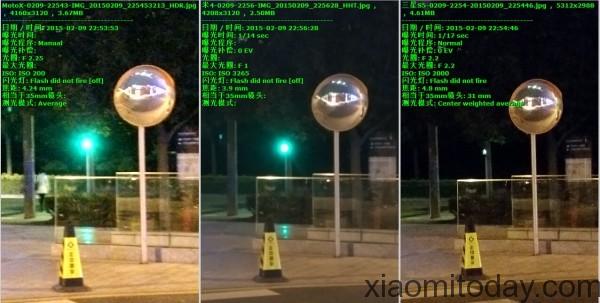 If I give them the ability to rank night shoot, the result will be: motoX> Samsung S5> Mi4.

Although motoX noise everywhere, but wins in the high screen brightness, the first impression is good, but actually make noise after ignoring details of the performance is not bad, and fast imaging camera experience good; Samsung S5 of ISOCELL low light deficiencies, there are also powerless fury algorithm days, the sensor can not catch the details of the algorithm do not deal with how to engage in all out; it is most unfortunate mi 4, it takes IMX214 to help themselves to capture the details are rare smear out.