Earlier this year, Xiaomi unveiled a brand new lineup called as the Mi Note which marked the company’s entry into the phablet market. Until recently, Samsung’s Galaxy Note lineup have always been the go to device when it comes to large screen phones but things have changed in the past two years. The arrival of the iPhone 6 Plus as well as other competitors including the new Mi Note has made the competition fierce in this segment.

So, today we decided to take a look at the two popular phablets of Q1 2015, namely the Xiaomi Mi Note vs Galaxy Note 4. While there are two different variants of the device, we will take a look at the Snapdragon 801 powered Mi Note instead of the Mi Note Pro. Even with the slightly lower specs, the device is fast enough to compete with a mighty device like the Galaxy Note 4. 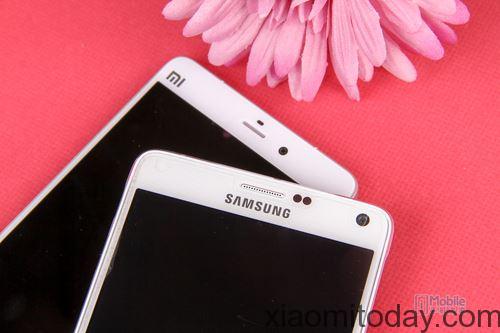 The first thing that comes to mind when we look at the two devices is the difference in the built. Both have a candy bar design, however, the Samsung Galaxy Note 4 looks targeted at business class of users while the Xiaomi Mi Note’s design gives it a trendy look. From the front, it may be a bit hard to distinguish, however, the sensors on the Note 4 are much more darker and prominent than the Mi Note. Also, both the phones have their respective company logos right up front, which clearly defines the maker. 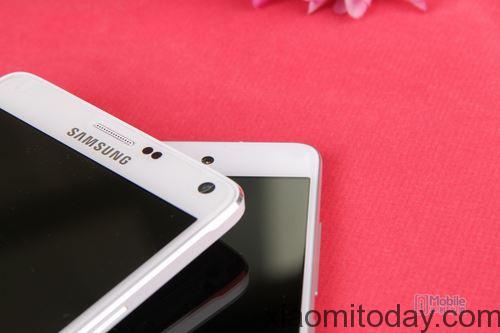 Below the display lies the trademark Samsung home button with fingerprint recognition. On the other hand, the Xiaomi Mi Note has just three capacitive buttons without a physical button. Both have the MicroUSB port at the bottom, however the Mi Note has the speaker grill at alongside the port. 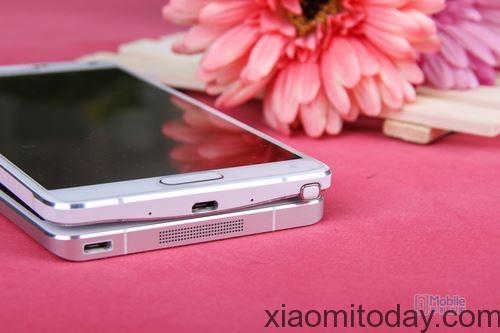 The back is made of glass on the Mi Note, however the Note 4 features a leather back like its predecessors. This increases the thickness of the device considerably. So the dimension of the Note 4 are 153.5 x 78.6 x 8.5 mm as compared to 155.1 x 77.6 x 7 mm. So, the Mi Note is much slimmer than the Samsung flagship and infact, its almost the same thickness as the iPhone 6 Plus. 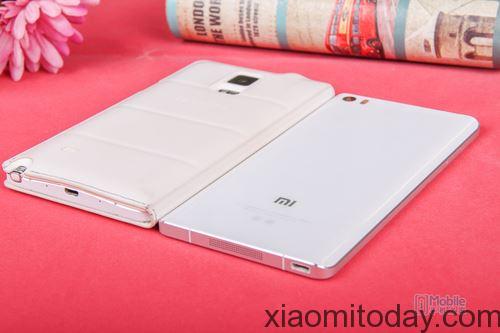 One important factor that distinguishes the Note 4 from the rest is the stylus. You can do a lot with the new Samsung stylus and it does give the users a better experience as compared to the regular touch especially when using the phone for business needs. 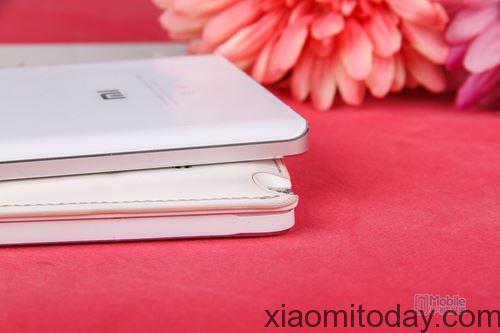 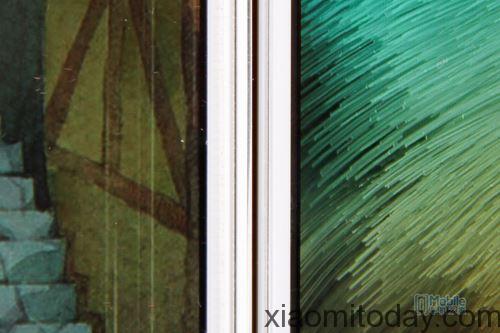 Display is considerably different in both the devices. The Xiaomi Mi Note comes with a 2.5D 5.7-inch IPS LCD screen with Full HD 1920 x 1080p resolution. On the other hand, Samsung relies on its own 5.7-inch Super AMOLED 2.5D display with a much higher resolution of 2560 x 1440 pixels. This increases the pixel density of the device to well over 500 ppi! Also, the Note 4 comes with a newer generation Corning Gorilla Glass 4 as compared to the Gorilla Glass 3 on the Mi Note.

Super AMOLED display are known for its excellent color reproduction and you will notice the slight difference in colors with increased usage. Still, both the displays are quite sharp for everyday usage.

Performance should be more or less the same, however, the Galaxy Note 4 does have a slight edge due to its latest Snapdragon processor. It comes with Snapdragon 805 chipset with four cores clocked at 2.7GHz. On the other hand, the older Snapdragon 801 inside the Mi Note features four cores clocked at a slightly lower 2.5GHz. The GPU is also older on the Xiaomi flagship, Adreno 330 instead of Adreno 420. Both feature 3GB RAM but storage options differ. The Note 4 comes with a fixed 32GB internal storage but with MicroSD expansion, while the Mi Note has 16GB / 64GB options with no MicroSD card slot. 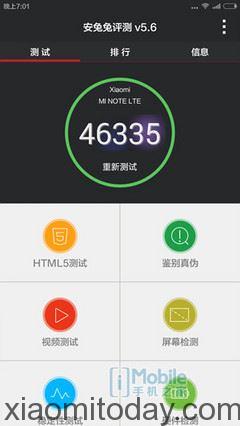 As you can see, there are some differences between the two models when it comes to hardware specs, however, when it comes to real life performance, the difference is not that evident. For example, in the AnTuTu benchmark tests, both scored in the 46,000 mark which is pretty impressive. Note 4 scored 46,972 while the Mi Note with the older Snapdragon processor scored 46,335. This clearly shows that both the devices are capable of handling everything that you throw at it. Gaming and app performance was above average and there were no visible lags even while playing graphic intensive games, thanks to the powerful Adreno GPUs.

Even with the 2K display and a more powerful CPU, the battery life on the Note 4 is better than the Mi Note. This is because, Note 4 features a larger 3,220 mAh battery as compared to the 3,000 mAh one found on the Xiaomi Mi Note. You can get about 20 hours of talktime on the Note 4 with this battery, however, Mi Note struggles to get near the 20 hour mark.

Both the models have all the standard connectivity features that you would expect in a flagship device, like dual Band Wi-Fi, bluetooth, dual card dual standby and 4G LTE networks. 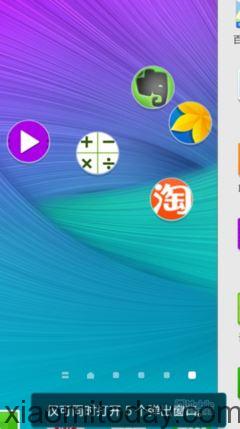 In this category we can easily pick out a winner. MIUI 6.0 has proved to be a very advanced update likes by many. The UI looks much refined and better than the boring cluttered Touch Wiz. Xiaomi UI is also much more colorful than the Samsung’s OS. Both are built on the Android 4.4.4 KitKat version and both are expected to be updated to Android 5.0 Lollipop soon. In fact, the Lollipop update for the Note 4 is almost confirmed and should be rolling out soon.

Hopefully, the new TouchWiz UI with flatter icons and much more fluid interface should make it to the device by an update. Samsung is expected to reveal the new OS on Sunday, and we hope that its as good as rumors say it is. 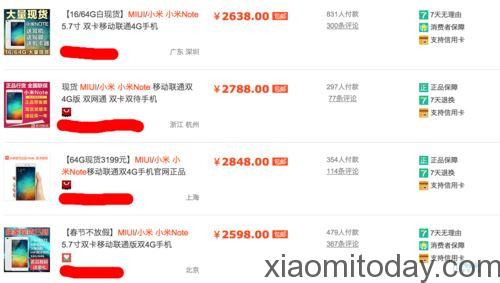 Pricing is of course much cheaper for the Xiaomi Mi Note. However, availability is the big issue here. Xiaomi only sells the device in China that too just once a week. So, getting hold of a Mi Note is extremely. You can of course resort to third party websites for the purchase, however, you will have to shell out anywhere between 2500 Yuan ($400) to 29000 Yuan ($465) for the device which has a retail price of 2800 Yuan ($370).

On the other hand, the Samsung Galaxy Note 4 is readily available for purchase right now but at a much higher price tag. You will have to shell out somewhere around $650 to get an unlocked version of the device. However, on contract you can get it at just $200.

To be honest, both the devices are extremely powerful and well built. Note 4 does have some extra features such as a finger print sensor, but if you are not really a big fan of those, Xiaomi Mi Note looks like the best value for money product. Its almost $200-$250 cheaper than the Note 4 which gives a very good reason to buy it as compared to the Note 4.

So, which one will you purchase? Xiaomi Mi Note or the Samsung Galaxy Note 4?