Today, we’re sharing a unique comparison of Mi Note with Huawei Honor 6 Plus. It’s not about specifications or features. It’s about the temperatures of the two phones, we’re comparing both these phones with their heat maps. For comparison, the images shot are using infrared cameras to make a heat map of the phones, comparing them for the temperature in the phones after using.

The camera is one of the main selling point of Huawei Honor 6 Plus, with it’s dual camera on the back. Mi Note is also having an awesome camera, as anyone following Xiaomi would agree. Take a look at these pictures, shot after using the phone camera for around 30 minutes at 25 degree room temperature. After this usage, the infrared cam is used to photograph the heat map of the two devices. 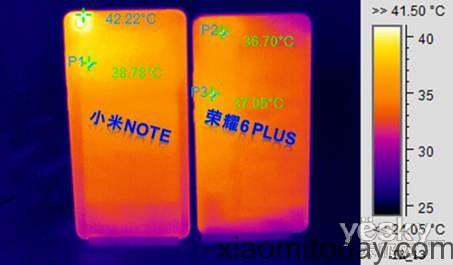 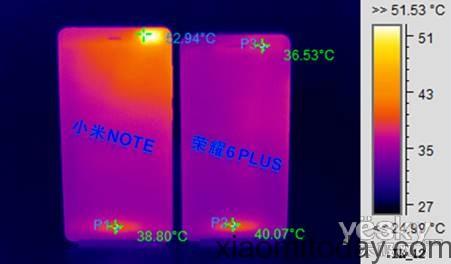 We can see from the pictures, after 30 minutes Honor 6 Plus’s maximum temperature is only 40 degrees, and there is a uniformity in the temperature over the device, which gives it a better overall experience. The Mi Note has a totally different heat map, it have temperatures close to the maximum 53 ?, which makes it a hot device to handle. The  temperature is this high only at the places near camera, both front and rear. Think about it, will you take a phone call which comes at this time? You don’t want a burnt face or ear, right? The bigger battery of the Mi Note has also to be taken into account here, coming at 3000 mAh.

Next up is the 3D Game test, for this the same 30 minutes of the game is played with Mi Note and Honor 6 Plus in 25 degrees room temperature, in the course of playing the game, the Mi Note is found to be becoming more uncomfortable over time. Infrared thermometer at this time has reached close to 50 degree Celsius, no wonder the holding it was uncomfortable. Look at Honor 6 Plus, 30 minutes after the phone is the temperature reached 42.6 degrees, not much cool but it was still cooler than Mi Note, holding it was just warm. So it seems Qualcomm Snapdragon 801 is one hot processor. The Kirin 925 processor in the phone is just cooler than the Snapdragon one. 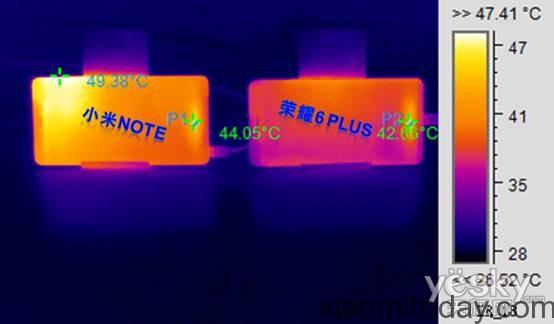 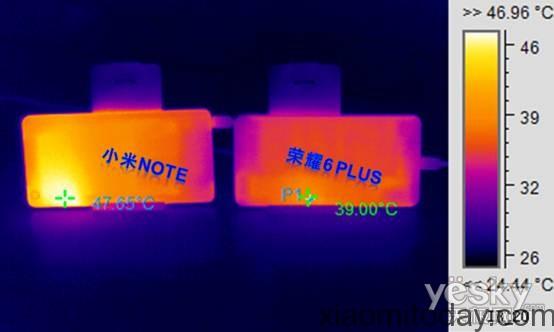 On the final words, I can say that Mi Note is one hot device to hold, but this is not a new thing when it comes to Android devices. But Honor 6 Plus is much cooler device and more comfortable one to use. Thanks to the use of Huawei’s own Kirin 925 SoC, which is used in Honor 6 Plus, the phone is much cooler than the Mi Note’s Snapdragon 801, while offering similar performance.