Xiaomi Mi Band 2 VS Mi Band 1S – Two Generations, Both Different, But which one to Choose?

Whether you love or hate Xiaomi, the fact is that this Chinese manufacturer is the only one from the Eastern Lands who has been able to make a large impact on the world in such a short time. Seriously, this company is responsible for giving Samsung and Apple a tough time. Maybe, that’s why Xiaomi is always the sole reason for our anticipation. But why is Xiaomi that much famous? The credit here goes to their premium products with the best hardware and a budget friendly price tag that you cannot believe. Premium products including smartphones like Mi 4, Mi 5, Mi Note, Redmi Note 3, Smart Home Devices like Mi Cube, Yeelight and so on. Xiaomi not only allows us to feel their presence in Smartphones but also in every consumer product, and the range is increasing month after month. Sorry for that much long introduction, but to explain Xiaomi words are not enough.

Oh, we left one product to inform you about. That product which defined Xiaomi from day one. Meet Xiaomi Mi Band – the only one which was able to sell 10 Million units in 2015, beating Samsung Gear, Google Fitbit, and Apple Watch. So much time has passed and in this time period, Xiaomi launched Mi band successors Mi Band 1S and the latest Mi Band 2. Both are worthy to be the next face of Xiaomi (after Mi Band), but there could only be one best. Which one? Let’s find out in this Xiaomi Mi Band 2 VS Mi Band 1S comparison and review.

Starting with the main body (sensor) of both of the terminals, we see a drastic difference between 1S and Mi Band 2. The skeleton of 1S is based on its descendant Mi Band. It is made up of the military grade aluminium front while the whole body is of polycarbonate with a matte finish. The device has a clean oval shaped design that can fit into rubber bands. The dimensions are 36 x 14 x 9mm and weigh only 5.5 g. It is only 13.5g heavier than the previous model and a little bit thick. This is due to the addition of heart rate sensor.

Whereas, the new Xiaomi Mi Band 2 seems to be slightly larger than 1S both in length (40.3mm), width (15.7mm) and thickness (10.5mm). Obviously, the reason of introducing OLED display is pretty much valid. Even it is much heavier (1.5 g more) with a total weight of 7 g due to the extension of glass and plastic rather than aluminium and polycarbonate. 1S has a matte shine while Mi 2 has a light reflect from the glass. The silver generation has changed to the black one from 1S to 2 respectively.

Yet both the terminals have gold plated charging terminals at the same place, but in Mi Band 2 they are a little bit small and vivid. Sadly, you won’t be able to use bands and charging cables for each other because of the physical similarities.

Mentioning about the bands, the one for 1S is probably thinner than that of Mi Band 2. Even the holes in the band are larger than that of Mi 2. But the band of Mi Band 2 looks more premium with small holes (no loose fitting) and a shiny grayish-black button (rather than the tradition white one). 1S is made up of Thermoplastic El while Band 2 is made of silicon.

When both of these bands are fitted inside the band, 1S appears to be somewhat bulging out of the band, while Mi 2 looks perfectly fitted inside. However, both of them are IP 67 certified, which means that they are waterproof, dustproof and shockproof.

Luckily, in Xiaomi Mi Band 2 VS Mi Band 1S competition each of the bracelet has a PE pulse rate sensor (heart beat) . But, we must tell you that they are not the same. If we look at the back of both devices we will see the actual difference. Xiaomi Mi Band 2 has more area exposed between the sensor and the skin as compared to 1S. Moreover, the company also promises that the algorithms are upgraded in case of Mi Band 2. During the pulse rate test, you can feel the difference between both terminals.

Heading to the latest feature added in the Xiaomi Mi Band flagship, it’s the display. In Mi Band 2, we see a glorious 0.42-inch OLED screen, a technology which is famous for its energy efficient display along with scratch-resistant glass and anti-fingerprint coating. On the OLED screen, parameters like heart rate, time, date and steps can be seen. It is really sad to hear that the screen doesn’t support touch.

Seriously, this is much better than 1S which has no display rather than the three colorful notification LEDs. So you are dependent on a smartphone when it comes to 1S but for Mi Band 2 you don’t have to depend on those lights and your phone to see the readings. So here in terms of display, Xiaomi Mi Band 2 takes the lead in Xiaomi Mi Band 2 VS Mi Band 1S competition.

It is interesting to know that even with the addition of display the Mi Band 2 is able to spend 20 days on a single charge with consistent use. This is the saying of the manufacturers but we believe that it has the ability to last months. For this, we did the battery test and for 14 days the smart band was running and the battery was still above 93% with an average use. To be sure, we want you guys to test the battery if you have Xiaomi Mi Band 2. On the other side, Mi Band 1S was left behind with a large gap in term of the long battery when it powered off after 10 days.

Mi Band 2 has a battery of 70mAh while 1S has a battery of 45 mAh, which is the primary reason for that much gap. But even if we add some extra amperes, still the gap will never be filled. The reason for this is something except the capacity. But what? However, the fact is that still Mi Band 2 smartly outperforms 1S when it comes to endurance in Xiaomi Mi Band 2 VS Mi Band 1S comparison.

In this section, we didn’t see any disagreement between the products. Both have the same Xiaomi app to connect with via Bluetooth 4.0. Indeed, Mi Band 2 has some extra features but that is not app based. For both bands, we see the main page of the app mentioning some features like sleep tracker, heart rate, and others to be selected. The App is available for Android and iOS.

Here are some screenshots of the App: 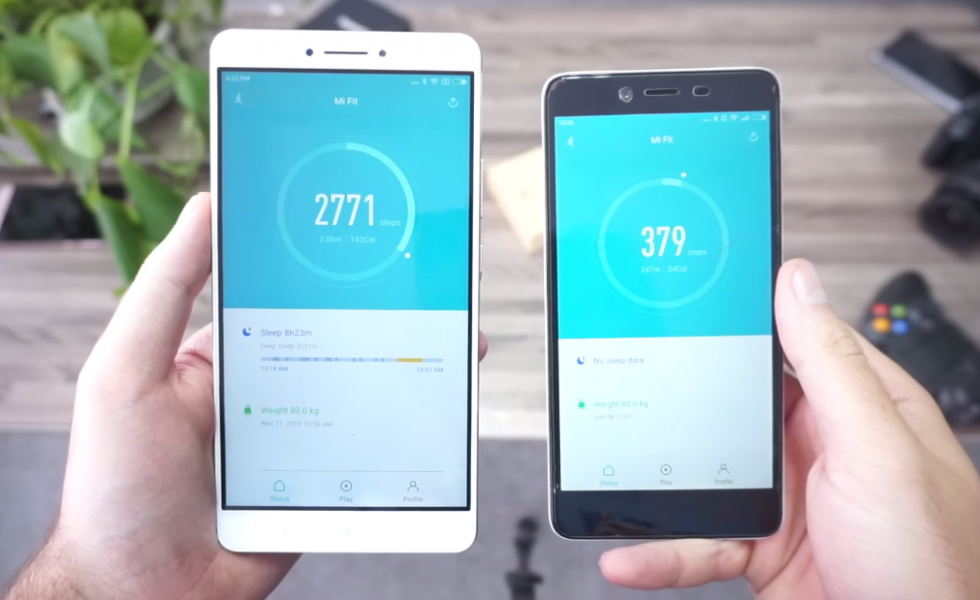 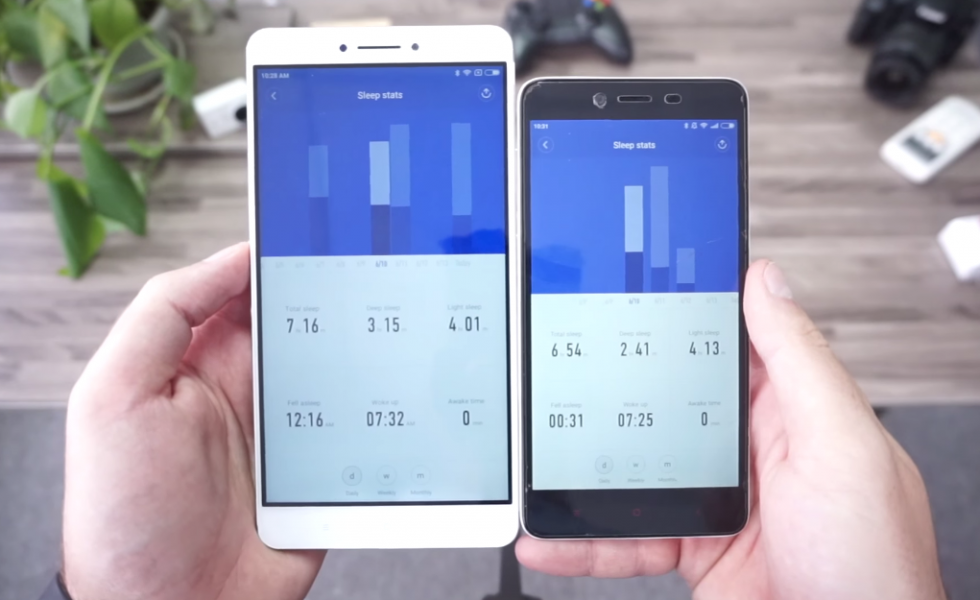 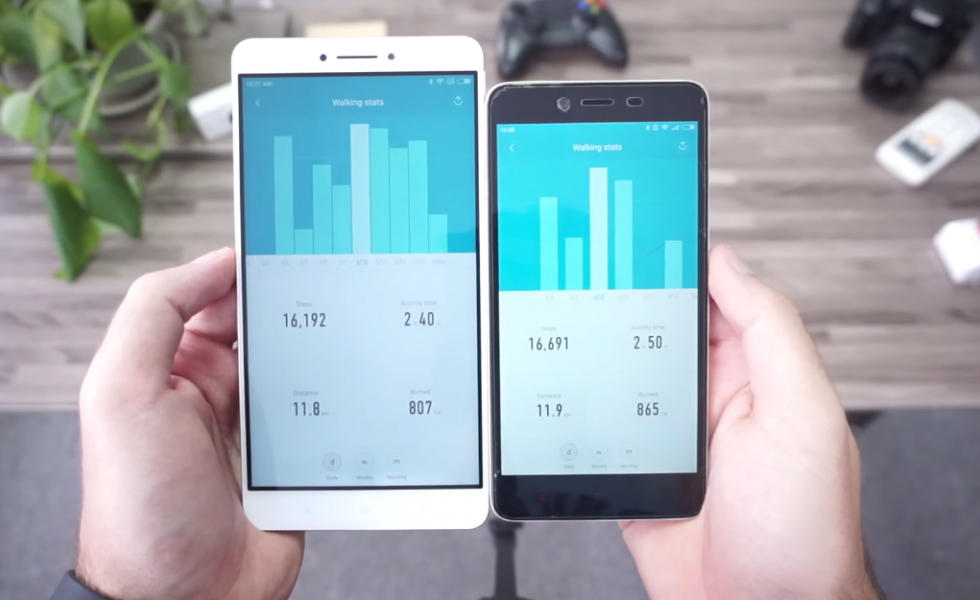 So for Xiaomi Mi Band 2 VS Mi Band 1S competition, in terms of App Comparison, there’s no difference, so it’s a tie.

Apart from the pulse rate sensor both terminals features Pedometer, Sleep Tracker, Message Reminder, Call Reminder and Unlocking of Xiaomi Phones. But the latest Mi Band 2 has an additional feature. This characteristic is associated with the screen which is lift wrist bright screen support. 1S doesn’t have it because it has no screen. Isn’t it funny? Other features which are same in both are way better in Band 2 due to new algorithms. So with improved features and an extra one, Band 2 is better in Xiaomi Mi Band 2 VS Mi Band 1S.

Attention: The internal data of table “111” is corrupted!

And the winner is Xiaomi Mi Band 2 !

If any of our avid readers are interested in buying these products, they can buy Xiaomi Mi Band 1S for a price of $13.59 and Xiaomi Mi Band 2 for $38.19 from Gearbest. We’ll like to conclude this comparison with the buying links below:

If you are also interested in buying any of the accessories of these bands, you can buy it from:

Nubia Z11 Max vs Xiaomi Mi Max : Which one is Better?